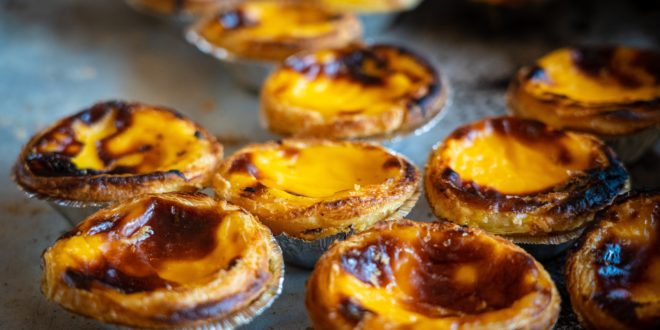 If you’ve been fortunate enough to travel to Portugal, just the thought of a Pastel de Nata will be enough to make you feel nostalgic. This foodie centric country isn’t short of sweet treats. And in popular cities such as Lisbon or Porto, you’re never far from a bakery selling all manner of sugary temptations.

But nothing can quite beat the Pastel de Nata. Crispy pastry forms a case for the soft, sweet, custardy filling, with often a hint of cinnamon coming through. Each region and each baker will have a slightly different twist on the recipe, but for the most part you can expect a mouthful of flaky pastry, complimented with a hit of custardy, sugary deliciousness.

Pastel de Natas are sold all across Portugal, but for the original recipe, you have to head to Belém, the place where it all began.

The history of the Pastel de Nata

The Pastel de Nata’s history dates back over 300 years, to Jerónimos Monastery in Belém, west of Lisbon. Today the monastery is a major tourist hotspot and a UNESCO World Heritage Site. But at the time it was a busy civil parish where, in the absence of laundry detergent, nuns and monks would use egg whites to starch their clothes. This process meant there were egg yolks going spare, so to avoid these going to waste, they were instead used as a major ingredient in desserts.

The monks of the monastery soon created a secret recipe to perfect their custard tarts. They began selling as a means of creating income to support the monastery. When the monastery closed in 1834, this recipe was then sold to the owners of the Fábrica de Pastéis de Belém. This opened in 1837, and is the most famous place to try custard tarts in all of Lisbon. Today, the recipe is still a closely guarded secret. The tarts sold in this location are known as Pastéis de Belém. Just a three minute walk from the monastery, they’re a must try for anyone keen for a little bite of Portuguese history.

The taste of a Pastel de Nata

A cross between a custard tart and a cake, the Pastel de Nata is small whilst packing a sugary punch. The outside of the art is made from crispy, flaky pastry, whilst the inside is a creamy, custardy mix. When baked, the tart is caramelised on top and ready to eat. Our advice is to eat them fresh from the oven, dusted in cinnamon or icing sugar. Saving them to eat the following day could result in the pastry going soggy.

Where to try a Pastel de Nata in Lisbon

Of course a Pastéis de Belém from the birth place of the Pastel de Nata is mandatory, but elsewhere in Lisbon you can find equally delicious versions. Here’s where to head:

Article in partnership with Trafalgar. Have you tried a Pastel de Nata? Where would you recommend trying one of these Portuguese icons for the first time? 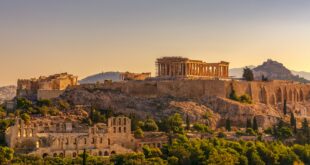 Set high above the city of Athens on a rocky hill, the Acropolis is an ...