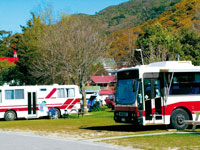 As Havelock plays catch-up to Picton, a favourite holiday destination for boaties, the community-owned Havelock Motor Camp is riding the same tide.

This historic seaside town is to Pelorus Sound what Picton is to Queen Charlotte Sound – a gateway to secluded bays, unspoilt beaches and plentiful fishing grounds.

Over the last two years, since Neville and Pauline Pickering became managers of the Havelock Motor Camp for the Havelock Community Association, the camp has gone from strength to strength.

A big plus for the township, as well as landing managers who have dramatically lifted turnover and the profits churned back into the community, was the re-vamp of the Havelock Marina in 2000.

That has been really good for the camp, Neville says. “Obviously the boating available here makes Havelock very popular. Now we have such excellent facilities, real estate has boomed, and that reflects in the rents people are charging for cottages, but it also means the camp is ticking over really well.”

A former contract shearer in North Canterbury, Neville ran the Great Northern Hotel in Waikari before moving to manage the Trout Hotel near Pelorus for three years.

When the hotel was sold on, he worked in the local mussel factory and in vineyards until taking on the Havelock camp.

He is another son of the district returned home – born in Havelock, he is the grandson of an old identity, land valuer Charlie Pickering.

The Pickering name is almost synonymous with the township. A memorial in the village’s main street commemorates the life of William Pickering, the man behind the 1957 launch of Explorer 1 from Cape Canaveral.

Born in Wellington but brought up by grandparents in Havelock, William Pickering was director of the US Jet Propulsion Laboratory, with a mind-blowing contract that effectively said “go out and explore the depths of the solar system”. In March 1963, his huge contribution to space exploration was recognised when he was pictured on the cover of Time magazine.

Neville says the famous engineer was a member of a very extended family. Neville’s own father was one of 15 children, 13 of them boys, so as the years went by it’s been even harder to keep track of all the relatives.

The other famous scientist whose association with Havelock is recorded by the memorial is Sir Ernest Rutherford, the creator of atomic physics and the forerunner of the nuclear age. He was awarded the Nobel Prize in Chemistry in 1908.

While the Rutherfords lived in Havelock, where Ernest’s father was a flaxmiller, the close-knit family experienced tragedy there from the death of three of Ernest’s brothers, two drowned in a childhood accident, and the other dying in infancy.

Today, it is mainly family groups that flock to the Havelock Motor Camp for their holidays, but there are also numerous one-night stopovers by people en route from Blenheim to Nelson, both Kiwi holidaymakers and overseas campervanners. 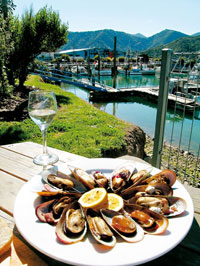 Neville says it’s amazing how many tourists are drawn to Havelock, the Greenshell Mussel Capital of the World, by the prospect of a tasty meal of green-lipped mussels. The Havelock marina is a base for mussel barges harvesting the shellfish for local factories, and local restaurants understandably capitalise on a local icon when preparing their menus.

In the camp itself, where there are 50 powered sites and about the same number of tent sites all very close to the marina, the crowds that descend in summertime sometimes extend into the adjacent sports ground.

Proximity to the community tennis courts, bowling club and skate park are other advantages for families, and Neville says their pet-friendly policy is a winner.

“We’ve seen some very unusual pets here, as well as some great people. The camp offers us a wonderful laid-back lifestyle, and since being here we have already made some friends for life, with people who are really genuine in everything they do.”

A few long-term residents, working in local forestry, the fishing industry and vineyards, are also good for security, and help by spending in the community, Neville says.

As he moves around the camp each morning, his dog Buck will often sniff out the best breakfasts cooked by some of the people with boats.

“That means we don’t have to go fishing, because generally our campers will keep us supplied with cod and snapper.”

But visiting Havelock without a boat does not mean you can’t enjoy getting out into the waters of Pelorus Sound. The experience on board the Pelorus Express, as it plies the sound delivering mail and supplies to far-flung homesteads, offers one of the best ways to see into the everyday life of the people who live their lives around a spectacular shoreline.

If you are a keen fishermen left high and dry without a vessel, you can also take a Sounds fishing charter from Havelock, catching trophy fish or just enjoying a leisurely cruise as others do the angling.

Havelock was home in its early days to gold-miners, farmers, fishermen, whalers and sawmillers. Quaint colonial buildings remain in the township, many of them snapped up as holiday homes. In the wider district, there are also many visible traces of the past.

Driving west from Havelock towards Nelson, travellers will pass through Canvastown, a historic settlement that began as a tent city in the 1864 Wakamarina gold rush. Further on is the picturesque Pelorus Bridge Scenic Reserve, where there is a wide range of glorious bush walks to choose from. Each year in October, the Department of Conservation opens up its campgrounds there, offering tent and power sites and a great opportunity to cast in the Pelorus River for its famed trout.

And for those wanting a real “get away from it all” nature experience, Havelock also makes an excellent launch point for a trip through from the Rai Valley to French Pass and D’Urville Island, the remote northern most point of the South Island first charted by Abel Tasman in 1642.