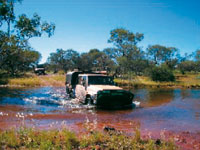 Aucklander Will Verryt goes bush and finds a land of contrasts in the Western Australian outback.

We hit the road early, having connected with the other vehicles in our tour party just outside Geraldton, Western Australia.

After months of planning and shopping, stowing of gear and spares for every contingency, we were finally underway on our 4×4 excursion into the Carnarvon Ranges – not to be confused with the Carnarvon ranges

Queensland. I had arrived two days earlier from Auckland, New Zealand, invited by my younger brother, Rob, to share with him his first trek into the interior. He’s only been living there for 30 years after all.

He was proficient in the use of the four-wheel driving technique as he, like everyone in WA, has at least one 4×4 in the garage. He is an avid fisherman, but he doesn’t walk – he drives to his fishing spots.

Heading inland, the highway to Meekatharra passed through rolling wheat country awaiting a rain so this year’s planting could commence. This gave way to mile after mile of flat scrub country.

Being from the hills of Auckland’s North Shore, I had to get used to the big sky view. Then we were into mining country where every hill was a slurry dump from the gold or iron mines.

Towards Meekatharra, we started to see what they meant by, “the most rain for 60 years”. There was standing water for miles and miles. This was Lake Anneen country.

Our overnight camp saw us just off the highway past Meekatharra on a flat patch of bare red gravel in the scrub. We had a roaring fire going within minutes and the billy on. From then on, all our cooking would be done on the open fire. Magic.

Waking up to a glorious sunrise the next day, we would go off road. Not much wildlife so far, although we spotted two beautiful wild horses broad siding through the scrub and away into the bush in a shower of divots.

Travelling eastward, we were off the seal taking the back road to Wiluna, and onto Ned’s Creek, a one million-acre cattle station with three thousand head. We had glimpses of dingos, camels and kangaroos but no good sightings. Asking directions from Lionel, the Station boss, we headed into the great emptiness, which consisted of mostly flat ground with mulga and other scrub dotted about, thickly or sparsely.

The windmills were our navigation points in the absence of features and each was numbered, mapped and had a GPS reference.

Then we hit the wet spot, after entering a large area of mulga flats with spinifex grass which, while seeming firm, was actually a crusted over wetland. One by one we dug in and had to be extricated. This was just part of the 4×4 experience and we managed to coax every vehicle but one onto the hard. The last one was buried up to the floorboards in the bog. We dug and snap strapped it to no avail until the late afternoon, and then left it there until the morning. 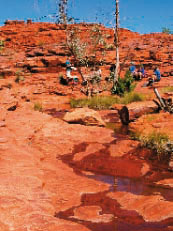 Meanwhile, another couple that had been following our tracks, found our sticking points the hard way but as they were lightweight, we had them out in no time.

We all settled down for the night on a dry island. It had been a hot and dirty day and Rob and I used some of our precious water to get clean again. We were too tired to cook. We had lost a day but it had been exciting, physical and educational, so it was not wasted.

The next day after hauling out the bogged vehicle using airbags and logs, we carefully made our way back to Ned’s Creek Homestead to seek an alternative route to the Carnarvons. Lionel showed us a way around and we set off again, thankful to be able to continue with our original plan. About three hours out, we found another wet strip of track and our vehicle, the second in line had to negotiate where number one had been.

We “extreme” fishtailed for 100m, threatening the only fence line we had seen just as Lionel roared overhead in his Cessna. The RT was full of comments like “My fence, my fence!” The other vehicles decided to take a different way round.

We crossed a number of waterways and wide plains. “Isn’t it green?” they kept saying. I didn’t think so.

Eventually we arrived at Serpent Glen, named for its rock paintings of snakes, and where a striking tree filled red rock rimmed valley in the Carnarvon Range.

This was to be our base camp from which to explore north and south. Once again, the fire was going and billy on. We made camp, dined, sang a few songs and turned in. Tomorrow was to be a rest day.

A leisurely morning was spent settling in and making the camp comfortable with awnings and furniture, collecting firewood and wandering round the valley. I kept a very cautious eye out for the snakes purported to abound in the area. Not a sign of one but I managed to get a photo of a big lizard.

From the top of crumbling cliffs we could scan far into the distance where burnt yellow gave way to blue. We collected brown water from a slowly trickling stream up in the ravine, so we could at least pretend to be clean, but when our beloved leader found a large waterhole high up in the cliffs, we were there like a shot, soaking in the clear blue water until the sun started to set.

It was great to sit around the campfire in the evening watching the sun turn the cliffs to blazing red before it went dark and the night sky put on it’s own show for us.

Our first exploration day took us north of base camp following the range to Talbot Springs. Our first close-up of a wild camel was one that refused to give us the right of way and ran in front of the lead vehicle for kilometres before disappearing into the brush, just as we aimed our cameras.

Overnight the weather had cooled considerably and although I was still hot, the Aussies were feeling the cold wind coming off the desert, pushed down by the cyclone battering the north. Arriving at Talbots Pool mid-morning, it was too cold to tempt us in, so we pushed on up the cliffs to a warmer prospect called Virgin’s Pool. It wasn’t as big as the Talbot pool, which was at plains level and dug out by it’s own waterfall, but more of a wide crack in the hard rock, so in we went.

The day was still cold so it was warmer to stay in than step out, as we were exposed on the side of the cliff, but it was pleasant to sit in our pool and survey the panorama below. After studying more rock paintings, we made our way uneventfully back to base camp through miles of skeleton trees.

The ancient rhythm of the place was kicking in. We conducted a damper baking competition, relaxed and went to bed with a Slim Dusty CD on replay in one of the other vehicles, which eventually drove me nuts. 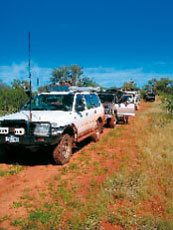 Today’s plan was to find and explore M6, a trig point to the south. The temperature was still down with a cold wind coming off the Sandy Desert to the east. It was too cold for the Aussies.

We explored some valleys on the way south with little result until spotting the cairn on top of the north wall of a valley. It was the highest point for miles so it had to be climbed. A steep assent over crumbly and shifting rocks with many signs of wildlife brought us to a narrow ravine below the cairn. We coaxed each other through and up, and broke out on the best 360-degree panorama of the expedition. One could see until the eyes said, “That’s far enough.” We stayed up there for a long time before descending for lunch.

We thought we had experienced the “high” point of the day, but when Rob and I decided to wander upstream a way, we stumbled upon the best two rock pools of the trip, 30-foot across and 9-foot deep. By then, we were so hot and dusty from our assent to M3 that we welcomed the opportunity to once again plunge into a cool pool of clean clear water.

We had to coax the Aussies in, but they weren’t too reluctant. Lying about in that pool, the contrast between green valley, red cliffs and dry plains beyond, conveyed to me all the magic of this different land.

The day still being cooler, we remained refreshed as we drove back into camp for our final night there. I was doing a slow cook stew so when Slim Dusty came back on to shatter the ancient peace; I took my notebook and walked out around the valley wall to soak up the last sunset before the two-day trek back out.

I was sketching a typical desert scene when to my delight, a ‘roo hopped into the frame. Not having seen a good sighting the whole time we were there, I just sat and watched him, watching me from 50 feet away, until he got bored and carried on, leaping with ease up the cliffs. We ate, packed and absorbed the last evening of tranquillity in that place.

We farewelled a beautiful haven on a cold morning and hit the trail for Ned’s again. The whole range of wildlife came out to say goodbye so what would have been an uneventful mileage covering drive turned out to fill in all the gaps of the trip.

Kangaroos, camels, dingos, and emus showed themselves and told me that this was indeed Australia. Pausing again at Ned’s Creek, each vehicle expressed their appreciation of the outback hospitality with a donation towards the cost of the plane’s fuel, before heading out towards our overnight camp.

A full day’s drive again and a sleep under the stars on a cold night, left us pointed towards Geraldton on our last day out. As we headed towards the coast, the day became hotter again while the RT kept us entertained. A group of strangers had become a team willing to tackle anything in their path.