Siem Reap is home to world renowned Angkor temples. Some temples have stood for more than 1000 years and at just an hour’s flight from Bangkok, Tim Lamb is among the travellers finding the solid ruins are now more accessible than ever. 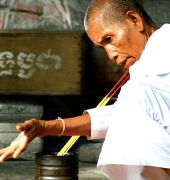 Angkor Wat is most humbling pre-dawn. Hundreds of tourists, some with more cameras than hands, line the main gate of Cambodia’s famous Hindu-cum-Buddhist temple anticipating a rose and violet sunrise. But I’m not one of them.

Instead, my wife and I stand on the temple’s second level indulging in something nowadays rare to find at Angkor Wat – solitude. For an hour until the masses capture their obligatory panoramic photo of the temple at sunrise, I’m king of this castle. The only competition are the bats flapping and spitting in the towers.

The ambient moon dawdles towards the horizon and within the hour the rising sun paints variations of gold on the towers. Daylight heralds the arrival of some of the one million visitors that will pass through the gates this year.

Angkor Wat is perhaps the most famous of the 300 temples on the fringe of Cambodia’s second largest city, Siem Reap. Despite hosting a tourist attraction arguably 1200 years in the making (as the first temple was constructed in 800 A.D.) it has only been in the last decade that Cambodia has fully opened its doors. A brutal civil war kept most tourists at bay during the 1970s and 1980s, but now Cambodia is seen as a core stopover when visiting established neighbours Vietnam and Thailand.

Siem Reap now caters to travellers of all varieties with accommodation options ranging from simple hostels to fivestar bliss. Arguably some of the recent fame can be attributed to the ‘Jolie’ factor. US-blockbuster film Tomb Raider, starring Angelina Jolie, was partially shot utilising the Angkor temples as backdrops. Since then, Jolie and Cambodia have been publicly linked through adoption, charity and she is even rumoured to have stayed at Amansara in 2007.

Because the temples span more than 400km the best way to get around as an independent traveller is by remork; Cambodia’s version of a tuk tuk. With a driver and guide you can conquer the largest temple Angkor Thom, get to the roots of Ta Prohm and head off the beaten track to the scores of temples that novices won’t dare visit.

However, venturing beyond the temples will also lead to some rewarding encounters. One can discover some of the kindest people with cavernous smiles that hide the reality of living in one of Asia’s poorest provinces. One suggestion is to take a boat trip on Tonle Sap Lake to visit the floating village, where houses on stilts rise and fall with Cambodia’s rainfall extremities.

Wherever your adventures lead you, don’t bypass the chance to try local food at Siem Reap’s well respected restaurants. With dishes from NZ$6-10, the Sugar Palm Café is an ideal place to dip your toes in the water of Khmer food, while washing it back with a glass of Cloudy Bay, Villa Maria or Sileni. Kiwis Bruce and Kethana Dunnet originally opened Sugar Palm in the Cambodian capital Phnom Penh before launching the sequel in Siem Reap two years ago. Set in a traditional house on stilts, barefoot servers in Khmer regalia add authenticity to the restaurant frequented by local hotel management and tourists alike.

For a city with such early morning starts, Siem Reap also has a reputation for post-dinner nightlife. The aptly-named Pub St is the starting point for a burgeoning collection of restaurants and bars. One of the trendiest joints, Miss Wong, is run by New Zealander Dean Williams. The former radio journalist serves up reputable cocktails among a chic Shanghai setting.

A few blocks away the night market offers souvenirs to savour Siem Reap – all without the over-zealous hagglers that might come with markets in other countries. In many ways Siem Reap’s market sums up the Cambodia experience – courteous and welcoming people among a showcase of inspiring artefacts.