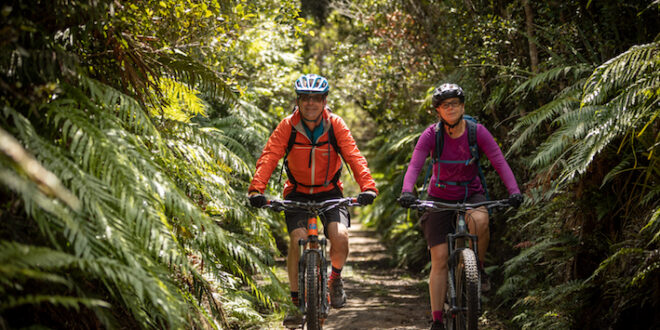 Ruapehu’s best biking adventures can be found on the region’s two Great Rides – the Timber Trail and Mountains to Sea – Ngā Ara Tūhono. Both offer a range of day rides as well as multi-day journeys staying in atmospheric accommodation along the way. 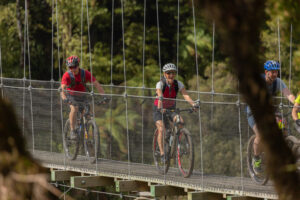 Following the path of old logging roads, bush tramlines and easygoing singletrack, the Timber Trail explores the natural and human sides of Pureora Forest. Highlights include mighty trees, native birdlife, spectacular suspension bridges and fascinating timber-milling relics, all of which and more are explained in a series of informative storyboards.

One of New Zealand’s most loved Great Rides, the 84km trail is commonly ridden over two days with memorable accommodation available at Piropiro, the midway point. There are two lodges, a campsite, and fully serviced glamping here, nestled into a remote bush setting. A top option for intermediate mountain bikers and ebikers, the Timber Trail is also an excellent option for groups thanks to local operators offering bike (and ebike) hire, shuttles and all-inclusive tour packages. 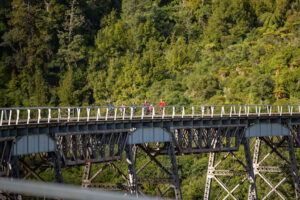 The most popular day ride on the multiday Mountains to Sea Cycle Trail, the Ohakune Old Coach Road follows the route of the old dray road between Ohakune and Horopito. Full of surprises and incredibly beautiful, the 15km trail skirts Tongariro National Park forest and vibrant and regenerating native bush, and takes in some magnificent railway heritage including two striking viaducts and a spooky old tunnel. It also offers some fantastic views over the volcanic plateau.

The Ohakune Old Coach Road’s slight incline makes it best completed as a one-way journey from Horopito to Ohakune, made easy with local shuttle drop-offs. Or simply ride it return from Ohakune allowing 2–3 hours in each direction, or just ride as far as you fancy and back again. 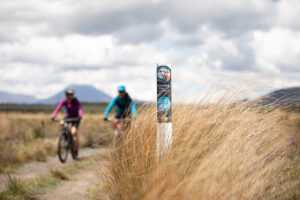 Another section of the Mountains to Sea, the Marton Sash and Door is a really neat, two-hour (18km) ride along the railway and along a bushy ridge behind National Park Village. A return ride with a wee loop in it, it starts at the historic railway station and offers open views around the volcanic plateau before climbing briefly to reach the ridge across which a logging tramway was built around one hundred years ago. (The trail is named after the logging company that built it.)

There’s lots to see on the ride including all sorts of native flora, and various tramway relics including sleepers, irons, pumice cuttings and the remains of an old log dam. Interpretation panels share the stories of this long-forgotten history, now coming back to light alongside the even longer connection with mana whenua, the people of Uenuku iwi. 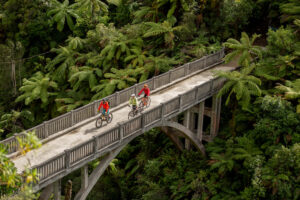 Another trail in the Mountains to Sea network and often referred to as the Bridge to Nowhere track, the Mangapurua is an unforgettable day ride best suited to experienced mountain bikers and ebikers with decent off-road skills. From the trailhead deep in the rural Ruatiti Valley, the trail climbs over a saddle and into the remote Mangapurua Valley, a long-abandoned farming settlement surrounded by bush-clad hills and dramatic bluffs.

The ride and the riveting story that goes along with it end at the Bridge to Nowhere, a graceful concrete monument to the settlers’ broken dreams. Nearby is the jet boat pick-up point for the thrilling trip down the Whanganui River to Pipiriki, an invigorating way to end a truly classic mountain bike adventure. Transport logistics are easy to sort thanks to local tour operators who package shuttle transport, the jetboat ride and full ride briefing. 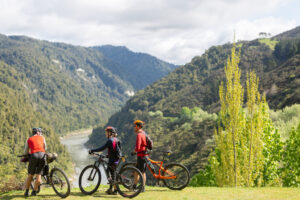 Following the Whanganui River as it flows towards the sea, this peaceful rural ride blends sublime scenery with a series of Māori and Pākehā heritage sites. Highlights include beautiful marae, the pretty St Joseph’s church and convent, and the historic Kawana flour mill, along with elevated views over the river and surrounding hill country.

Starting at Pipiriki and finishing at Upokongaro (12km upriver from Whanganui city), this section of the Mountains to Sea Cycle Trail is 65km long and gently undulating. It can be ridden in a day or split into two days by stopping overnight in characterful, trailside accommodation. 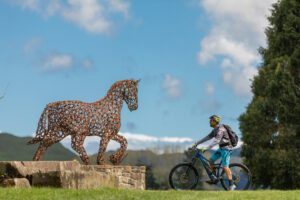 Starting at National Park Village, this fairly easy, mostly downhill bike ride takes you through pretty countryside via a rural road originally formed in 1896 to allow access to the remote Retaruke and Kaitieke Valleys. Now set aside for recreation and part of the Mountains to Sea network, the track descends for 660 exhilarating metres and takes around 2–3 hours.

Features of Fishers Track include fantastic views of Ruapehu’s mountains, an optional side trip to Tupapakurua Falls, and the unusual horseshoe monument at Kaitieke where the trail ends. This is the pick-up point for prearranged shuttle transport back to National Park Village.

The thrilling first section of the full Mountains to Sea Cycle Trail, Ohakune Mountain Road dishes up 1000m of freewheel descent from Tūroa skifield down to Ohakune village. As well as the fun of the run, which will take up to an hour depending on your need for speed, this ride also sports spectacular, jaw-dropping views across the volcanic plateau. There are also plenty of places to pull over and check out the weird and wonderful landscape of World Heritage-listed Tongariro National Park, including the 90-minute-return walk to Waitonga Falls.

Fit riders may wish to ride both ways. Mere mortals will need to catch a lift up with friends or local shuttle operators.

PLAN YOUR TRIP at www.visitruapehu.com or visit the i-SITE Visitor Information Centres in Ohakune, and Whakapapa where you can also collect maps for all these rides and more. You can also download ride maps from the official websites, Timber Trail and Mountains to Sea.

How to Care for Your Pet’s Teeth 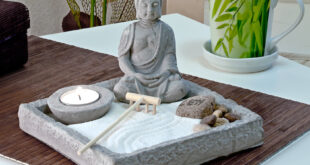 Who said gardening had to stop with winter – make this your best indoor gardening year ever!