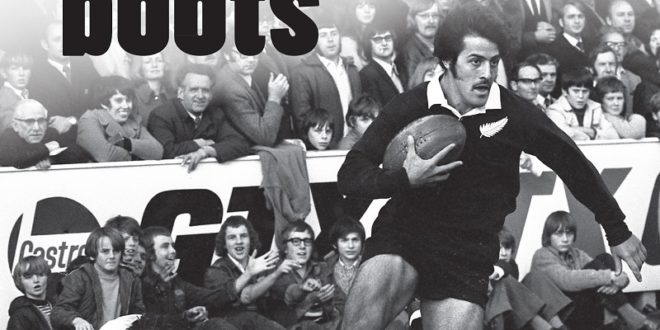 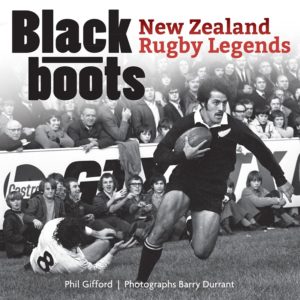 Black Boots, New Zealand Rugby Legends is bound to be an enjoyable walk down memory lane for rugby fanatic Baby Boomers (of whom my partner John is one). He has very fond memories of coming up from Massey University with his classmates to see some of the All Black games at Rugby Park in the sixties. You could not book seats in those days so they would line up at 6 am in the morning, get in by about 9 am and be entertained by a few curtain raisers before the game started at 3 pm.

It is a handsome coffee table book about a classic era of NZ rugby. Inside are 150 black and white photographs mainly from the fifties, sixties and seventies taken by Barry Durrant, the chief photographer from the Dominion Times. They were chosen with the help of former All Black Captain Andy Leslie. The engaging and entertaining captions are by renowned rugby writer Phil Gifford.

The photographs come from an era that largely pre-dates the television age, and so are the only real record of what happened in the games, both the highs and the lows. One feature that immediately stands out is that rugby ground drainage and turf culture was not what it is today, with many players covered in mud from the grounds.

The muddiest of all playing fields was the now defunct Rugby Park in Whangarei where in 1961 All Black great Don Clark slipped and fell flat on his back trying to kick a goal in the mud.

Those were the days when All Blacks were amateurs who didn’t get paid so they had to hold down their ordinary jobs. Fitting training in could be quite a mission!

‘All Black wing Ron Jarden spent 90 minutes every morning for two years push-biking to a Wellington park where he’d put a jersey in the middle of the ground and practice kicking the ball onto it. Then he’d go to his lectures at University.’

The All Blacks were a staunch bunch! There is an anecdote about Colin ‘Pinetree ‘Meads who played 15 seasons for the All Blacks. When his arm was broken in South Africa he rubbed horse liniment on it, strapped on a leather cover, and played the last two tests of the tour.

Graham Short, a young man with no medical training, is pictured tending to an injured Andy Haden during the All Blacks versus Glasgow and Edinburgh match in 1973. It was not until 1978 that a physiotherapist accompanied the All Blacks when they went overseas.

There is a memorable photograph of the first haka ever performed before a game on an All Blacks Tour at Iffley Road in Oxford (All Blacks vs Oxford University in 1963). But it wasn’t until the 1980’s under Wayne ‘Buck” Shelford that it became such a stirring, dynamic performance.

Huge crowds used to attend the All Blacks games. Rugby-loving Baby Boomers may well find their own face amongst the photograph of some of the 50,000 people pouring out of Athletic Park after the second test of the 1956 Springbok tour of New Zealand.

Or they might well have been one of the fifty thousand spectators (more than a third of the city’s population) who poured out of Athletic Park, after watching the second test of the 1956 series with the Springboks, to catch a tram.

I gave John, who is housebound for quite a few weeks after a spectacular fall while out volunteer guiding this book to read. His verdict:

“This book is a good book to leave lying around, as it can be read in small chunks.”

We think it would make a great present for those who love Rugby and who for one reason or another can’t get out and about for a while and need an entertaining book they can dip into.