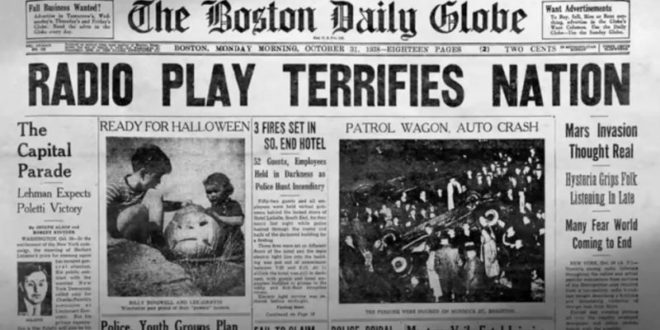 Entertainment
The date was October 30, 1938 and the event was Orson Welles’s radio adaptation of HG Wells’s War of the Worlds.
The 23-year-old wunderkind director, left, presented the story as an uninterrupted series of news bulletins, beginning with reports of explosions on Mars and something “moving towards the Earth with enormous velocity…” Within an hour the aliens had landed and begun their conquest of Earth.
Today, it is unlikely anyone would fall for such a prank, which Welles later dismissed as “a Halloween concoction, the equivalent of dressing up in a sheet, jumping out of a bush and saying ‘Boo!'” But in a largely rural America, when radio itself was a novelty and space travel unknown…? Newspapers the following day were full of tales of panic, people fleeing and even attempting suicide, or arming to face the alien foe. But were these alarming tales true, or just sensationalist stories to sell papers? Marking the 75th anniversary of the original broadcast, War of the Worlds picks fact from fiction and examines the story, the stars and the circumstances that conspired to bring about the greatest Halloween trick of all.
Like this article? Share & Connect Now!
Advertisement