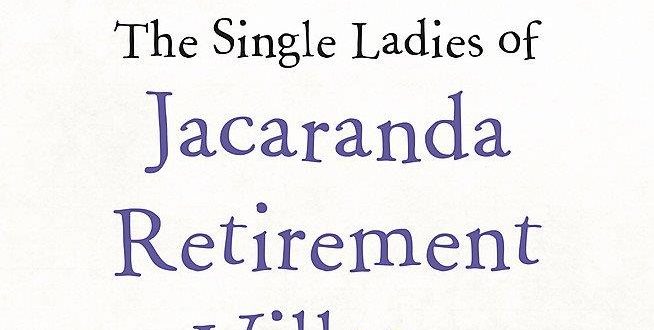 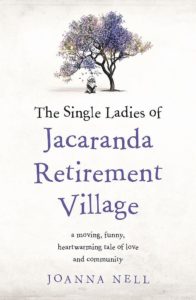 Seventy-nine-year-old Peggy’s life at the Jacaranda Retirement Village was as drab as her wardrobe. But she did rather fancy Brian, a handsome widower who was the Treasurer of the Residents Committee and still had all his own teeth. A wave and a smile from him as he walked past her window raised her hopes fleetingly. But Peggy thought her chances of seducing him with one of her sticky date puddings were negligible as women become invisible to men at a certain age, even to men in their eighties. She turned to the sugar bowl for consolation, swirling another spoonful of comfort into her tea.

So begins the story of The Single Ladies of Jacaranda Retirement Village a witty Seniors rom-com by Joanna Nell filled with tears and laughter.

Fortuitously Peggy’s glamorous old school friend Angie Valentine, a fashionista and international jet setter, takes up residence at the Jacaranda Retirement Village.  Angie may have a pacemaker but that does not stop her from living life to the full and wanting to party. She makes it her mission to show Peggy the way to age disgracefully.

Peggy agrees that she let herself go after Ted’s death. But four years have passed now and she is ready for a makeover. So Angie takes her on a shopping spree and shouts her a whole new wardrobe starting with the foundations. It dramatically changes Peggy’s appearance from a sad and boring to a much more attractive and rather striking old lady.

Angie insists she can well afford it as husband number four had left her a great deal of money (at least he was good for something). But there is another reason for her generosity. A deep secret is eventually unearthed which will test Peggy’s tolerance greatly.

Angie soon gains a place on the Village Library and Social Committee that Brian is keen to help out with too. They set about planning much more fun activities than the dreary ones available for the residents.

Suddenly life becomes a lot more enjoyable for Peggy and new friendships blossom.  Even a relationship with Brian could be on the horizon although there is always the risk that one of the other ladies might snap him up first.

But life is not all beer and skittles when you are nearly eighty. Peggy must deal with insensitive children who don’t value her need for independence as much as she does. And Peggy and her friends struggle with some serious health issues, not surprising considering their advanced age.

The Single Ladies of Jacaranda Retirement Village was written by an Australian doctor and was inspired by her interactions with her elderly patients. She has a lot of empathy for them and greatly admires their courage but does not sugar-coat the way they have to battle with their health problems.

Peggy’s journey of self-discovery is at the heart of this story but it is Angie whose character I most admired as feisty attractive old women like her are as scarce as hen’s teeth in literature.

I found it refreshing too to read a story about old people which is not just full of doom and gloom and written with a light touch.

The Single Ladies of Jacaranda Retirement Village is a welcome reminder for those of us for whom the end of the journey is closer than the beginning that life doesn’t have to stop at eighty. People can still grow and develop, form new relationships, and have fun.

Previous Article Video: How modern photography affects our brains
Next Article Joke: Why don’t you do that?