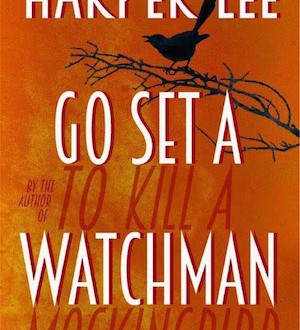 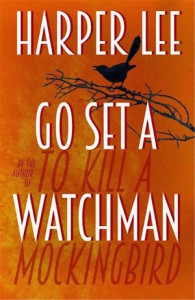 Was 88 year old Harper Lee who now lives in an assisted care facility after suffering a stroke, really keen to see Go Set A Watchman published? Or did her lawyer Lee Carter talk her into it when she discovered the manuscript in a safe deposit box? We may never know the answer.

But considering the shock and moral outrage with which Go Set A Watchman has been greeted by many I think it would have been kinder to wait until she had passed away before letting it go out into the world.
Still what is done is done. It is out now and will no doubt become a book club favourite. Over a million copies were sold in its first week.

I took Go Set A Watchman with me for a plane read on the way to Sydney last week. Forewarned by the negative reviews I felt somewhat diffident about it. But I was soon immersed in the story and found it a good read.

The protagonist, feisty 26 yr. old Jean-Louise Finch returns home from New York to visit her ageing father Atticus, a retired lawyer , now riddled with rheumatoid arthritis. She is gutted to find that the man she had idolised in her childhood for his courageous defence of a young black man accused of raping a poor white woman has turned into a racist and a staunch segregationist.

Jean-Louise Finch is seriously considering marrying her boyfriend Henry Clinton who Atticus is grooming to take over his law practice. Her aunt thinks him unsuitable as he comes from a poor background. But this is not what is holding Jean-Louise back. Marrying him and raising their children in this small minded conservative town could be far too restrictive after her independent life in New York.
The flashbacks to her childhood, although appealing in themselves, fit uneasily into the narrative. And Jean-Louise does become rather hysterical and preachy at times although that is understandable as she feels her world has been turned upside down.

But the pictures she paints of the citizens of Maycomb are perceptive and laced with a dry humour.
Go Set A Watchman reads like the sequel of To Kill A Mockingbird as it is set 20 years later. But it was an earlier manuscript and Lee Harper’s first attempt at a novel. A publisher rejected it as unsuitable but impressed by her talent asked her to rewrite the story focussing on her childhood. The result, To Kill A Mockingbird became a huge success. Forty million copies were sold and it won a Pulitzer Prize.
I had never read To Kill a Mockingbird but I was keen to do so now. That weekend while in Sydney I went to Gertrude and Alice, a quirky little bookshop/cafe in Bondi where they reputedly serve the best chai, freshly brewed and served with honey.

One of the staff obligingly climbed up a ladder and on the highest shelf found me their last second hand copy of To Kill a Mockingbird. It was an early edition with slightly yellowing pages. I found it to be a beautifully crafted tender story of two motherless children brought up by their solo father Atticus and a black nanny.

I could see why the brave Atticus in To Kill a Mockingbird became such an inspiring role model for many. But it was written from a child’s point of view. She adored her father and could see only the good in him.

In comparison the Atticus who appears in Go Set A Watchman is seen through the eyes of a grown up daughter who discovers some very unpalatable truths about her father.

Go Set A Watchman is a cautionary tale which shows how if you live a racist community it is easier to bend your own morals so as to fit in than to stand up for what you know to be right. This is what happened to Atticus.

Even Jean-Louise, who had grown up in this small town, did not escape from some of its values, although she would like to think so. She admits she would never marry a black man.

The citizens of Maycomb could not have imagined in their wildest dreams that a day would come when Americans would vote in a black President. But unfortunately racism still continues to rear its ugly head as shown by the recent killing of nine black church members in Charleston and several incidents in which unarmed black men were killed by police officers.

After these events, when he was asked about race relations in America today President Obama made some sobering comments, ‘I always tell young people in particular: “Do not say that nothing has changed when it comes to race in America-unless you’ve lived through being a black man in the 1950’s or 60’s or 70’s. It is incontrovertible that race relations have improved significantly during my lifetime and yours, and that opportunities have opened up, and that attitudes have changed. That is a fact.

What is also true is that the legacy of slavery, Jim Crow, discrimination in almost every institution of our lives – you know, that casts a long shadow. And that’s still part of our DNA that’s passed on. We’re not cured of it yet. ‘

To understand race relations in America today you need to know about its history. Go Set A Watchman will never be a great inspirational novel like To Kill A Mockingbird but it does give some insight into racial politics in the 1950’s and how the citizens in a small Southern town in Alabama reacted to them.