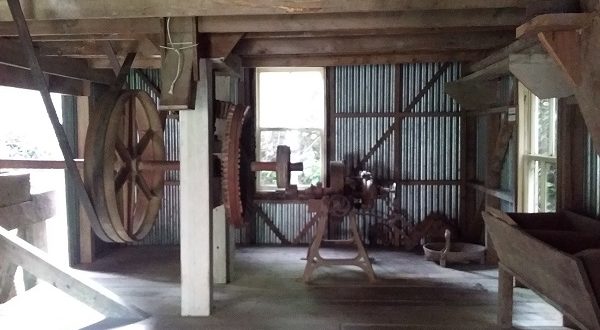 The milling of flour was an alien culture to Māori when it first arrived in Aotearoa. Introduced first in the form of hand operated mills, it immediately attracted the attention of Māori who, already being experienced gardeners, soon began growing wheat. Northern Māori chief Ruatara was the first to grow wheat, harvesting the crop in 1813, and shortly after learning to grind it in a hand-operated mill which he sourced from early missionary Samuel Marsden.

Less than 20 years later, the first automated flour mill, built by missionaries, was operating in Waimate – and Māori, who were increasingly growing and harvesting their own grain, were keen to have the same.

While the Whanganui River today is considered one of the more isolated parts of the country, Māori living there in the mid 1840s were visionary in terms of milling, and in understanding just how the power of their mighty river could be harnessed to produce flour.

The Kawana Mill was one of the first Māori-operated flour mills on the Whanganui River. It was built in response to a request by the Poutama people of Karatia, but not without super-human feats of timber-recovery. Huge tōtara  logs, lying underwater in the river had first to be salvaged for building purposes. It took 100 Māori, hauling on ropes, along with dozens of others who dived down into the water to push on the logs, to bring the submerged trees to the surface.

A fleet of 32 canoes journeyed down stream to Whanganui to collect the machinery for the mill, with the wheel component of the mill being lashed to the prow of two canoes for the return journey back up river.

No time to lose

Millwright Peter McWilliam was engaged to assemble the mill, but the local Māori, eager for the task to be finished, were less than impressed with the speed the job was taking, and challenged the Reverend Richard Taylor who, in present day terms, we might refer to as the ‘project manager’ to ‘speed things up’.

The two-storied iron clad mill was eventually completed, and before long, Māori were growing up to 700 acres of wheat in the challenging terrain close to it. Kawana went on to be the longest operating flour mills on the Whanganui River.

To visit the Kawana Mill today is to step back into time in the best possible way. The low key restoration has preserved the tranquil site, and in a safety conscious era, it is a pleasure to be permitted to step inside the old mill building and climb to its second story where original machinery, including belts, cogs, wheels and elevators, are on display.

A few steps away from the mill is the quaint miller’s cottage once occupied by resident miller Richard Pestell. Although the building is locked, it is possible to peer through the windows to an authentic interior displaying the bedroom and kitchen furnishings and paraphernalia of a life lived in the New Zealand bush in the mid 1800s.

Although a journey up the Whanganui River is a significant undertaking, even though the road is sealed, a visit to Kawana Mill is highly recommended.

Previous Article Joke: The Value of Your Experience
Next Article VIDEO: Michael McIntyre prank – customer served her own food in a top restaurant