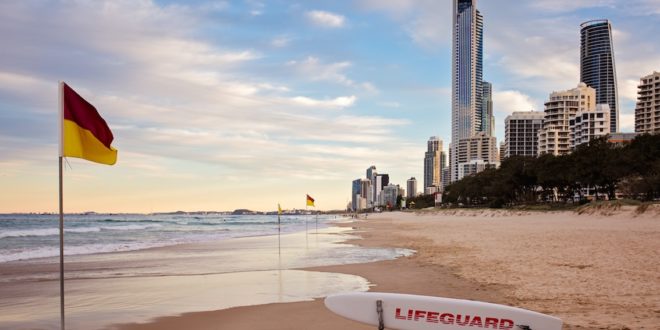 The Gold Coast in Queensland is all about the stunning white sand beaches. Stretching for 35 kilometres along the coast, with the sun glistening on the sea and the surf constantly rolling in. If you’re planning a trip to the Gold Coast once the Trans-Tasman bubble reopens, one of the experiences you must have on the top of your things-to-do list is enjoying a long leisurely breakfast, right on the beachfront at one of the iconic Gold Coast surf clubs.

There are about ten surf clubs that are situated right on the water’s edge, with great uninterrupted views out over the beach. You know you are on holiday when you are sitting on a deck in the sun wearing your T-shirt and shorts, watching the surf rolling in and tucking into your favourite breakfast. The Aussies are experts at cooking a superb and tasty breakfast. 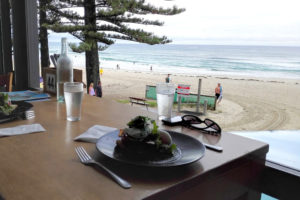 The Currumbin Beach Vikings Surf Club probably has the most sensational surf views. It has been built alongside Elephant Rock, and when the tide is in you can’t get any closer to the surf without getting your feet wet. The northern most on-the-beach surf club is

A little further down the coast is the Palm Beach SLSC and the popular Rainbow Bay SLSC near the world-famous surf breaks at Snapper Rocks and Duranbah.

Wherever you stay on the Gold Coast, there will be a local surf club right on the beachfront near you. You don’t need to be a member to make use of the club’s facilities, you just need to show a photo ID (such as a driving licence or passport) at reception. If you intend to make several visits during your stay, it’s well worth joining the club. A one year membership is usually only about $5, and often includes a discount off your meals, drinks and weekly specials. Your membership will also give you access to other Gold Coast surf clubs.

The day starts really early on the Gold Coast. Even at 5 am you will see many people out taking their morning exercise. The local council organises free or low cost yoga or Tai chi classes as part of their “Active and Healthy” programme. It’s fascinating to watch and it continues all morning. As an added bonus, in the whale watching season you might get to see some whales swimming by!

Most of the beachfront surf clubs are located on the Gold Coast Oceanway. This is a 36km network of pathways for walking or cycling that follows the coastline from The Spit in the north to Point Danger in the south.

After your big breakfast you might feel like some gentle exercise, so pick up a hire bike or just start walking in either direction, north or south, to explore the Oceanway. The paths are usually 3.5 to 5 meters wide so there is plenty of space for both walkers and bikers. Along the way you’ll find free exercise and gym equipment, viewing platforms with seating, toilets, drinking water stations, and plenty more awesome ocean views along the way. You can simply stroll or bike as far as you wish, then hop on the local Surfside buses back to where you started!