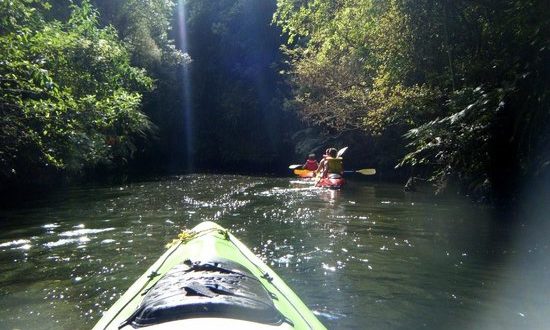 One of the essential differences between the sexes is that women remember their friends’ birthdays and celebrate them, while men forget unless they are unexpectedly shouted a beer on the day at which they grunt ‘Happy Birthday’ in an embarrassed way, and the birthday boy grunts back.  Thus it was that I found myself recently in the early evening beside a large hydro lake on the Waikato River with my dear wife (MDW) and her birthday celebrating friend (BCF).  Our daughter (OD) was also in attendance – just to laugh at the old people.

We were there to undertake a night kayaking expedition down the lake and river to see glow worms in a river canyon.  This was a birthday treat for BCF organised in great secrecy by MDW. Diagonally across the lake was the famous training area for New Zealand rowers and canoeists, who recently won many Olympic medals in Rio.  I can confirm that this proximity to such competence, dedication, and raw sporting ability had no effect on our party whatsoever. 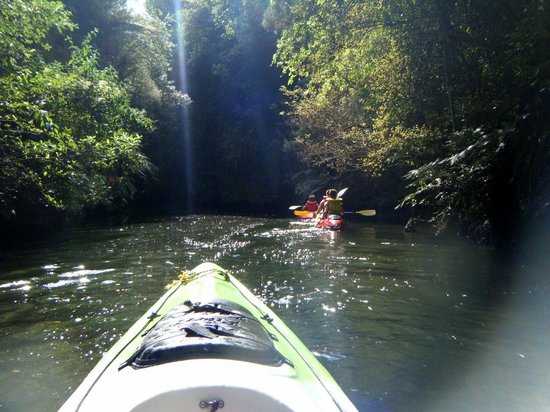 We had arrived wearing various layers of poly props and woollen clothing as the night was likely to be cold and we were likely to get wet.  At the adventure company office we were fitted out with wet shoes, over-trousers, waterproof jackets and bulky life jackets.  I looked like a modern day reincarnation of the ‘Michelin Man’ and moved about as well. After a briefing on how to paddle, and how to get in and out of a kayak without getting wet, we headed to the water’s edge. Bending over to get into a kayak from the bank with the boat at the same level as your shoes was very difficult and despite trying to follow instructions I ended up on my knees in an awkward position that took the combined strength of a couple of guides to sort out. We then paddled out in the lake and milled around while everyone else got into their kayaks – they were mainly double ones. It was not a nice evening as there was rain and wind coming across the lake.  After only a short passage of paddling I started to suffer from agonising lower back pains.  I found I could either only paddle while lying back almost horizontal to the water, or I had to sit upright bent forward to try and alleviate the pain.  I’m not one to complain so I said nothing and quietly stopped paddling.  Meanwhile MDW in the front paddled on gamely.  After some time she realised that she was doing all the work and complained loudly.

Before a major maritime domestic dispute erupted one the guides appeared in his single kayak and offered to tow us.  Oh, the ignominy of being towed!  Oh, the joy of being old enough not to care!  We went through the canyon and arrived at the halfway spot.  Our kayak was sent to the edge and a young guide was instructed to help us out.  MDW was helped out without too much trouble.  The young man approached me.  I advised him that it might be difficult but he didn’t seem to believe me.  ‘Take my hand,’ he said. I did as he said, and he gave a huge heave.  I 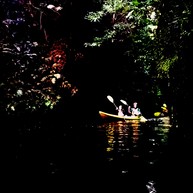 didn’t move at all but he came sliding down the riverbank and almost fell on top of the kayak.  Eventually, with the veins standing out on his forehead from the effort, he moved my 96 kilos from the kayak.  Sheltering in the trees from the rain we enjoyed a hot drink and waited for total darkness.  After a briefing we climbed back into our kayaks, this time off dry ground, and they were gently slid into the river. We spent a pleasant hour in the dark, slowly and quietly drifting with the current through the river canyon, enjoying the fairyland of light from the glow worms all around us in the trees.

When we exited the canyon near the start of the lake it was still raining heavily.  The guides had received reports of white caps and strong winds on the lake.  They decided that we should abort our mission by a road bridge.  It was a wise decision as looking after twenty novice kayakers at night on a stormy lake was hardly sensible.  We were ordered to paddle into the left bank.  There were about six kayaks ahead of us lined up in an orderly queue.  Unfortunately, MDW and I overshot the queue and when we came round again found ourselves unexpectedly at the head of the queue.

Notwithstanding our flagrant queue jumping, the guides evidently decided the sooner they got this mad geriatric man off the river, the better it would be for all.  I was helped out of the kayak and directed to climb up to the road to the waiting mini-bus.  The road was some 30 or 40 metres above us at the end of a steep sandy slide.  By this time my undergarments were wet and with the bulky waterproofs I felt like I was wearing the proverbial concrete gumboots.  I slipped and slid my way up the hill grabbing handfuls of grass and shrubs to stay upright.  At the top was a half metre step which I could only navigate on my hands and knees.  A lady helped me to my feet – several times.  I was directed to climb aboard the mini-van.  MDW was ahead of me having trouble with the high step, her ankle was playing up, (at the time she was waiting for the results of an X-ray to see if she had a broken bone from a fall a couple of weeks earlier), but such a small and inconsequential thing as a broken ankle would never stop her doing anything she wanted to do.  I lurched up behind and grabbed her buttocks with both hands and assisted her into the van (it was a Donald Trump moment).  I wearily followed her into the van successfully dodging her swinging backhander.

Back at base we divested ourselves of the company clothing and enjoyed a hot drink.  BCF had also had back problems and she and I conspired to make sure the next birthday outing was less strenuous.  However, even over seventy years of age one should challenge one’s self occasionally – and what is a bit of agonising pain between friends?

Special thanks are due to Lake District Adventures at Horahora for their well-organised, professional and friendly and patient guides.