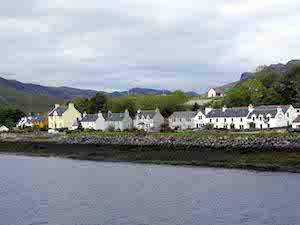 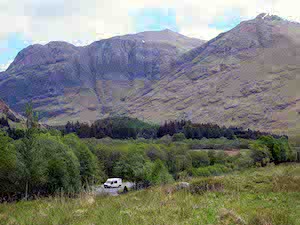 As we travelled through the remote Scottish Highlands, famed for their dramatic mountains, blue lakes and rugged coastlines there were times when the landscape looked remarkably similar to the more remote parts of the South Island.

There were plenty of opportunities to put on our hiking boots and go on some great walks which, in deference to our age, were not too challenging. 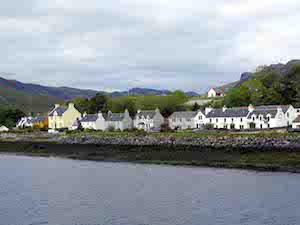 The place that most captured our hearts on this journey was Dornie, a small picturesque village in the Ross Shire Highlands of Scotland, about 10K from the bridge to Skye.

Our apartment there was in the lower part of a large Victorian House looking out on the shore, two doors away from the store and two minutes walk from the two village pubs. Because it was just off the main road, it was very quiet.

The Eilean Donan castle which attracts many tourists was just a short walk away. It was floodlit at night, although because of the long summer days it was about 10.30 at night before the lights came on.

Our delightful landlady, who looked well into her seventies, was upper class English and a real character. She lived in the upper part of the house but was very unobtrusive and full of useful advice on the best places to see and eat.

“Kick up your heels and party if you wish,” she assured us because she wouldn’t be able to hear us at all.

Our apartment was furnished with numerous antiques and old paintings. One was of a stately home which was one of three the family had owned until they apparently lost them through a combination of death duties and gambling. Another was a horse painting which had to be restored after some fellow put a bullet in it 200 years ago because the horse’s eye was putting him off his billiards!

Skye is a huge island so we only explored, at our landlady’s suggestion, part of the southern peninsula. Once we were off the main road the narrow roads were single-laned with passing places every 100 metres or so. The system works well here but in NZ we could imagine the road rage potential with drivers fighting over who had to stop first! 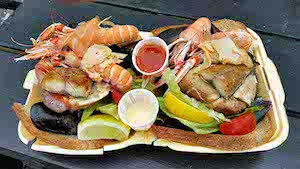 We stopped at The Oyster Shed and feasted on fresh local seafood: platters of prawns, crab, salmon, scallops and mussels. We’d eaten only seafood since arriving in Scotland and it had been wonderful, tasty and fresh, and much cheaper than in New Zealand.

By late afternoon the fine cool weather was perfect for a walk along the beach. The colder temperatures have kept the midges away of which there are many tales. It seems they can rival those in Fiordland.

In a shop window we’d seen a small poster advertising a concert of traditional Scottish music in Kyle by teenagers from the Plockton High’s Music school which attracts students from all over Scotland. We had a great night out hearing these talented young people playing fiddles. harps, pipes and accordions and singing. The concert was finished by 10 pm so there was still time for our daily pint at the pub before retiring.

From Dornie we drove to Ullapool along hilly roads stopping off to picnic at Inverewe, reputedly Scotland’s loveliest garden. This was gifted to the National Trust by Oswald McKenzie who developed it over a century ago. Only plants which could tolerate the salty sprays hurled across the garden by frequent wintry gales could survive there. Many were imported from New Zealand and we discovered flax and other NZ natives still flourishing here.

We arrived in Ullapool in the late afternoon to a warm welcome at our B&B which was right by the sea. Dinner that night was at the Arch Inn just up the road, enormous helpings of fish and chips, and our first taste of black pudding.

Ullapool was fun to explore with many small galleries and craft shops. The local museum was once an old Presbyterian church and the old pulpit is still standing. There was a fascinating exhibition about the Klondyke’s herring and fishing boats from Russia who regularly moored at Ullapool until the 1980s. The following morning we went for a 10 km walk in the misty heather covered hills.

We continued our journey stopping off at the Corrieshalloch Gorge National Nature Reserve. To reach the Gorge you had to cross a Victorian suspension bridge, high above a deep chasm. It was clearly signposted that only a few should cross at a time but to our dismay a large party of stocky German tourists, oblivious to the warning, crossed all at once. By the time we had realised what was happening it was too late to warn them. But the bridge, while swinging somewhat alarmingly,held.

We arrived in Cromarty, a charming old town on the tip of the Black Isle, with many historic buildings in time for lunch. This was where John’s ancestor Thomas Urquhart McKenzie was born. Unfortunately we weren’t able to locate any further information about him while we were there.

There would have been few prospects for the young landless labourer he most probably was as it was during the Highland clearances when small farmers were forced off their land. Thomas must have felt it was worth the risk to take passage on a sailing ship to a strange country to seek a better life for himself. Or perhaps he was just a young lad with a great sense of adventure.

After he arrived in New Zealand in 1840 at the age of 19 he worked hard and did well for himself. He married, had 22 children (of whom 19 children survived) and became a wealthy landowner who built a large homestead which he called Poyntzfield (it was later renamed Flock House).

A few kilometres outside Cromarty we visited the original Poyntzfield, a Georgian mansion which has been turned into a self-catering holiday home with an outdoor heated swimming pool and a full size antique snooker table in the games room. There is an adjoining herb garden.

Thomas would have been familiar with this house, and may even have tilled the surrounding land, although if he was a labourer he would not have been welcome to go inside.

It must have been a source great of pride to him to own a stately house of his own and to name it Poyntzfield.