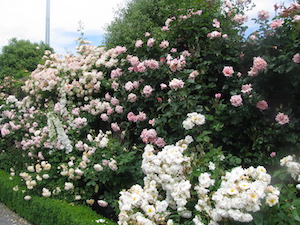 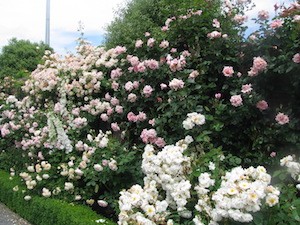 There is perhaps no greater sight in the world of roses than a climbing rose in full flower covering a fence, wall, pergola or archway. While they may have the perception of taking up plenty of room, climbing roses actually take up very little ground space and instead occupy vertical space making them ideal for even the smallest garden. Match the climber to the space available rather than the other way around. There are plenty of options for smaller gardens.

Climbing roses are very versatile and come in a range of habits, colours and flower forms. Many are also scented and because the blooms are at nose height, there is no bending over to determine if they are scented or not. The long flowering season also places them at an advantage over the likes of other climbing plants like clematis, wisteria and bougainvillaea which only have relatively short flowering periods. In fact, such plants can be used as companion plantings for roses giving colour when the roses may not be looking at their best. Just take care and ensure that the companion will not take over completely. 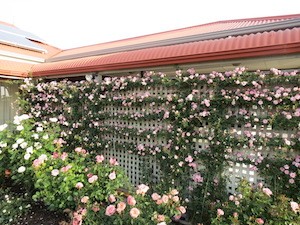 Climbing roses can be grown against anything, whether it’s ugly or attractive. Some of the large climbers can be used to cover sheds and grow up into large trees. On a more modest scale, climbers can be used against fences, pergolas, archways and buildings to provide a splash of colour to otherwise uninteresting areas.

Modern climbing rose varieties can be roughly divided into two categories, large flowering and small flowering varieties. Over the last 50 years, the range of colours available has increased among climbers and there is also improved disease tolerance and freedom of flowering. Many are also fragrant as well.

Climbing roses are easy to grow and don’t involve as much effort as you think. The biggest mistake people make with climbers is at pruning time when the treat them like a bush rose and cut them back too hard, then wonder why they don’t climb. The plant also spends the next season replacing the lost growth at the expense of flowers

Instead, the canes should be kept long and be trained into position. The best way to train climbers is into a fan shape as this will results in blooms along the canes, rather than just a few blooms at the end. If you do have limited room and want to train your climber up a pole, then stagger the height that the canes are cut so you have blooms lower down. Another good idea if you are growing them against a house or fence that may need to be repainted in the future is to make sure the supporting structure can be detached easily.

During the growing season, it is important to tie back any long shoots that are produced. Use softer ties, even old pantyhose are good as they won’t damage the growth. If planting new plants, don’t expect too much from them for the first season.
It can take time for some to settle in and get some growth on. Consider removing the flowers for the first season so the plants’ energy can be devoted to growing.

Some climbing roses worth growing: 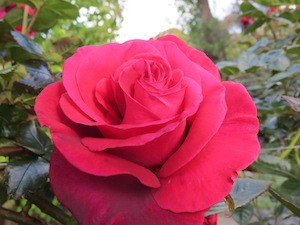 ‘Dublin Bay’ – this ever popular climber with glowing red blooms covering the plant. When in full bloom it is a great show and worth growing in any garden.

‘Compassion’ – one of the most fragrant of all climbing varieties with blooms of salmon pink with a yellow base. Free flowering and has good health, needs some room, though. 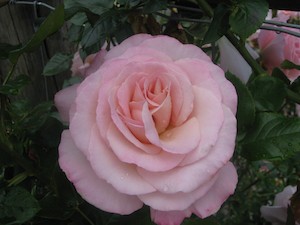 ‘All My Love’ (right) A wonderful variety with clusters of creamy pink blooms smother the plant. Great health and stunning in full flower. 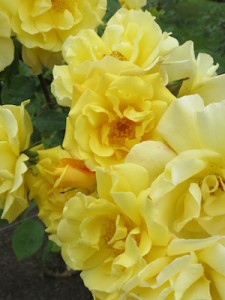 ‘Sundancer’ – A bright orange with yellow on the reverse of the petals. Healthy and free flowering. 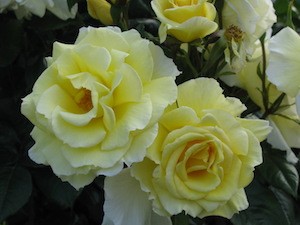 ‘Golden Future’ – (right) Clusters of creamy yellow blooms, very healthy, vigorous plant. Large hips in the autumn are a feature of this rose.

‘Dusky Dancer’ – Large clusters of rich ruby red blooms cover this plant which can also be grown as a shrub rose.

‘Jeanne Lajoie’- An older variety but still one of the best with masses of pale pink blooms covering the vigorous plant. 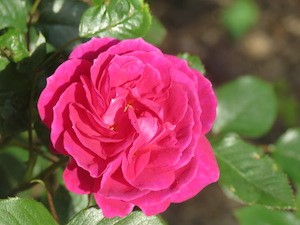 ‘Sugar Plum’ – (left) An unusual colour in the small flowering class, the magenta-purple blooms start early in the season.

‘Warm Welcome’ – Masses of single orange-yellow blooms cover this plant which is never without a flower. 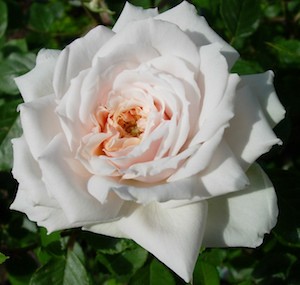 ‘Taffeta’ – (right) Creamy white quartered blooms in clusters. It has a good fragrance as well, one of the few patio climbers to do so.

In the rose garden for April:

Moving Time in the Garden!

Make Mine a Mulcher!