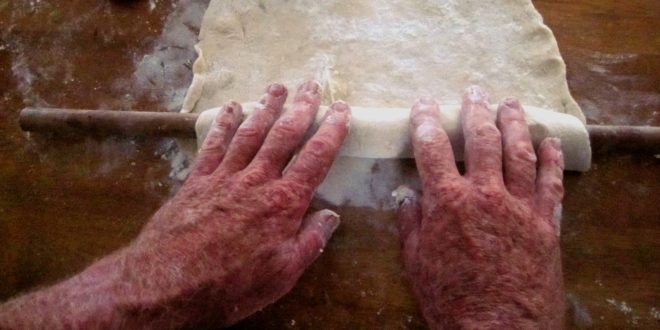 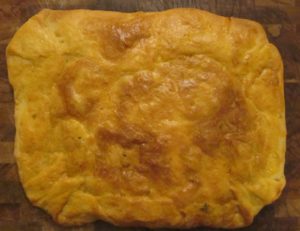 Think ‘Greek pastry’ and you’re sure to conjure up images of feather-light layers of filo. But what few people realise is that everyday Greek pastry is quite different, and is still made by villagers using traditional recipes handed down from generation to generation. Once you know how to make it (and roll it) you can use it to bake light, golden-crusted pies that are sure to attract compliments.

Enough hot (but not boiling) water to make a soft, kneadable dough.

Small quantity of egg and olive oil whisked together (for brushing)

Set the second measure of olive oil, and the egg and oil mix, to one side. Mix the remaining ingredients together and knead the resulting dough until it is soft and pliable.

Use baking scales to help you, divide the dough exactly in half. Roll each piece of dough into a ball. Flatten each ball into a side-plate sized disc. 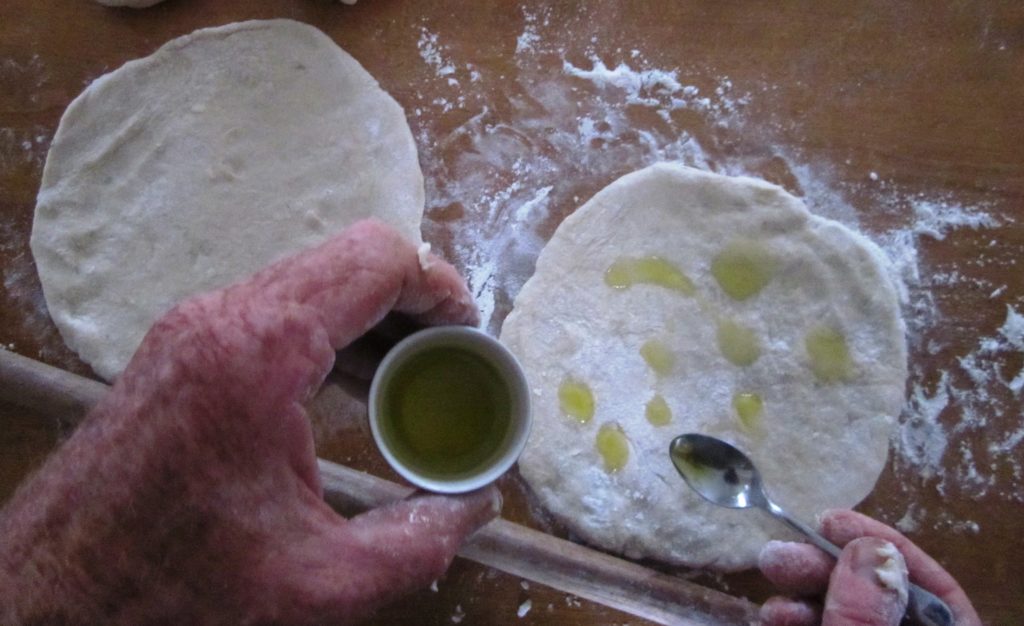 Paint the upper surface of one of the discs with olive oil. Place the second disc on top of this and seal the two discs together by firmly pinching the edges.

Roll out this double-disk, using the Greek rolling-pin method (below) until it is about 2mm thick.  Cut out the desired shape to fit your pie dish. (If you wish to make a large pie, double the recipe.) Before baking, brush the pastry with a mixture of egg and olive oil.

This method of rolling enables you to create a large, thin sheet of pastry which is easy to handle. First, make your Greek rolling pin by cutting an 80cm long section from a new wooden broom handle.

Lightly flour the surface of a table. Roll out your dough in both directions until it is roughly the size of a dinner plate.

Sprinkle the table and the upper surface of the dough generously with flour. This time, roll the dough in just one direction. When it becomes difficult to roll the sheet any flatter, employ the Greek technique as follows: 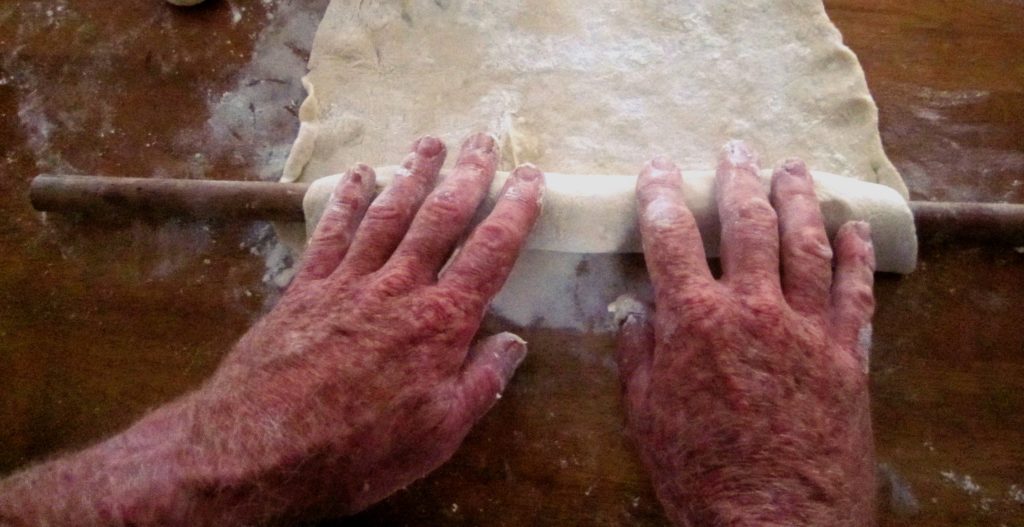 Begin with your hands in the centre of the rolling pin. Roll the pin back and forth a few centimeters at a time, gradually winding the dough onto the pin as you go. As you do this, you are pressing down lightly on the dough while moving your hands across the dough and out toward each end of the pin. Keep bringing your hands back to the middle of the pin and repeating the action until all the dough is rolled firmly around the pin. As you roll, your hands will actually be pressing down lightly on the several layers of dough wrapped around the pin but, if you’ve sprinkled on enough flour, the layers won’t stick together.

Keeping the sheet of dough rolled up round the pin, sprinkle the table with flour again. Unroll the sheet onto the table and sprinkle it generously with flour. Roll out the sheet again as described above, but in the opposite direction. 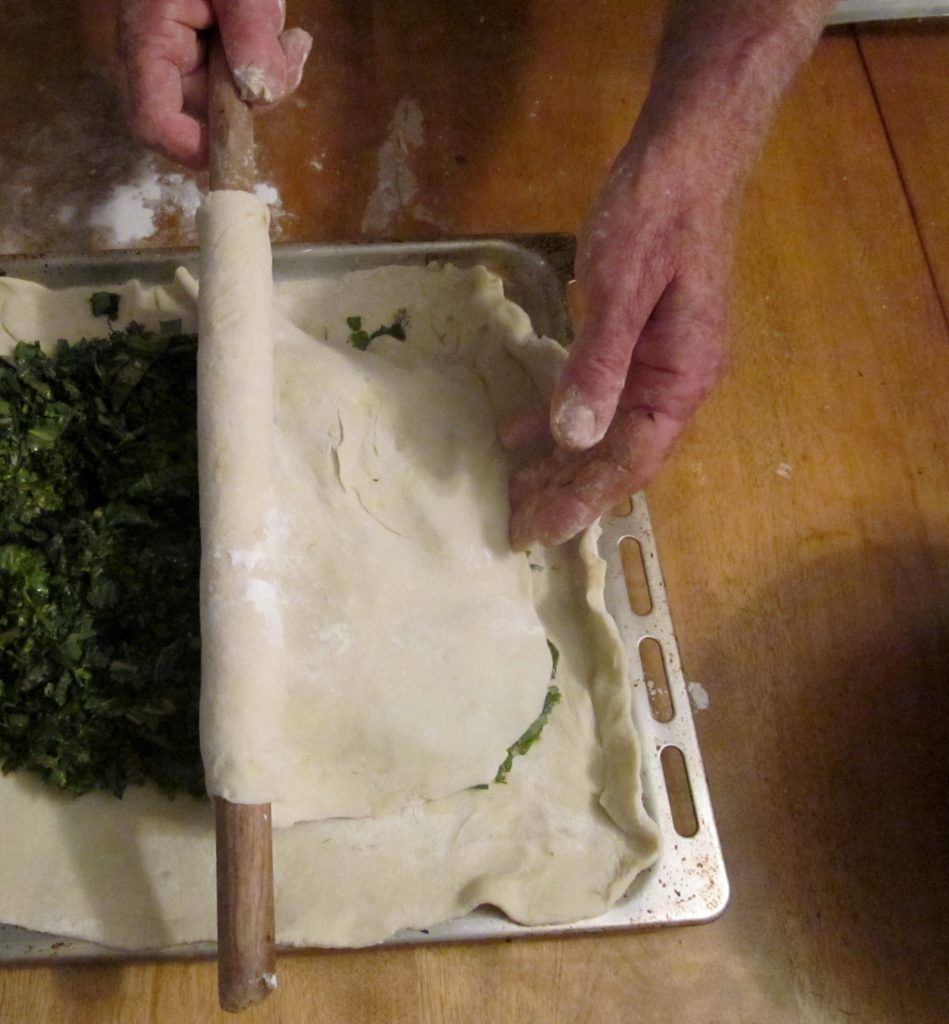 When the dough is about 2 to 3 millimeters thick, and wound around the pin, lay it over your pie dish or baking try, and slowly unwind it until the dough covers the container.

Previous Article Soap bars are back – and here’s how to make the most of them!
Next Article Cruising the Mekong Delta with Avalon Waterways 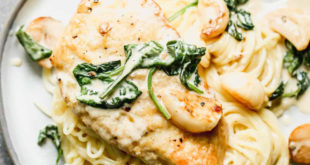