The popular story goes that in 1761 John Montagu, 4th Earl of Sandwich, reluctant to leave the gaming table to dine, asked to be brought slices of meat between two slices of bread. Some believe that this happened not at the tables but at his busy work desk, Montagu having been at one time or other, Ambassador to Spain, Principal Secretary of State to the Northern Department, Postmaster General, Secretary of State and for three terms, First Lord of the Admiralty…in which capacity he approved funds for Captain Cook’s second and third voyages. There is no doubt though that wherever it happened, his simple request established one of the most popular food styles in the world…the sandwich.

Simple the idea may be but today the possibilities are endless…double deckers, triple deckers, open, toasted, fried…all the fillings and sauces, the different breads…there is no excuse for a boring sandwich, an original masterpiece is within the reach of any cook!

Take the humble and potentially uninteresting egg sandwich; forget slices of hard-boiled egg in white sliced…soft-boil the egg and as soon as you can, shell it and roughly mash it with some mayonnaise or aioli, a little dry mustard, salt and pepper and chopped herbs…parsley is good but try a few fresh tarragon or chervil leaves, better still, chives. Spread slices of rye or good wholemeal bread thinly some more of the mayonnaise; pile on the egg filling together with some peppery watercress or rocket and put on the top.  This looks good as an open sandwich too, on pumpernickel.

Tuna sandwiches are a favourite with many; this Mediterranean double-decker is a bit different: Mash some tinned cannellini beans that you have rinsed and drained, with some chopped garlic, lemon juice, virgin olive oil and some chopped dill with salt and pepper to taste. Then in another bowl mix a tin of tuna, drained of the oil, with some chopped black olives, flat-leaf parsley, spring onion and celery, then add virgin olive oil, lemon juice and salt and pepper to taste. Mix. Both fillings should be moist but not sloppy. Butter three slices of country bread, one of them on both sides. On the bottom one spread the bean mix, cover with the middle slice (the one buttered on both sides) and on that spread the tuna with some onion or radish sprouts and lay on the top slice. You can mix in mayonnaise if you must but it doesn’t need it.

The meat lover will find this pork (or chicken) sandwich with hints of Thailand and places south-east gets the taste buds going.

Thinly slice some de-seeded cucumber and grate some carrots and white radish (daikon or mooli). Mix in a bowl with some chopped garlic and fresh chilli. Make a dressing of wine or cider vinegar, soy sauce, sugar and fish sauce and pour over the vegetables and leave to marinate. Thinly slice some red onion and roughly chop some fresh coriander. Thinly slice cooked pork (or chicken). Cut a sourdough baguette lengthwise and brush the cut sides with some of the marinade. Drain the vegetables and spread them along the bottom layer then lay the slices of meat on top and finally the sliced onions and cilantro. Put on the top, wrap the sandwich in plastic wrap and leave for an hour before eating to let the flavours mingle.

For a picnic or a very informal lunch with a glass of wine or two nothing beats the New Orleans muffuletta. It is not a sandwich that can be made at a moment’s notice but is all the better for a modicum of time and patience.

The next day, cut the loaf in half horizontally and pull out most of the soft interior (keep it for breadcrumbs, stuffing or thickener). Drain the olive mix retaining the marinade. Generously brush the inside of both halves of the loaf with the marinade then place half of the olive mix in the bottom half, leaving 1.5cm clear round the edge. Next put on a layer of green leaves and tomato slices, then in order, layers of sweet salami, cheese, spicy salami, leaves and tomato and finishing with the remaining olive mix. Cover with the other half of the loaf then wrap the sandwich in cling film. Put the sandwich on a flat surface in the refrigerator, cover with a plate on which place a kilo or so of weight. Leave it for at least an hour. If you are taking it on a picnic, it’s a good idea to cut it into wedges then to re-wrap it before packing the picnic. The ingredients can be altered to suit your taste and the size of the loaf.

I haven’t even started on the wonders of sandwiches of New York delis or English butties and tea sandwiches, the open sandwiches of Scandinavia or anything from Greece, the Middle East, South America, the Caribbean, Russia, India, toasted sandwiches, pita bread, flat breads etc. etc.. There is so much to choose from and absolutely no need to let your sandwich imagination atrophy with the same old, same old. So make your masterpiece! Fill a Monty! 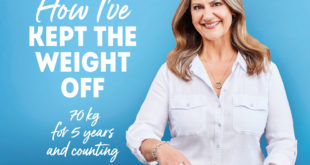 I’m often asked how I maintain my weight, and my answer is simple – not much changes from the weight-loss phase!