Kayleigh Towne is a beautiful and successful singer-songwriter, and Edwin Sharp is her biggest fan. When she replies to one of his fan letters with 'XO', Edwin is convinced she loves him, and that her latest hit song 'Your Shadow' was written for him. Nothing Kayleigh or her lawyers can say persuade him otherwise.

Then the singer gets an anonymous phone call; it's the first verse of 'Your Shadow' playing. Soon after, one of the crew is horribly murdered. Kayleigh's friend Kathryn Dance, a special agent with the California Bureau of Investigation, knows that stalking crimes are not one-off occurrences, and, sure enough, more verses of the song are played as warnings of death to follow. With a little help from forensic criminalist Lincoln Rhyme, Dance must use her kinesics and investigative skills in an attempt to find the killer before more people die.

Deaver has written the actual song, 'Your Shadow'. Readers will be able to download it from www.jefferydeaver.com.

Jeffery Deaver is the creator of the character Lincoln Rhyme, and is the award-winning author of 29 internationally bestselling thrillers, including the new James Bond novel Carte Blanche. He lives in North Carolina.

Q & A With Jeffery Deaver

Q: You've been described as a 'psychological thriller writer.' Do you think this is accurate?

Jeffery: It's accurate to the extent that I explore the psychology of crime and crime detection in my books: the minds of the criminal and his hunters. I also try very hard to create characters — both heroes and villains — with psychological depth. In other words, the people who populate my books are more than caricatures. We inhabit their minds throughout much of the book. Of course — as in my Lincoln Rhyme series — there's a great deal of forensics and police work that has little to do with psychological profiling.

Q: What is the best advice about writing anyone ever gave you, and who gave it?

Q: How much of the stories come from your real life experiences?

Jeffery: In my case, none. I was an attorney but I practiced corporate law. It means working harder to do the research but I don't really mind — I don't think I have what it takes to chase criminals through back alleys and wade through blood at crime scenes.  Of course, all writers draw upon their personal experiences in describing day-to-day life and human relationships, but I tend to keep my own experiences largely separate from my stories.

Q: What portion of your writing time is spent in research? How do you research?

Jeffery: I spend about eight months researching and outlining my book. Most of this is through books, publications and the Internet. I do, of course, interview individuals who're knowledgeable about the subjects I'm researching but doing this often results in too much information. There's nothing wrong with over-researching but there's a problem when you put too much of your research in the book. All the technical details have to further the plot. If not, out they should go.

Q: You trained as a lawyer. Why do you think so many lawyers and doctors become novelists?

Jeffery: The easy answer is that writing novels is a lot more fun than practicing law. But there is an analytical component — a left-brained component — to writing crime fiction that I think is an element of such professions as law, and medicine as well. For me a thriller is a very carefully structured story. I spend eight months outlining and researching the novel before I begin to write a single word of the prose. The skills I use to do that are the same I used when practicing law — researching and structuring a legal document or case.

Q: You've also been a folk singer. What led to that interest?

Jeffery: Ah, there's nothing like music. It's seductive, it's all-consuming, it's emotional, it's infinitely creative . . . . I was a singer-songwriter, not particularly talented musically but drawn to the craft of song writing. I liked the challenge of writing in a very concise structure in which both meaning and form are important. (It's far easier to write long than it is to write economically.) I performed and taught music in clubs in the San Francisco Bay area and Chicago. But that was years ago and I don't do it anymore.

Q: Were you happy with the movie version of The Bone Collector? And were you involved in making this movie?

Jeffery: I thought the movie was very good. There were probably some things I would have done differently but my expertise is in writing novels, not making movies. Directing films is extremely arduous work and I wouldn't want to do it for any money. I let the movie-makers do their thing and they let me do mine. That's a great relationship. And, no, I was not involved with the making of the film.

Book Giveaway | By the Green of the Spring 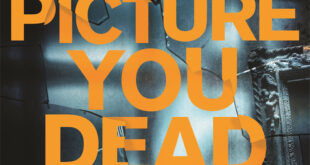 We are very pleased to be giving away two copies of Peter James's book 'Picture You Dead' to our GrownUps members.