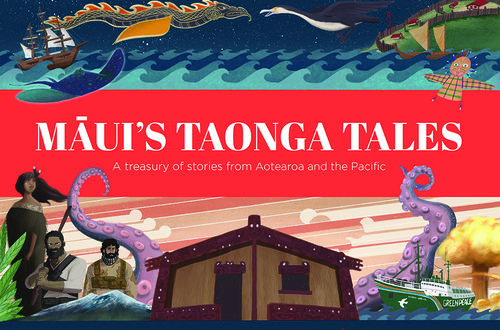 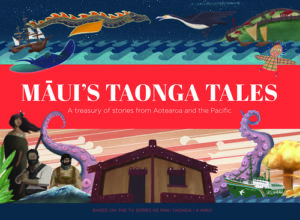 Maui, the great Pacific hero and trickster is the storyteller in Maui’s Taonga Tales: A Treasury of Stories from Aotearoa and the Pacific. He tells them well with a touch of his irrepressible humour.

Each story is linked to a taonga from our National Museum Te Papa. Some are myths and legends from long ago, others happened in more recent times.

One of the most iconic and one that many children will already know is about how the kiwi lost its wings, When none of the other birds were willing to help it was Kiwi who sacrificed its power of flight to help Tane Mahuta to rid the forest of the crawling bugs which were destroying it. As Maui sees it kiwi deserved to become Tane’s favourite bird, and ours too.

War stories are almost always about the bravery of the soldiers and the sacrifices they made. But there’s a beautiful story about Heni te Kiri Karamu’s compassionate behaviour. After 1500 British Fighters lost a battle against just 200 Maori warriors at Gate Pa, she brought some of the wounded soldier’s water to quench their thirst because she felt that although they had lost the fight, they had fought bravely

The lesson Rata learnt about the need to respect our natural environment when he tried to cut down a totara tree will resonate with environmentalists.

Maui just had to slip in a story about himself and how he managed to teach his brothers a lesson they will never forget. They only caught fish, but he fished up the whole of the North Island with a fishhook which he had cleverly fashioned from his kuia’ s jawbone.

Stories from more recent times include the terrible misunderstanding which led to death of eight Maori during Cook’s first encounter in New Zealand.

Many of us will remember hearing the Pasifika reggae band play French letter Herbs’ song against nuclear testing in the Pacific after the sinking of the Rainbow Warrior, an event which shocked New Zealanders and increased our determination to stop the tests.

The story of how Willie Apiata (our previous Governor General) risked his own life and showed incredible bravery to save a comrade in Afghanistan is in there too. This humble man said he just did what he was trained to do. His uniform is displayed in Te Papa.

These  tales of great bravery, compassion, sacrifice, and love (and there’s some bit of skulduggery in there too from Maui’s brothers)  told through a Maori lens are ones for all of us to share and enhance our knowledge about New Zealand’s past which has shaped us as a nation.

Maui’s Taonga Tales: A Treasury of Stories from Aotearoa and the Pacific is beautifully illustrated by eight young Maori artists. For children who love art this will add greatly to the appeal of this book and they may well enjoy checking out the different styles and techniques. There’s a brief description about each artist at the back of the book as well.

The glossary at the back of this book of Maori words used in the stories will help to build children’s’ Te Reo vocabulary. There is also a Te Reo Maori companion book He Paki Taonga i a Māui.

I think it is a very special book for children 7 years up and well worth adding to the family bookshelf.