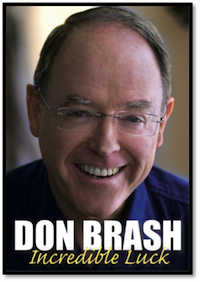 Few outside Parliament today know how this country is governed better than Dr Don Brash.

He’s been closely involved in the economic and political life of New Zealand for more than four decades. So, in an election year, a chapter devoted to an assessment of the Key Government, in a book he penned himself, is provocative.

Incredible Luck is no ordinary autobiography. But then, Brash is no ordinary man. The former head of the National Party and brazen over thrower of the Act Party’s then leader, Rodney Hide, is never one to follow.

Instead, Brash discusses his failures and regrets, as well as his successes, as objectively as he can. He shares his thoughts on a wide range of topics such as:

• One law for all

• The difficulty of making economic policy in a democracy

• And the future of democracy

The book also draws us deeply into Brash’s personal life and, in particular, the way in which the time and circumstances he was born into shaped him and his outlook today. Despite setbacks and very public fallouts, Brash is an optimist.

“What prompted me to write this book was not disappointment, and certainly not anger. Rather, it was a growing awareness of how incredibly lucky I have been, and continue to be.” Don Brash – Incredible Luck.

It is the only book he has written since his doctoral dissertation in the 60s – not counting innumerable monetary policy reports and similar – and he says it will be his last.

Don Brash was born in Wanganui and brought up and educated in Christchurch.  After doing a PhD in Economics at the Australian National University in Canberra, he spent five years at the World Bank in Washington, working with both Lester Pearson (former Prime Minister of Canada) and Robert McNamara (at that time President of the World Bank).

Since returning to New Zealand in 1971, he has been chief executive of one of the first overseas-affiliated investment banks (Broadbank), of the New Zealand Kiwifruit Authority, and of the Trust Bank Group.  During the eighties, he chaired a number of government advisory committees, including the committee which designed the Goods and Services Tax.  In 1988, he became Governor of the Reserve Bank, a position he held for almost 14 years before entering Parliament in 2002.  In October 2003, he became Leader of the National Party and came close to winning the 2005 general election.

He left Parliament early in 2007, and since that time has been on a number of boards, including the ANZ National Bank and Transpower; has been an Adjunct Professor at the AUT University in Auckland and LaTrobe University in Melbourne; has undertaken consultancy projects in Cambodia, the Pacific Islands and the Bahamas; has been briefly the Leader of the ACT Party; and has given lectures in the US, Mexico and China.

He is currently chairman of the recently established New Zealand subsidiary of the Industrial and Commercial Bank of China and spends his spare time helping to convert a kiwifruit orchard which has been owned by his family trust for many years to one of the new gold varieties of kiwifruit.

He has three adult children, and four grandchildren.