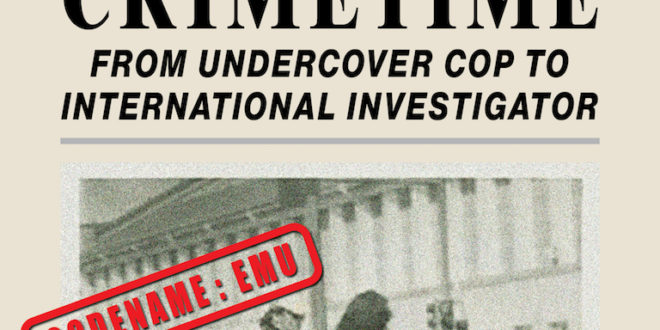 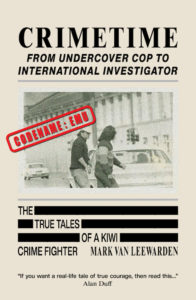 I didn’t think I could write a book, but a sequence of events taught me I could. Around seven years ago I was contacted by Alan Duff who wrote ‘Once Were Warriors’. He had seen a media article about me and asked if he could write a book about my life.

I agreed and he set about writing the book, but in the end said he couldn’t do it justice as it wasn’t his story. He suggested it would be better for me to do it, and with his positive support and mentoring, that’s what happened. The book ‘CrimeTime’ is a true account of my life and career………

My entry into the Police undercover programme happened one day at the start of a shift, when I was working in uniform in Dunedin. I had just turned twenty and was shoulder tapped by a Detective Sergeant, who asked me if I wanted to give it a shot. There was no cautionary sage advice about potential downsides, but even if there was, I would have ignored it. When you agree to enter the undercover programme you can never truely comprehend how you will be affected.  It really is impossibly uninformed consent.

Neither you nor those running the programme can envision what your scene might be like, or the actuality of the risks you might be faced with.  It is the ultimate roll of the dice and step into the unknown.  It’s playing Russian roulette with your personality.

At the time, New Zealand was one of the few countries to run a total immersion Police undercover programme. This involved being dropped into a criminal scene and having no links with your former life. You were to live as a criminal. Your only link to society being your Police operator.

I attended an undercover seminar; myself and other prospective agents were instructed in the dark arts of covert operations and working undercover. I was deployed to Auckland, a place I’d never been before; hell, I’d never even seen a motorway!  I was dropped into hard core pubs and told to make criminal connections.

As it happened, this occurred very quickly. Inside three weeks I met a senior underworld figure, and it was through my association with him that I was introduced to criminal figures throughout Auckland. I operated as a fence, that is, a receiver of stolen property. I used a downtown pub as a base and bought stolen property and drugs from street criminals.

As I mention in the book, there is a total divide between your previous life and the criminal persona you adopt. My circle included junkies, hookers, burglars, hitmen, safe crackers, strippers, card sharks and gang members.

After nearly a year in the scene, on Labour Day 1979, my undercover operation took a very bad turn. I was drinking at a central Auckland hotel with my associate, his girlfriend and a Black Power member. Events went seriously awry with one of our group left dying on the steps of the hotel.

Because of what had happened, my operation terminated. Over one hundred people were arrested and charged with crimes including drug dealing, burglary, theft, serious assaults, receiving stolen property, robbery and murder. When I finished, there was a contract to kill on my head. When I went to court, armed bodyguards escorted me and snipers were stationed on the courthouse roof.

After termination, I was fast-tracked into the CIB, qualified as a detective, and worked in various investigation squads before joining the Auckland VIP Protection Squad. Our primary role was to protect the Prime Minister, who at the time was Robert Muldoon. I also worked on protection details for Prince Edward, Captain Mark Phillips, Princess Anne, Ted Heath, and former US President Jimmy Carter, amongst others.

I did private sector bodyguard work after leaving the Police, and protected a number of high profile dignitaries. One of those was Donald Trump, when he visited to try and secure the casino license in Auckland. I found him impossible to dislike.

I completed an LL.B Honours degree at Canterbury University and was admitted to the Bar as a Barrister in 1992. Taking advantage of my investigation experience I set up in the international fraud investigation and recovery field as a specialist investigating barrister.

One case involved a twenty-million-dollar fraud, perpetrated on a Swiss bank which involved inquiries in Thailand, Malaysia and Switzerland. There were also links with the Japanese Yakuza organised crime group.

Just after the twin towers in New York were destroyed by terrorists, I was instructed to act in a USD100 million-dollar fraud case. I acted for 322 victims from 30 countries.  The fraud was committed by the Russian mafia operating out of New York. I successfully seized funds and as a result of the investigation, eight individuals were prosecuted, receiving between five and fourteen years’ imprisonment.

The fraudsters you are dealing with live in a world of greed, ego, callousness and duplicity. The reality of this type of work is that if you are effective at freezing money and creating legal exposure, then you become a target… 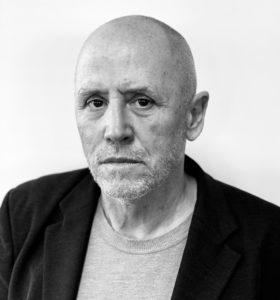 ‘Crimetime’ is the true story of a Kiwi cop who survives the dangerous double life of an undercover agent and goes on to become New Zealand’s most successful international fraud investigator.

I first read about Mark’s extraordinary story in the New Zealand Herald online while living in France some five years ago. I made contact with a view to maybe write his story because it was so fascinating. We met and I decided to have a crack.

Sadly, my attempt fell well short. I know why: It was his story, he had lived it, especially that one year undercover with some of Auckland’s most hardened criminals. He was only twenty. You talk about good acting. This young man acted brilliantly because every long, usually drunken day, his life was in danger.

It would only take someone from police training days to recognise him and recall old times and he was dead. Or for some drunk paranoid crim to point the finger and call him a “nark.” Narks in every criminal society are the worst form of life that must be obliterated. Mark withstood this intolerable pressure for a whole year.

A year that ended in him witnessing an actual murder. He was right there. He knew the guy who did it, and his girlfriend victim. But love had its nose in here too, as unwittingly he crossed paths with his future wife, a constable attending the scene of the murder. Meeting later as members of the same Auckland Police squad, they have now enjoyed thirty-plus happy years of marriage.

The private investigator Mark van Leewarden is also another incredible story, more often than not fraught with danger chasing fraudsters around the world and frequently nailing them.

Read this book and marvel at one very courageous, determined, even relentless, genuine good guy.