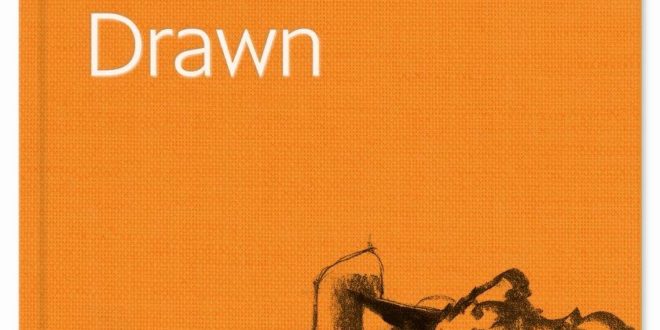 In February 1982, Pete Bossley, a young architect, left New Zealand for a yearlong OE to Japan, Europe and the United States. His marriage had just come to an end and apart from wanting to see the great architectural wonders of the world he felt the need to get away from it all and find himself. He left behind his two young daughters who he would miss very much while away. 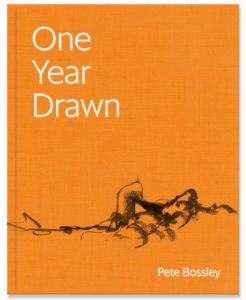 Pete Bossley, today one of our foremost architects, still has vivid memories of that journey and has retold it in One Year Drawn based on the notes and drawings he made at the time.

It was a journey on which he was able to indulge his twin passions for architecture and drawing. The drawings were done in a series of ten cheap journals. The first was just a spiral bound notebook bought in Tokyo airport for 150 Yen which he filled with sketchy diagrammatic architectural drawings with a blue ballpoint.

As each journal was filled, he bought another. Over time his drawing skills developed.  He introduced colour with felts, pastels and oil sticks and   experimented with different techniques. His drawings changed from realism to a more personal, emotional response. In the accompanying notes he recorded what he saw:  the structure, colours, materials and architectural styles of the buildings, cityscapes and landscapes, and his encounters with people he met along the way.

As the spirit moved him and as opportunities came his way, he roamed from place to place making fleeting friendship with other travellers and enjoying the hospitality of strangers. There were some challenging experiences, he was briefly laid low by a dose of the flu, caught the wrong train, and felt overwhelmed at times by the poverty he encountered. But overall his was a brilliant, memorable journey.

Many of the drawings he made on that journey are included in One Year Drawn making it a visually lovely book which I think both art lovers and travellers would enjoy.

One Year Drawn is by Pete Bossley. Point Publishing, RRP $55

This January we went to the Auckland Art Gallery to view ‘A Place to Paint.’  By Colin McCahon, one of New Zealand’s foremost painters. This exhibition of paintings, which he completed during the three decades he lived in Auckland, was put together to mark his centenary.

When he first moved to Auckland, he wanted to capture the light flickering through the kauri trees close to his new Titirangi home. And to paint the views over French Bay which he saw as he travelled to work in the city each day. These joyous paintings radiate his love for the natural environment.

As I moved through the exhibition his works became more complex and somber and I found it increasingly difficult to unravel all the meanings behind the fragmented landscapes, symbols, lines of poetry and biblical quotes. His last painting, completed just before he died and found upside down in his studio, shows a deep despair. 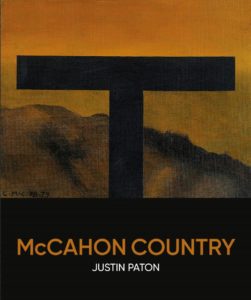 Then in his lyrical and engaging style he drew me in as he followed McCahon’s travels throughout Aotearoa in a series of essays, arranged not in a strictly chronological way but around themes including Valley, Bush, Sky, Whenua and Fire.

In the 1940’s, when he was in his twenties, McCahon explored Otago peninsula which was close to his Dunedin home on foot and by bike. It inspired one of his first landscape paintings. During the rest of his life he travelled to many other parts of New Zealand, He could sit and look at a landscape for hours before going back to his studio to paint. But more than their physical beauty he imbued them with spiritual significance as part of his turbulent journey of faith.

This summer, as the bushfires in Australia turned the skies a fiery red, creating an almost apocalyptical atmosphere, McCahon with his deep concern about our fragile earth felt strangely relevant. As if his prophesies were coming to pass.

Justin Paton’s passion for and deep knowledge of McCahon’s paintings has greatly increased my appreciation and understanding.It is a very special book for art lovers to read and treasure.

SCAPE started with just a small group of visionary Cantabrians who wanted to bring art into public spaces, free for all to see.

Over the last two decades SCAPE has been the driving force behind Christchurch’s vibrant public art scene bringing performances, installations and both temporary and permanent artworks into the city by organising a series of biennials (until 2016) followed by annual festivals. 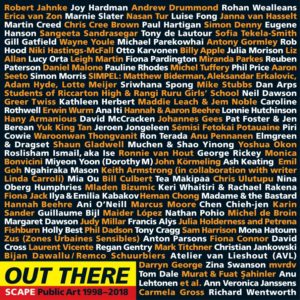 SCAPE accomplished this by bringing art, local industries and businesses together, and getting support from local and international sponsors and from the Christchurch City Council .With everyone working together they have pulled off some amazing projects and left the city with some very special legacy pieces including Neil Dawson’s Fanfare, the largest outdoor sculpture in New Zealand and 2 cast iron figures ‘Stay” by world-renowned sculptor Antony Gormley.

In OUT THERE: SCAPE Public Art 1998-2018 by Warren Feeney celebrates what they have achieved over two decades. Included are more than 100 interviews with those who have been involved in supporting and planning SCAPE, and with many of the 230 artists. Many photographs of the artworks are also included. As many of these were temporary this is an important record.

It has not all been straight sailing, but this was to be expected as part of the role of public art is to disrupt, to take people out of their comfort zone, and start some lively conversations. There was such a big public outcry that Michael Parekowhai’s giant Disneyesque fibreglass rabbits never got off the ground.

Other sculptures have been immensely popular like Hanna Kidd’s figures which look so lifelike and approachable. People generally take them at face value without realising that there is a deeper meaning and that the lady feeding a stray cat out on the street is actually a symbol of those who offered kindness and support to others following the earthquake.

After the 2010-2011 earthquakes SCAPE played in important role in the Christchurch rebuild. They brought hope and life back into the CBD by providing new artworks, installations and performances for people to enjoy. These also helped to attract much needed visitors back to the city.

SCAPE has proved to be such a successful model for turning Christchurch into a contemporary innovative cultural centre that I would love to see it emulated in some of our other cities. Not only because art can enrich people’s lives in so many ways but because it has proved to be such an effective way to form new partnerships and build a sense of community.

OUT THERE: SCAPE Public Art 1998-2018 is a very comprehensive overview which art lovers will enjoy reading. It would also be a great background read for those who are thinking of visiting Christchurch and would like to know the back stories of its public art.

Previous Article 15 minute – chicken enchilada
Next Article OK millennial, why are you so angry?