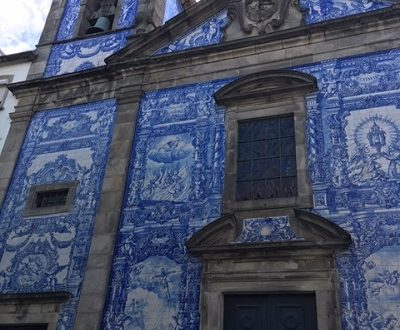 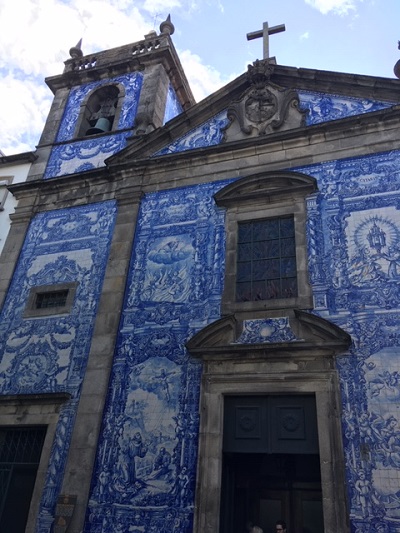 Porto, Portugal’s second largest city, is very hilly! During much of our time there we climbed up and down narrow cobblestoned roads dodging cars and trams.

It was always a bit of an ordeal to have to climb the many steps leading up to our apartment after a day’s sightseeing. Our apartment was small and modern, filled with Ikea furniture, and just a short walk to the old town.

Adding greatly to the city’s beauty are the blue and white azulejos tiles which cover many buildings, houses, cafes, churches and metro stations. Arguably the most magnificent are the tiled murals covering the entrance hall of the Sao Bento rail station, designed by Colaco in 1930, which tell stories about Portugal’s history. These are so stunning that you simply have to allow enough time to take some pics on arrival or before departure.

Porto is the home of port so a tour of the Calem cellars, where 6 million bottles of port are produced each year, was a must. We’d hardly seen any other Kiwis in Portugal but there were three other couples on this tour. The port is matured in massive floor to ceiling oak barrels. The tour included an entertaining informative talk on the various types of port. The highlight was a couple of tastings, delicious!

Porto is also famous for its sardines. Large quantities of exquisitely packaged cans were on display in the gift shops; the supermarket versions were much cheaper which is where we bought a can of sardines in tomato sauce to try. These were much larger and milder in taste than the ones we buy in NZ, more like herrings and quite palatable for a quick lunch with hunks of fresh bread. But we were not tempted to buy any as souvenirs for our family back home guessing they would much prefer one of the well-made cork products, a fridge magnet, a ceramic tile or a piece of  jewellery from the market. 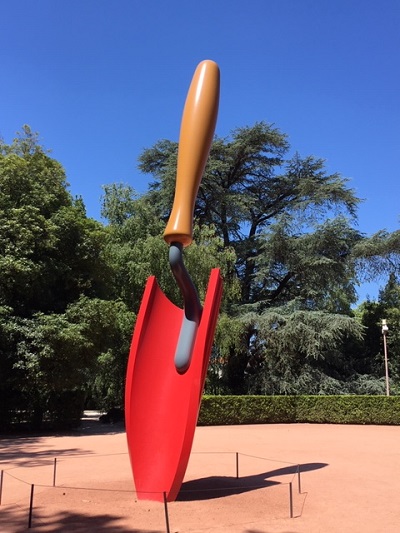 To go further afield we bought two day hop on/hop off tour tickets. The tour bus took us to Serralves where we visited the popular contemporary art museum before taking a leisurely walk in its extensive sculpture garden. At its entrance stood a monumental Claes Oldenburgh sculpture of a garden trowel. I had never before had the opportunity to see one of his iconic sculptures, in which he transforms ordinary objects into huge public art works, so this was an unexpected highlight.

Afterwards we hopped back on the bus and stopped off at the fresh fish restaurants at Matosinhos. Here you can choose whichever you fancy of the catch of the day and watch as they are cooked on the grill outside. Alongside we ordered a side of potatoes and got about half a dozen each!

As we were driven along the seafront we were surprised to spot large number of pohutakawa trees lining the Atlantic sea front. They all looked about 25 – 30 years old and were just starting to come into flower, maybe a gift from NZ. 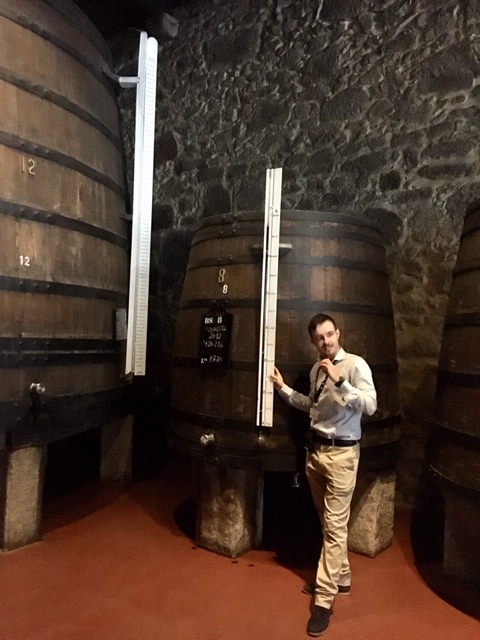 The tour also included a scenic Douro river cruise which took us under 6 bridges each built at a different historical time. The oldest and most decorative was by the same architect who designed the Eiffel Tower.

One thing we didn’t do was to join the long tourist queues at the bookshop and cafe where JK Rowling wrote the first three chapters of Harry Potter and the Philosopher’s Stone (she was an English teacher in Porto at the time) as we both have an aversion to standing around waiting in long lines. No doubt our granddaughters who are passionate Harry Potter fans will be disappointed in us.

Porto was our last port of call in Portugal. From there we would fly to Frankfurt to stay for a night and day before getting on our Thai Airways flight to Auckland.

We’d seen such a lot in a short time, and it had all been a great experience, but it would be good to get back home.

Breakfast On The Beach! 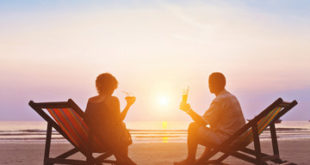