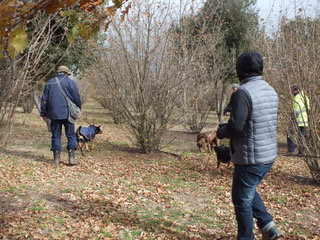 His dog has located a truffle under the ground and Denzil is checking whether it’s ready to be harvested, using the time-honoured method, the sniff test.

As I can’t distinguish truffle from soil, I hang back and the honour goes to Nikki Bell, a Sydney chef, who takes the proferred old knife and battered spoon, then scrapes carefully, exposing a brown lump a bit bigger than a golf ball and weighing about 100g.

We take turns sniffing, inhaling the unique earthy warmth of Périgord black truffle (Tuber melanosporum), the prized variety that does exceptionally well here in the Tarago-Bungendore area of the Southern Tablelands near Canberra.

Unrelated to mushrooms, truffles grow underground on the roots of host trees and dogs are ideal at sniffing them out. In the past, the French hunters used pigs but they had to be restrained from eating the “black diamonds” and canines eventually replaced porcines.

Probably the world’s most expensive delicacy (the top New Zealand price was $3500 a kilogram), truffles are used to enhance flavours, not served alone. Well, at the price, who could afford to?

With his wife Anne, Denzil Sturgiss owns Tarago Truffles, growing truffles since 2002 as a sideline to sheep. Hazelnuts and two kinds of oak trees were bought from a nursery that specialises in inoculating the roots with truffle spores of Périgord black, the most valuable of the world’s commercial varieties.

As well as demanding hot summers and cold winters, truffles need a very alkaline soil with excellence drainage, plus patience on the grower’s part as there is a wait of three to five years before saleable fungi are produced.

In winter, when the truffles are harvested, growers like the Sturgisses host truffle hunts. What makes theirs so special is that it is preceded by a blessing of the dogs.

Having gleaned most of my truffle knowledge from Martin Walker’s detective novels set in the Périgord region of France, I expect the dogs to be Bassett hounds or maybe Italian Lagotto Romagnolos. To my surprise, the 20 or so in the Tarago lineup range in size from a couple of Jack Russells to a chocolate Labrador. Then there’s a Border Collie whose owner says, unfortunately, the dog is better at rounding up sheep (his off-season work) than locating truffles, plus several rescue dogs.

The people are as diverse as the dogs, “all drawn by the ugly truffle”, as one says.

After the blessing by Anglican Bishop Tom Frame, the hunt is on – but not before everyone, including the dogs, steps into a shallow bath of chemicals to prevent feet or paws tramping harmful bacteria into the truffière.

The dogs do the work, the visitors sniff the results, then we retreat for lunch, featuring – what else? – truffle-infused artichoke soup, then chicken enhanced with flecks of the fungi. The meal, with wine donated by Contentious Winery, is followed a charity auction of a splendid fist-sized truffle that sells for more than $600.

By Gillian Vine, an enthusiastic gardener, writer/photographer, mature traveller and food lover based in Dunedin. 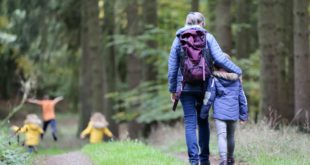 You have probably heard the mantra ‘Reduce, Reuse, Recycle’, and know how to reduce your ...