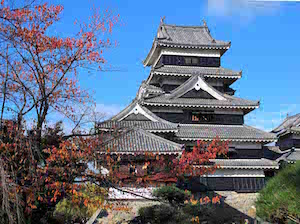 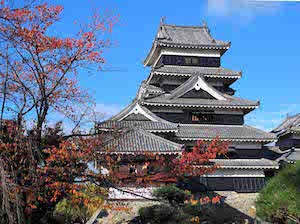 We’re back home after a wonderful holiday in Japan with a bunch of great memories.

Of the largest cities (Tokyo, Osaka and Kyoto) it was Kyoto, Japan’s cultural and historical centre, which we had found the most fascinating. Especially our visits to Nijo castle, the glittering Golden pavilion and the fantastic Nikishi food market.

But our fondest memories are of the beautiful autumn colours as we travelled through the often mountainous landscape, staying overnight stay in some small villages. And spending a few days in Kanazawa. Takayama and Matsumoto . These three towns are still sizeable by New Zealand standards but are less touristy and not nearly so crowded but there was still plenty to do and see.

Some of the highlights for us were:

This is considered to be one of the three most beautiful landscape gardens in Japan and was first laid out in 1676 as an outer garden of Kanazawa Castle.

Here a group of school children made a beeline for John to interview him about where he came from and what he thought of the garden. Good English practice for them and for us fun to have a chance to meet some young people.

We were intrigued by a memorial plaque dedicated to a 500 year old tree. Trees are obviously revered in Japan.

We were there at the right time to see how a team of workers were cleverly fitting protective covers over the trees to prevent snow damage in the coming winter.

The 21st Century of Contemporary Art.

This is reputedly the best modern art museum in Japan. What a treat to go inside this modern circular glass building to view some superb contemporary art by both Japanese and International artists.

Walking across a hanging bridge to see this small village with its distinctive Gassho-zukuri “Praying-hand style” grass roofed buildings.

We overnighted at Ootaya, a family operated Japanese style bed and breakfast in a traditional farmhouse. Here we had a chance to meet a local family; to sleep “Japanese style” in a small tatami matted room on futons and to have our first in house onsen experience.

Takayama:  In the foothills of the Japanese Alps

Meeting up for a drink in his hotel lobby with our old friend Neil from Waiheke Island. He was on a guided tour of Japan with a bunch of other kiwis and was loving his time in Japan as much as we were.

He is eighty, and on his own now so preferred to travel with a small group with an experienced tour guide.

But for us it had been the right decision to book an Independent Tour of Traditional Japan with ‘Inside Asia.’  It had made it much easier than arranging everything ourselves as our accommodation and most of our travel arrangements were sorted and paid for.

We were provided with booklets for each place we visited with a map, lots of different options for things we could do, places to visit and where to eat.

But it left us free to do our own thing and to explore as we pleased at a leisurely pace while knowing that our “invisible” tour guide Nathaniel (who is based in Japan) was only a phone call away if we got lost or struck any kind of problem.

Doing this 2 hour walk which started in the Higashiyama Temple District with 13 temples. Then on to Shiroyama Park where Takayama Castle once stood on a hilltop and there is a traditional Japanese graveyard. The last part was through a residential area. We finished up at a little restaurant with a great view of the city where we enjoyed a steaming bowl of soba noodles with mountain vegetables.

We were not there at the time of the Takayama  Mitsuri ( a biannual Festival held in both spring and autumn , the third largest festival in Japan.  Eleven gigantic floats, which are built on wheels, are pushed around the town  by local people dressed up in traditional kimonos.

But we were able to see some of these intricately carved and lavishly lacquered floats in a local museum.

Wandering along one of Takayama’s biggest morning markets in the morning sun  by the river in the centre of the town and sampling some of the local food.

On the river side there were vegetables, fruits, pickles and spices. On the other side were a string of small shops selling mainly sweets and crafts and some souvenirs.

Here we sampled a local delicacy, a small chewy piece of octopus battered and deep-fried served with soy mayo and bonito fish flakes and nibbled on a bag of crisp little rice crackers.

Exploring Matsumoto Castle, one of the few remaining castles in Japan. Once a military stronghold and painted black to strike fear into the hearts of approaching opponents, it was nicknamed The Black Crow.

The openings in its walls were for shooting arrows, firing guns and dropping large stones on the enemy. And there is a substantial display of all the nasty weapons the samurai used.

The steps leading to each of the five levels are steep. But when you reach the top there is a great view of the Southern Alps on a clear day  and look down a  large garden planted with pine and cherry trees

The Matsumoto City Museum of Art:

In 2009 the exterior of the Wellington Art Gallery was covered in polka dots for the “Dots for Peace and Love “Exhibition by world famous contemporary Japanese artist Yajoi Kusama , a national treasure in Japan . I had been to see it and been fascinated by her surreal installations, mirrored to infinity which if you looked at then for too long made you feel dizzy.

So it was a special surprise to discover that Yajoi Kusama, in her eighties now,  had come home to live in Matsumoto  and that there was a special exhibition of her work in the Matsumoto City Museum of Art.

We could have travelled  there in a Yajoi  Kusama designed polka dot bus but as it was not too far from our hotel we walked. There was a large collection of her art here for us to admire, including 50 new prints she had made especially for this exhibition.

From Matsumoto we travelled to Magome village, hiked the historic Kiso trail, overnighted in Tsumago and then to Kyoto by train.

Hi Geni
Good to hear that you might also like to do this kind of tour.
If you email
Nathaniel Saito [nate@insidejapantours.com]he will be able to give you further information about it and also about some other Japanese tours. This would help you to look at a range of options in different parts of the country, both self guided and guided.
I do hope that if you do go that you will enjoy it as much as we did.

What organised tour did you go on? We would love to do one like this.