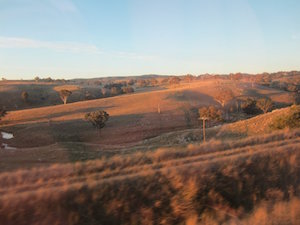 Continued from Part One…

We left Albury bang on noon, and from that border-town the Melbourne-Sydney railway line runs from Victoria into the state of New South Wales, heading north-east towards Wagga Wagga. But even after those first several hours the seven-carriage XPT (express passenger train) from Melbourne had covered only a quarter of the day’s journey. Outside, the sky was classic Aussie – brilliant blue and almost entirely cloudless.

The buffet-car, replenished and reopened after the stop at Albury, offered, via the intercarriage loudspeaker system, hot meals of chicken schnitzel with salad, or beef teriyaki with rice for $9, or spaghetti Bolognese for $8. Those ordering hot meals were advised that the food would take an hour to prepare. Pies, sandwiches, cakes, snacks and drinks were also available for immediate purchase. As Australia wandered past there were brief stops at Culcain, Henty and The Rock, and then we sidled into the sizeable town of Wagga Wagga.

Half way between Melbourne and Sydney, ‘Wagga’ as the Australians widely know it, is a pleasant place of 50,000 people and is the state’s largest inland city. Part of its heartbeat no doubt is the Murrumbidgee River, which flows through the town and brings that life-giving water so vital to much of Australia’s continued existence. The city has a substantial history too, having been founded in 1849, and since then becoming known for a list of famous sports and entertainment personalities: cricket captain Mark Taylor; a string of rugby, Aussie rules and rugby league greats; Sam Moran of The Wiggles; and that delightfully ribald character Dame Edna Everage, to name a few.

The surrounding country is magnificent in its vastness, gently rolling swathes of land that vanish into the far distance, with a plenitude of gum-trees left by canny farmers well aware of the importance of shade for stock in a region where sunshine days regularly get past the mid-30 degrees Celsius in summer. Some of the country was also obviously stubble-land, where perhaps only a few months ago crops of wheat or oats or barley had been harvested. It was all immense and hugely wide open.

There were lazy herds of black angus beef cattle and mobs of off-white sheep all languidly snoozing in the midday winter warmth. I was very taken by the boundary fences, separating the farms from roads or the rail line. Many consisted of a concrete post then two waratah standards and then another concrete post, all about five metres apart. Along them was strung 6-inch netting, and there appeared to be no top or bottom wires. These were apparently sheep-proof. Other fences, more likely solely for cattle, were simply waratah standards every few metres, strung with four or five wires, and sometimes with the top two as barbed-wire. The fences, sometimes 400 to 500 metres in length or even longer, were anchored at either end with a hefty concrete strainer-post and stay. No-one seemed to be using electric fences anywhere. It was all rather different from the usual post-and-batten fences seen on farm boundaries in much of New Zealand, or the somewhat seemingly flimsy two-wire electric fences with slender standards every 10 metres or so.

As a King Country farm lad, I’ve often wondered what it would be like, working that sort of country, and whether I could tackle the size of it, the harshness of it, and all the little side issues that I presume are just second nature to Aussie farmers. I’m thinking of snakes and spiders and ants and other unfriendlies; and the never-ending worry of bushfires; and the prolonged, searing dryness that hammers the land so regularly; and how the women cope with the isolation and solitude of it all; and how they must worry about letting their children go outside to play … amongst all the snakes and spiders and ants and other unfriendlies. Yet every year thousands of Aussie country kids grow up in those environments happy and laughing and healthy and full of vitality, and sometimes having narrow scrapes or broken bones or other injuries. Occasionally there is tragedy.

And I guess kids do exactly the same in this country. I know we did, half a century ago – playing in drains, climbing trees, puddling about in tiny boats or on surf boards along the edges of yawning oceans, swimming in rivers. Here too there is occasional tragedy. It’s the reality of life, I suppose, and it has happened like that from time immemorial. We simply get used to handling things in our own back yards.

So our train trundled on; and the lady one seat back and on the other side of the aisle, who had been talking to a cornered Thai student non-stop since we left Melbourne at 8.30 that morning, was still giving him advice and her opinion on an ever-expanding range of topics, whether he wanted it or not. I noticed that his need to excuse himself and head for the toilet became more and more frequent, as he desperately sought to gain a few fragments of peace and quiet.
We’d stopped at ‘Wagga’ at 1.05pm, and half an hour after we continued the journey there was a general announcement that the buffet car ovens were not working properly, and those who had ordered hot meals may have to wait another 30 minutes. Several people simply got up, went to the buffet car and bought another couple of cans of beer, to fill the gap, as it were.

The country through this southern NSW region is wide open, expansive, big in a way most Kiwis can’t comprehend. Away out beyond Wagga we stopped for 10 minutes just before Junee. We parked in a siding, obviously used for loading and unloading all manner of agricultural equipment, grain and material. There were sheds and loading ramps and grain tanks and big open yard areas, along with an assortment of trucks. While we waited I watched and admired the skill of a heavy-vehicle driver as he hoisted 30-foot containers into stacks or on to the trays of waiting haulage trucks. He had his massive pick-up machine working like a ladies’ wrist-watch, so delicate and precise was he in manoeuvring the hefty containers into exactly the right position. We were waiting for the Sydney-Melbourne XPT to come through – there’s only one track, and one or other train needs to park up while the other, going in the opposite direction, barrels through. The Melbourne-bound version did too, without warning, and its carriages were suddenly blurring past my window at about 100 km/h less than a metre away.

We moved on, through mystical-sounding Cootamundra, Yass Junction, Bundanoon and Moss Vale, the country changing as we did so from broad open farmland to eucalypt forest as the line worked its way through and over the southern end of the Blue Mountains. Around Yass Junction there had been more big wide country, with broad flats cradled between rolling hills. There was lots of bush, and lots of well-filled farm dams, lots of good-conditioned stock and expansive groves of wattle all starting to colour up with masses of yellowing buds.

It was such attractive country – at least at the moment. We were there in July, and maybe there had been some autumn/winter rain, giving the land a good greening. It had been even greener and more lush around Cootamundra, but the Yass Junction country seemed somehow better-looking, with its open paddocks and the liberal sprinkling of big, old-man spreading silver gums way out in the paddocks. Occasionally a long-dead tree stood stark and skeletal, leafless branches pointing in vain accusation at a cloudless sky.

By 4.30pm, still more than three hours from our Darling Harbour hotel in central Sydney, long dark shadows began crawling across the land as the sun dropped sharply towards a darkening horizon of faraway hills. Stock were on their feet and feeding with late-afternoon urgency, seeking full bellies in readiness for what was going to be a chilly inland night.

Through Bundanoon and Moss Vale the crumbling ruins of old homes and sheds and fences stared back at us as we slid past uncaring. Maybe this land had been settled by early Europeans in the mid- to late-1800s, and the world had simply kept turning remorselessly round and around, not caring that they had lost the battle. Nothing lasts forever.

Rolling down the seaward side of the high country, the train now running almost silently on the easing gradient, it all sounded like the gentle hissing of a great jet plane as it begins its descent before coming in to land. But Madam Mobility-Mouth kept at it ceaselessly. She had talked politics and land use; Aussie habits and customs; finance; travel in Scandinavia and the weather and art galleries and nationwide transport; medical maladies and clothing. The end could not come soon enough for the poor Thai lad, and I wondered idly whether he was thinking of the peace and tranquillity in the next world, or simply losing himself in the Sydney crowds. 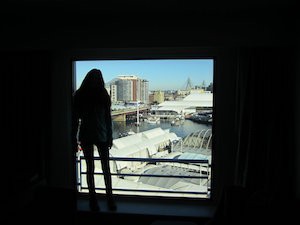 And then quite quickly we were back into urbanisation, with houses, industries, roads, clanging railway-crossing lights all sliding past, and the garish neon signs and other hoardings all flaunting the hectic world of commercialism at us with its shallow, unreal, rubbishy promises.
We detrained at Sydney Central, trundled our baggage along a platform, out a side door and loaded ourselves into a cab. Our hotel in Darling Harbour was 10 minutes, $20, away, and it was all a brief blur through city streets until we were there. So neat and tidy.
We reckon travel by train around Australia is great – easy, uncomplicated, comfortable, and a great way to see some good countryside. We’ll do it again.

Kingsley Field has published two volumes of his columns on observations of life and the outdoors. He is currently working on a third. He can be contacted at kingsley@accuwrite.co.nz

Previous Article Broken Blackberry
Next Article Are You Stroke Wise? 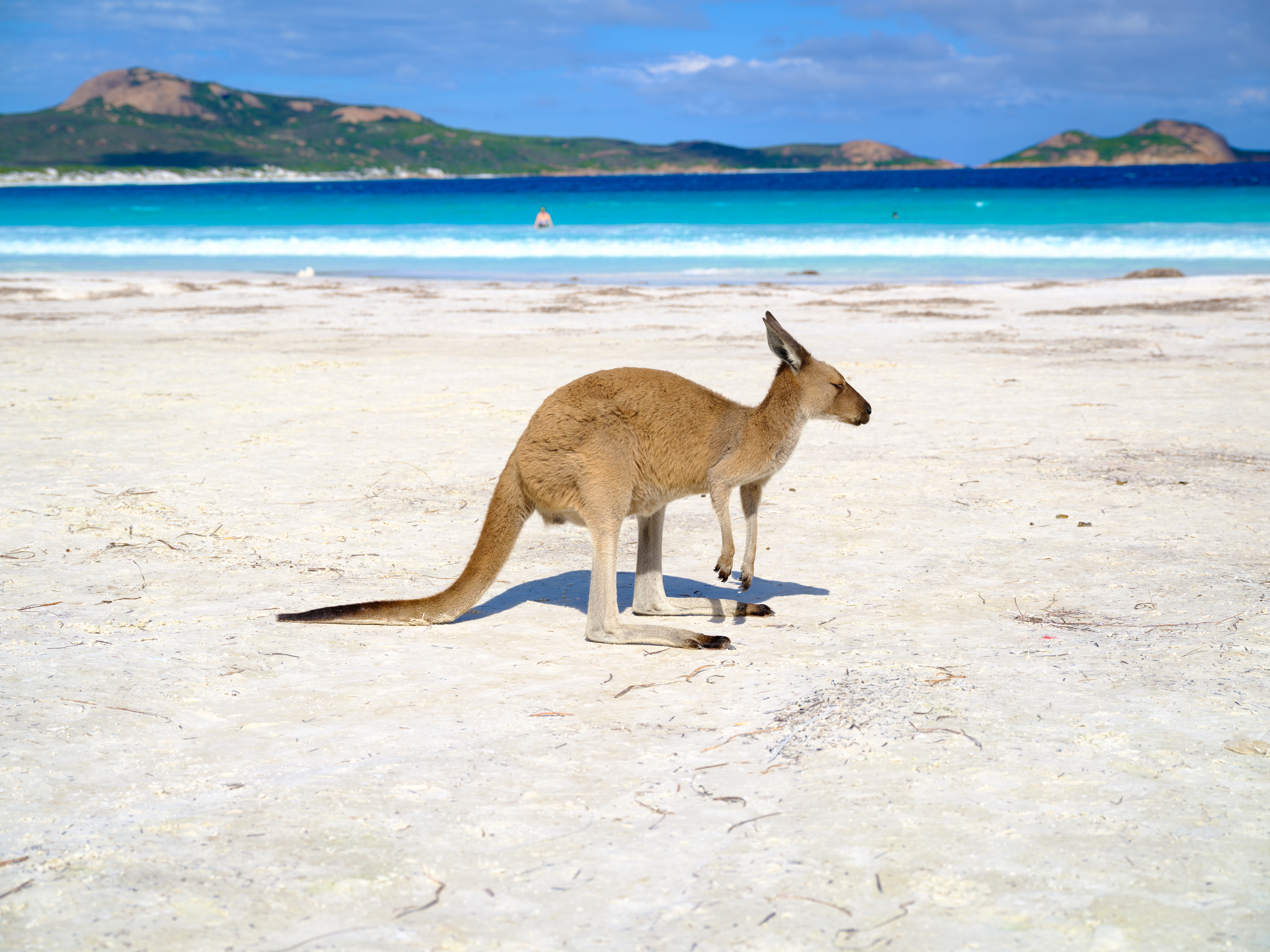 For a limited time GrownUps Holidays are offering an exclusive savings of up to $600 ...