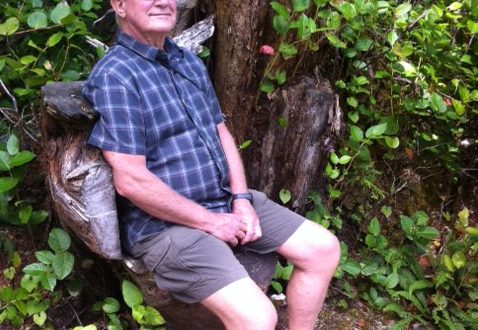 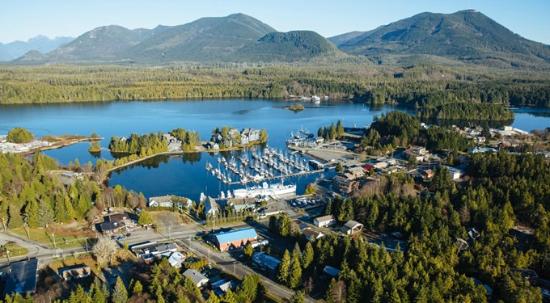 Ucluelet is a small township on the West Coast of Vancouver Island. Although tourism is on the increase it is still a relatively peaceful and relaxed place to stay. Apart from a few souvenir and surfie shops and places to eat in its Main street, I discovered two Op shops and a second-hand bookshop a little further afield which were fun to potter around in.

From here we planned to do some walks. John had done his homework and perused travel guides beforehand to see which ones sounded like us. There was no way we would want to attempt The West Coast Trail which is on the bucket list of many a hiker. It was built in 1907 to facilitate the rescue of shipwrecked survivors along the treacherous Pacific coast and is billed as one of the most gruelling tracks in North America.

“When you see experienced backpackers stagger out of the wilderness, muddy, bedraggled and exhausted, you might think even this is an understatement!” cautioned a Frommers Guide. 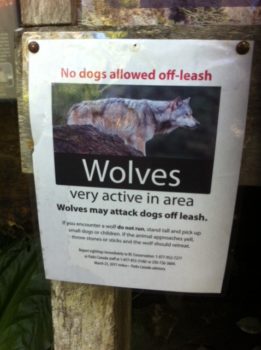 Fortunately, there were many easier trails to walk only a short drive away from Ucluelet. The Lighthouse loop, a one and half hour leisurely hike, which is at the end of the Wild Pacific Trail sounded perfect. Until I spotted the wolf warning at the entrance!

Having so far avoided bears the possibility of a wolf encounter this came as a bit of a nasty surprise!

John assured me (with one of his wicked little grins) that there could also be the occasional mountain lion!

‘No way!” I thought. But once back in New Zealand I googled it and discovered that Vancouver Island is indeed a hot spot for cougars! And although attacks on humans are extremely rare they are more likely to happen here than in any other part of the world.

Shortly after we began our walk a large woolly black creature ran across our path. For a moment I thought it was a bear but it was a large unleashed dog which belonged to a young family. After that, I put any thought of a wildlife encounter to the back of my mind. 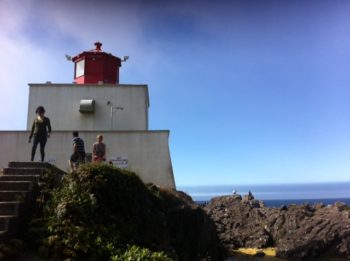 The Lighthouse Loop (2.6 km) turned out to be an enjoyable relaxing walk on a well-kept trail with dramatic views of Barkley Sound. There were so many benches to sit down and take in the ocean view that I lost count. It is known as a good place to spot whales, sea lions, and otters but we were out of luck.

It was a calm sunny day, but the weather here can quickly take a turn for the worse, and in the winter hurricane-force winds and treacherous waves can prevail. Some of the trees had developed a permanent lean as a result of the harsh weather.

Informative signs along the way told of shipwrecks which had happened here in “The graveyard of the Pacific”. The original Amphitrite Lighthouse was built in 1906 to keep ships safe but was itself demolished by a tidal wave, then rebuilt in1915.

That evening we dined at Matterson House, a small renovated historic home which had been painted bright yellow. It was cosy; the service was friendly and the prices reasonable. We just had to try the local seafood!

For an appetiser, John chose a little dish of baked oysters with spinach baked in a creamy sauce. I had a cup of clam chowder. For dinner, he ate halibut and I had skewers of scallops and shrimps both served with vegetables and a gigantic baked potato filled with sour cream, bacon and chopped spring onions which was so filling we passed on dessert.

The following morning we joined a free guided walk at Wickaninnish Beach in the Pacific Rim National Park Reserve to explore the fascinating world which exists where the land meets the sea. 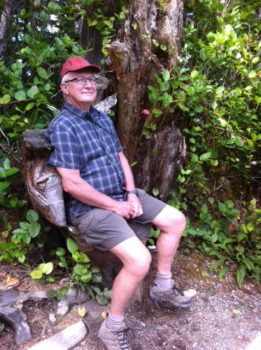 We met our enthusiastic guide Karl at the Kwisitis visitor’s centre where there were great displays about the history of the First Nations people who ventured out to sea in their canoes to catch whales and lived in longhouses.

Our group ranged from those in their seventies to a three-year-old boy. The walk turned out to be tiny, no more than a few hundred metres but it took us an hour to explore this small part of the beach.

Schooner Bay Ocean Beach has a history of shipwrecks and is littered with bleached logs which Karl thought must have fallen off logging rafts.

He took us to see the fresh bear paw prints close to the visitor’s centre and disturbed some bull kelp close by. Out jumped hordes of sand hoppers which the bears come to feed on in the early hours of the morning.

After that, he found sand covered bloodworms for us and dipped his feet into the sea to prove that tiny arachnids will bite. He found holes where razor clams had dug tunnels to keep themselves safe from predators. He showed us patches of sand that looked like spaghetti but were actually worm casts. And he picked up some shed exoskeletons of soft shell crabs and passed them around. 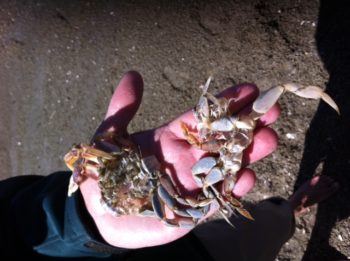 As a result of global warming water temperatures have started to rise here. Small ball crabs have become more prevalent. And this may also be the cause of an increase in the toxic algae which colour the water red.

We were an attentive audience except for the three-year-old who was having a great time tying his parents’ legs together with a long piece of bull kelp. 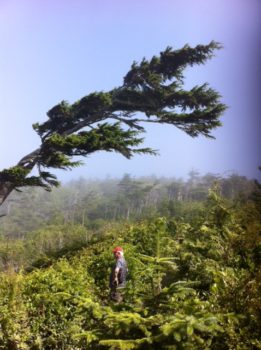 It was amazing to learn just how many creatures inhabit this small part of the beach. We would have been oblivious to them if we hadn’t gone on this interpretive walk.

The day was yet young so we did two further short trails on our own, a short walk to view some ancient cedars (which reminded us of Tane Mahuta back home) followed by the Rocky Bluffs Trail where the cooling ocean breeze brought relief from the heat of the day.

Previous Article Video: The best city to travel to in 2017
Next Article Cracking egg myths 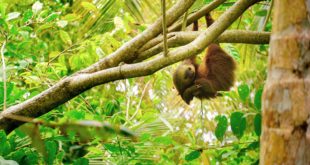