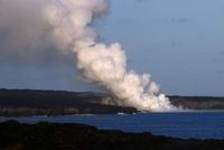 Hawaii's volcanoes are known as "shield" volcanoes, gently sloping mountains produced from a lot of very wet, fast-moving lava flows. Each Hawaiian island is made up of at least one primary volcano.

When you move along the island chain from the south, where volcanoes are active, to the northwest part of the chain, the volcanoes become older–and less active. The active volcanoes erupt a type of rock known as basalt. When in a "molten" state, basalt produces the fluid lava that you see running down mountains and valleys.

The Big Island of Hawaii is home to five major volcanoes: Kilauea, Mauna Loa, Mauna Kea, Hualalai and Kohala. Mauna Loa is considered the largest active volcano on earth, even though it has not erupted since 1984. But Kilauea, home of the Hawaii Vocanoes National Park, is the most active volcano in terms of how much lava it erupts each year, and the place most visitors come to see volcanic action.

Ancient Hawaiians believed that Kilauea was the physical manifestation of the fury of the mountain goddess, Pele. Kilauea has added 550 acres of coastal land since eruptions began in 1983. (To visualize how large this is, imagine that this is enough to fill more than 200 million dump trucks!). Hot rivers of molten orange lava, flowing downhill can be seen most any evening of the year.

Hawaii Vocanoes National Park, two hour's drive from Kona and five hours from Kohala on the Big Island, can be the highlight of any vacation. Open year round, one can explore the many aspects of Kilauea volcano. Much of the best hiking on the Big Island is found within this park. And a visit to the park will give you an up-close view of a volcano.

The Park, open 24 hours a day, is sometimes referred to as the "drive-in" volcano since it can be easily viewed by car. Even if you don't experience lava flows when you visit, there is much to see. Lava craters, giant chasms, vents spewing steam, lava tubes (or caves) and Hawaiian petroglyphs can all be experienced here. The Visitor's Center at the Kilauea Caldera is located at 4,000 feet. Here you can find books, videos and other information about the park.

Crater Rim Drive, which circles the volcano, has many interesting viewpoints and jumping off points for short hikes. Also within the park are the Jagger Museum and the Hawaiian Volcano Observatory. Be sure to bring your camera, water, food and extra clothes, especially if you are staying in the area after sunset.

One can easily spend a day or two exploring Kilauea, so give yourself enough time to really experience the rare phenomenon of a live volcano.

In addition to Kilauea volcano, two other volcanic mountains on the Big Island, Mauna Loa and Mauna Kea are prominent. They stand more than 13,500 feet high and have frequent snowstorms during the winter. Mauna Kea even has year-round snow fields near its pinnacle. Imagine being able to ski in Hawaii!

If your time on the Big Island is short and you would like to take a look at Kilauea volcano, consider a helicopter tour. Since you can't really "see" the mountain from anywhere else on the island, a helicopter tour is a good way to view the volcanic activity. Helicopter tour operators can be found in Hilo and the Kohala resort areas.

When planning your Hawaii adventure, be sure include some time at the amazing Kilauea Volcano, for an "other worldly" view of life on our planet. 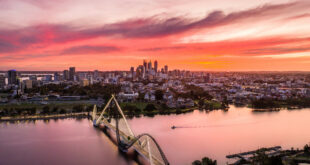