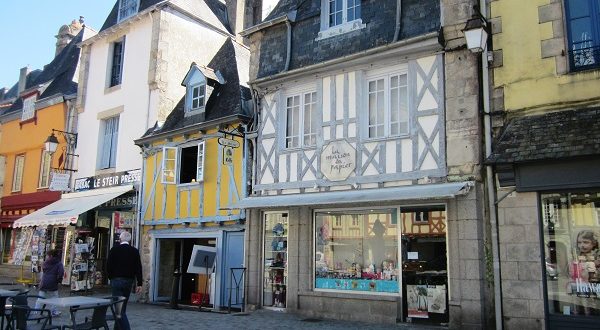 Half timbered houses are a featureo f Brittany.
International Travel

Short days, long nights, chilly mornings – escape them all with a holiday break to undiscovered Brittany (that’s Brittany – not Britain!). While the UK is in chaos over Brexit, and the south of France groans under busloads of tourists; while Venice is too crowded to move, and Spain still hadn’t recovered from EU-driven austerity, the north-west of France just keeps on being its naturally scenic self. Gloriously rural and old-world (expect to spot fox families playing in fields of corn and tractors that look like they’ve come out of a museum), Brittany is the off-the-beaten-track lover’s finest French find.

We decided on a rental car as the best way to get around this delightfully quiet part of the country. Not only are the roads tame and the locals tolerant of tiki-touring tourists, but there are some sizable distances between main centres, and oh-so-many gorgeous little back roads winding down to tiny walled harbours and quaint seaside villages where buses just don’t go.

While larger cities may seem the natural place to base yourself for day trips, we encourage you to embrace Brittany as it really is – rural-at-heart – and book yourself a hotel room in one of the smaller centres such as Gourin just a short drive from forested Landes de Gascogne Regional Park. It’s in small towns like this that you’ll discover quaint Saturday morning markets stocked with spicy sausages and herbed cheeses, and get to know your local baker. The Bretons love chocolate so be sure to sample any of the buttery, choc-filled tarts you spy while buying your pain de campagne (country sough dough bread).

During the day, explore the many little villages dotted around the countryside, all just a few kilometres from each other. Our favourite was Le Faouët with its historic covered market in the centre of the village and Gothic-architecture Sainte-Barbe chapel. While you travel the highways and byways, keep an eye out for the communal stone ovens which were once such a feature of these little hamlets and which now lie overgrown with moss.

A trip to the seaside is a must, and one of the prettiest towns to head for is Vannes where, amongst its stone harbour walls and half-timbered buildings, you are sure to find restaurants serving the famous Breton buckwheat crepes. Hearty wholemeal pancakes, they come topped with a range of savoury and sweet delicacies but one of the most well known is served with eggs and cheese. Wash your repast down with a local cider (and yes, it’s supposed to have that salty taste to it!).

When the small towns and villages have worked their magic, make for one of the larger centres such as Quimpere. Step out along the narrow streets and make your way to La place au Beurre (Butter Square) which was once the area occupied by nobility, and which boasts fine examples of historic architecture. And if you want to get up close to the traditions of Breton culture, pop in to the Breton Museum. There are some marvellous displays of the unusual headdress once worn by local women.

And finally, when you’ve had enough of the quiet life and want a taste of tourism, the famous Mont Saint Michel is just 2.5 hrs drive away. Reached by a causeway, the church-on-an island’s world fame will ensure you have all the company you want, but is still a must see while you’re in one of the loveliest regions of France.