Leaving the airport I fall deep into the rear seat of Amansara’s chariot, a restored 1950’s Mercedes. I haven’t even reached the hotel and already the royal treatment has begun. A cold face cloth is offered to cool my forehead, but I prefer inhaling its refreshing lemongrass scent, something my nostrils become welcomingly familiar with during my stay.

The car indiscreetly swings through the fractured streets otherwise frequented by bikes of pedal and motorised variety. Quite a contrast to the Mercedes, Amansara is understated in its presence and I barely realise that we have rolled off the streets and into the driveway. The resort’s General Manager Siddharth Mehra is there to open the car door even before the wheels have stopped rolling.

With the enthusiasm of a court jester and disposition of a monarch, Siddharth sets the expectations high right from the outset.

Villa Apsara was originally built in 1962 for King Sihanouk. Since then stately guests, rebel coups and military occupations all preceded the Aman resort group purchasing the 12 suite property in 2002. I’m shown to room number 20, one of the additional 12 pool suites built in 2006. The steamed spring rolls and freshly-squeezed lemon juice are a sufficient teaser to consume while browsing through my personalised itinerary – evidence that Amansara has the subtleties to enhance its ‘wow’ factor.

Amansara’s suites are residential tranquillity. Earthy interior wall colours are carried beyond the floor-to-ceiling glass and to the outside courtyard, where a trickling water garden enhances the adjacent pool’s serenity. It’s not hard for my wife and I to transition into relaxation mode especially with no television. A sprinkling of books provides a sample of what can be found in the resort’s library.

Early morning starts are common in Siem Reap. As daunting as a 5am wake-up may seem while on holiday, Amansara delivers an early morning enticement – fresh fruit salad, yoghurt, pastries and, most importantly, coffee. In addition to temple toppling, Amansara has an entire list of exploration tours. These range from learning the art of Khmer cooking to visiting Sangkheum, a voluntary centre improving the lives of neglected children partially through the support of local business like Amansara.

After a morning adventure we return to Amansara as the rampant humidity kicks in. This is when the resort‘s option of three pools comes to the fore. I bypass the main and lap pools for a dunk in our secluded villa pool. Of course, a day of such vigorous exercise only enhances one’s appetite.

Amansara’s circular restaurant has the atmosphere of a family home – it just also happens to have 7-metre high ceilings accentuated by coliseum-style rock pillars (doesn’t every home?). Servers greet on a first name basis from the outset, offering the two dinner menus – one featuring Khmer dishes and the other a three-course western meal. Local and international options are also offered with breakfast and lunch menus. After sampling Chef Jonathan Phillips’s amok trei (fish curry), chicken and banana blossom salad, and Khmer omelette with roasted duck, there is no competition – the local menu wins hands down.

Beyond the complementary house wine, Amansara’s wine menu is overflowing with a sophisticated collision of old and new world grape varieties, including a Marlborough sauvignon blanc from Seresin. In the early evening, the wine selection is best sampled from the terrace rooftop with an accompaniment of home made cake or imported cheese from the walk-in cooler. 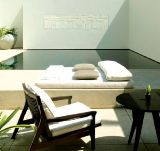 By the final morning the spa seems the appropriate place to complete the Amansara experience. Four large rooms are available for treatments, which include massage from a blind therapist to a women-only ‘Apsara’ steam, scrub, wrap and mask – which by all reports is heavenly. However, my oilfree massage incorporating Thai and Cambodia techniques sufficiently removes any temple-induced aches and returns my body to the royal bliss I felt on arrival at Amansara.

Everything You Need to Know: Amansara, Siem Reap, Cambodia

Ambience / Style: Originally designed by Laurent Mondet in 1962, Villa Apsara was neither French nor Khmer but was said to reflect the modest and modern style of Prince Sihanouk. When redeveloped into Amansara much of this style was retained while utilising a simple palette of materials and Khmer references.

Interesting Facts: Amansara is derived from the words ‘aman’, Sanskrit for peace, and ‘apsara’, the heavenly nymphs of ancient Hindu texts.

Bathroom: Set a step down from the bed platform, double vanities are either side of a deep bath tub for soothing the pains of a day’s trek. A doorway separates the main room, toilet and ceiling, rain-style shower.

Business Needs: Amansara won’t be the place to hold your next staff conference, but the library contains an internetconnected Mac, daily newspapers and importantly if you need to get “work” done, the room is a useful space of peace and quiet.

Spa Facilities: There is something about Cambodia’s Buddhism influence that adds authenticity to Amansara’s spa. Four spacious treatment rooms are available for therapies that draw influences from Cambodia, Thailand and beyond. There may also be guest instructors during your stay, for example yoga classes were available during my time.

Pool: For the energetic there is a 25m lap pool, for the sociable there is an elbow-shaped pool in the centre of the resort and for the romantic there are the private pool suites.

Gym: There’s no gym and for good reason; you’ll get a great work-out walking and climbing among the temples.

Restaurants and Bar Info: The only restaurant offers two menus that change daily. The wine menu has a strong French influence, but there’s also the other necessities of good coffee and a choice of beers. Between meal times help yourself to home-made cakes, cheeses and fruits. A selection of cigars and whiskies are also available in the dining room.

Stuff For Kids: Amansara is definitely bliss for couples, but there is a top 10 list of recommendations for child-friendly fun in Siem Reap.

‘X’-Factor: Staff take the Amansara experience from royal to mythical. ‘Room fairies’ serviced our suite every time we left, ranging from refreshing morning linen to running a warm bath strewn with lotus flowers by day’s end – all without a trace. All staff stopped whatever they were doing to greet us with eye contact and a welcoming smile that many westerners would only reserve for a long-lost friend.

What’s Great: Before you step foot in Amansara, the staff have already prepared an itinerary for your trip. There’s always the top 10 list of Amansara recommendations in Siem Reap, so if you don’t like what is proposed it can be changed – or you don’t have to do anything at all!

What’s Not So Great: The library has a great range of Cambodian books, but it would be good to see more local music among the CD selection.

Overall: Amansara creates an experience among one of the world’s archeological treasures. This is definitely a once-in-a-lifetime experience, my only question is would it be as special on the second or third visit?

Editor’s Tip: Make the effort to adhere to Amansara’s itinerary suggestions and get up at the crack of dawn – you can always sleep the afternoon away.