I hate holiday time. Not because I hate holidays, but because the place fills up with tourists, I can’t get a coffee without queuing up, I can’t get a carpark in the main street, the beaches are littered with hot, sweaty, sunburned people and everyone who comes to visit us stays for the whole bloody weekend instead of just for a glass of wine.

Why? Because we live on Waiheke Island.

(To be fair, exactly the same situation occurred when we lived in Kerikeri – also a popular tourist town – but Kerikeri isn’t an island, so in summer it doesn’t feel quite so much like a pressure cooker whose lid is about to fly off.)

Anyway, I have a solution. I’m encouraging tourists to visit Waiheke now, in the hope that it’ll spread the load, keep the local business people busier and give visitors a taste of the island that we enjoy when there’s nobody else around.

So here’s my personal guide to Waiheke Island in the winter, starting when you lurch off the ferry and find yourself on the wharf at Matiatia.

If you’ve arrived at a civilised hour, your first stop should be the coffee kiosk in the terminal. They make a mean espresso in about two seconds flat, well trained by the endless commuters who wait there, hearts in mouths, to get their morning fix before the bell rings to warn that the departure of the ferry is imminent. Take your coffee and go organise yourself a rental car. They’re cheap as chips over here and yes, you will need it, especially if you hate walking up hills as much as I do.

If you’re staying the weekend (no, not with us, please!) you’ll be spoiled for choice when it comes to accommodation, and you’ll find the winter rates much more appealing than summer. Me, I’d be tossing up between somewhere very stylish in the middle of a vineyard or an olive grove, or a waterfront bach where you can check out how many people aren’t on the beach. (You might see a very nice looking couple with a boxer and a golden retriever mooching along, but we’ll only be half an hour, promise.)

Waiheke’s beaches are legend, and while you possibly won’t want to dip your bodies in the surf when it’s only 15 degrees outside, you will want to walk with the sun on your back, pick up shells and bits of driftwood, and daydream about owning your own beachfront bach one day.

If it’s a really sunny weekend and there are more than two people on the sand at Oneroa, Palm Beach or Onetangi, get adventurous and explore some of the less popular beaches. We have our favourites, which are usually stony and unpopulated. Close to Oneroa Village are Owhanake and Blackpool, where you can wander along the rock pools for ages at low tide, and Man O’ War Bay, a 20 minute drive away.  It’s hard to identify the attraction of Man O’ War. It’s enclosed by headlands and islands, it has an old jetty, there’s heaps of room and the water always looks amazingly clean. Even in winter it’s quite hard not to have at least a paddle.

Waiheke probably has as many cafes as it has beaches, and lots of them are good. But our favourite is a great, barn-like place called Blend, plonked in the most unattractive surroundings you can imagine bordering the Placemakers carpark. Despite its funky, retro décor, it feels like a bit like a converted warehouse, which it may well be. But it’s thoroughly warmed up by good heating, fine coffee, extraordinary caramel and feijoa cake, great big concrete-topped tables where you can spread out the paper, and nice people to serve you. We always go to Blend when we’re on our own but if we have friends along we sometimes take them to Island Thyme, a deli-cum-café where they serve the coffee on aluminium trays with a wee glass of soda water to finish. We love that. The only trouble is it’s difficult to get out without some gourmet treat to which you risk becoming addicted.

If we’ve been walking on Onetangi Beach we often stop at the Beachfront Café. It has a great deck right by the beach and even though we don’t love the red chairs and, in summer, matching red umbrellas, we do love that deck. If the weather’s foul there’s a window alcove inside that’s just for grown-ups, and just recently they’ve added a double sided gas fire. Mmmmm.

Most people who come and stay with us for the whole bloody weekend want to go to a vineyard. Having lived in three of New Zealand’s premiere wine growing regions, we’re over vineyards as entertainment, but we go anyway. We don’t have favourites but we tend to take friends to Cable Bay because despite its upmarket architecture and classy reputation, it’s actually very user friendly even if you’re just wandering about in there with no intention of buying anything. There’s an art gallery which is very cool, and some stunning sculptures outside. We occasionally have a bottle of wine in the bar which is an especially nice, warm space in the winter.

Kennedy Point Vineyard belongs to friends of friends so we’ve been there a couple of times to private functions. We like the winery decks tucked in under the trees where you can relax and try wine, honey and olive oil (not all in the same glass). If you visit after October there’s a fabulous lunch menu that’s innovative and not expensive.

We took friends to The Shed at Te Motu a while ago, not for a wine tasting but for lunch, and it absolutely shone. Both food and wine (fabulous) were pricey but we’d probably happily have paid twice as much just to get the service, which was about a zillion times better than anywhere else we’d been that day. In the interests of accuracy I have to point out that service on Waiheke is not always good. Sometimes it’s terrible. Also in the interests of accuracy I should add that I have (evidently) unrealistically high expectations.

I’m pleased to report, though, that my expectations are always met at the art gallery. Considering I am often disparaging about the artistic endeavours of the minimally trained and talented, it surprises me that I love Waiheke’s community art gallery.

Every time I visit it there’s something that intrigues, impresses or delights me, and I can never get out of the shop there without something in my hot little hand. Fortunately the prices are realistic.

On my most recent visit there were two exhibitions – one based around on Waiheke’s history of flight which attracted exhibits from a wide range of very talented artists, and the other a display of stunning ceramics. There was also a light show installation, and the aforementioned shop where I bought a wall plaque of a charming fat girl in a bikini.

Speaking of fat girls, if you have a need to walk off the indulgences of the day, take some bread and go to the Onetangi Sports Park. Considering my lifelong aversion to sport and exercise it’s a wonder the gates don’t slam shut when they see me coming. But I love the park almost as much as the art gallery. It’s an astonishing facility designed primarily, I suppose, for rugby, soccer, tennis and the like, but it has heaps of gentle walking tracks, mountain bike trails, stands of native bush, a circular lawn with a barbecue area, a pond or two, and a very peculiar course designed for a game called golf frisbee or frisbee golf which I think involves throwing a frisbee into a series of wire baskets dotted around the park. I’ve never walked the whole course because some of the baskets are up hills, but I do walk all the flat bits virtually every day.

My favourite part, though, is the colony of chooks that lives at the gate. That’s why you need the bread. If you’re stopping to feed them and you’re tempted to take one home, please don’t take the lavender-coloured one with the topknot. I’ve got him on hold.

In search of Katherine Mansfield

Whats it like to retire to Waiheke? I live currently in Auckland City suburbs and have kids nearby – I need to move somewhere in a 3-5 yrs time to retire to and wondered about Waiheke……any feedback welcome…..(I paint too in my spare time)

We lived on Waiheke, back in the 1970s when it was the undiscovered jewel of the Hauraki Gulf. Life was leisurely, land was dirt-cheap, it was beautiful and unspoiled, the habitat of fun, quirky, talented people, and eccentrics too, happily accepted within the community.
We bought our dear little cottage nestled in bush for a staggering $15,000, but eventually sold it and moved on to another quiet, unspoiled area, the Kapiti coast, and another cheap house three minutes’ walk from the beach. Once again we sold up (for a modest profit) and moved overseas. We often remind ourselves that if we had hung on to those properties and sold them now, we’d be very rich! But we wouldn’t want to live on Waiheke now, even if we could afford it. It’s changed almost out of recognition — so has Kapiti. We’re still keeping an eye out for another undiscovered gem to put down our final roots…but now the world has invaded even the sleepiest parts of New Zealand, I fear that this may never happen. Meantime, we’re working on creating our own little paradise, right where we happen to be. 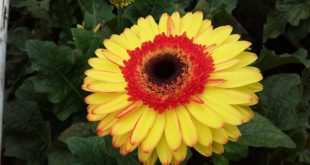 In environmentally conscious circles, cut flowers have become a bit of a no-no in recent ...