Coastal south-east Otago is littered with tiny seaside settlements, and one of the best (and least visited) for scenery, history and holidaying, is Taieri Mouth. Hugging both the white sandy beach the area is well known for, and also the amber waters of the Taieri River, the hamlet is just a 40 minute coastal drive south of Dunedin. An alternative route to Taieri Mouth is to branch off State Highway 1 at Lake Waihola, and drive the 12 kilometres east ‘over the hill’ (as the locals like to say), using a sealed road that is popular with cyclists. Those who wish to arrive at Taieri Mouth on foot, can enjoy walking there via the Taieri River Track which meanders up and down hills through the gorge, taking in several different types of native and introduced vegetation on the way.

A low-key and very pretty settlement, Taieri Mouth is perhaps best known for its historic and environmentally important Moturata (or Taieri) Island. The island is the site of a Southern rata restoration programme which has been over 10 years in development. The task of planting on the island has been made more difficult due to low-tide foot access being periodically interrupted because of the mouth’s notorious sandbar becoming impassable, and the changing position of the river’s main channel. The island, which has scenic reserve status, is also home to nesting birds so although it is possible to walk out to it at low tide on occasions, visitors are implored not to step onto the island or to let dogs roam there.

Taieri Mouth divides into three main areas of housing, so it’s important to take your time looking around lest you miss any of the sites. Small, sometimes historic, holiday cottages can be found on low ground at the entrance to the gorge track (keep an eye out for the home selling a wonderful collection of succulents), while on the south side of the bridge, holiday homes cluster avove low cliffs overlooking the river mouth and a small park with a coffee caravan operating in summer (there is no shop or cafe at Taieri Mouth – the closest is at Brighton 17 km north).

Above the park, adjacent to the road, is a historic lookout with an interpretation panel giving interesting details of the settlement’s past. The island was once fortified and occupied by Maori inhabitants, while from 1839-1844, a whaling station operated out of Taieri Mouth. Later still, the settlement was important as the start of an inland route for boats taking goods up river to the gold mining fields of Central Otago.

Continue further south from the lookout to discover tranquil estuary land with feeding spoonbills and the 3km long Livingston-Green walkway. This informal trail winds its way along the edge of wetland before climbing through regenerating bush, and is perfect for bird lovers – so take your binoculars and camera.

Toilets and picnicking facilities can be found at Livingston park further south of the entrance to the Livingston-Green Walkway while a delightfully old-time camping ground with very good facilities including cabins allows for an overnight stay if you wish to spend longer at ‘The Mouth’.

While I have never stayed in Taieri Mouth, I have visited from time to time. My grand parent and other family members are buried in the cemetery and the owned and there having arrived from Cornwall early 1900’s When my father went to school, the daughter of the engineer who was in charge of the building of the bridge across the Taieri River, she was in his class. that bridge has lasted 100 years and now been replaced. The Taieri mouth is a very rich fishing resource for locals 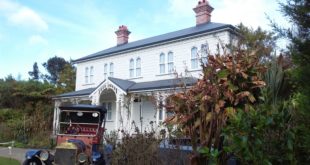 In search of Katherine Mansfield

Who hasn’t heard of ‘The Doll’s House’, the heartbreakingly tender story of two families of ...