In the shoulder seasons of autumn and spring, Napier is a hot spot for canny travellers. The weather is still balmy but the tourists are few and far between, and the footpaths are calm – which means there is plenty of time and space to look up at a snapshot of a city frozen in time. That snapshot was framed in the years 1931-33, a period of intense building which followed the city’s devastating February 3, 1931 earthquake. 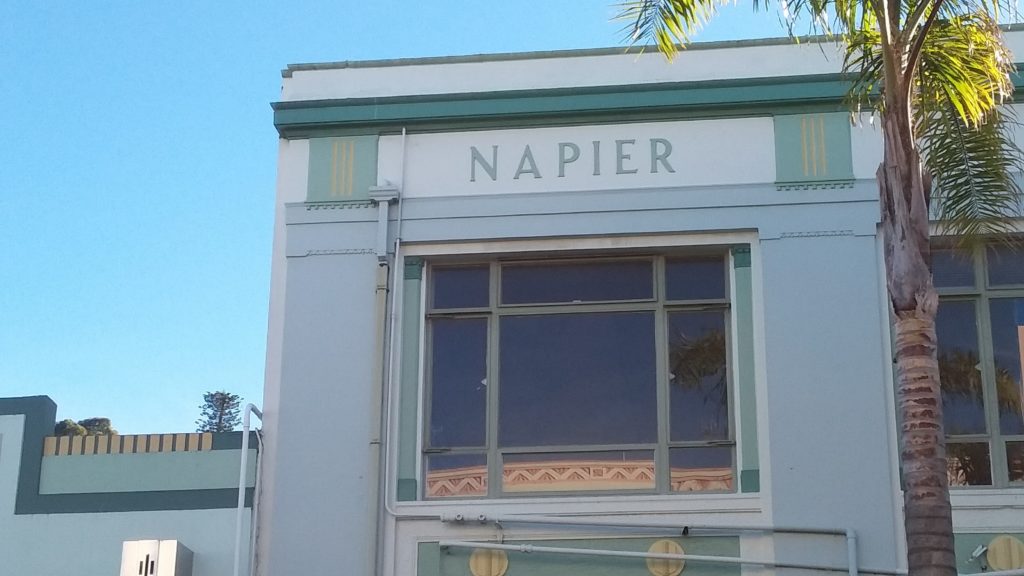 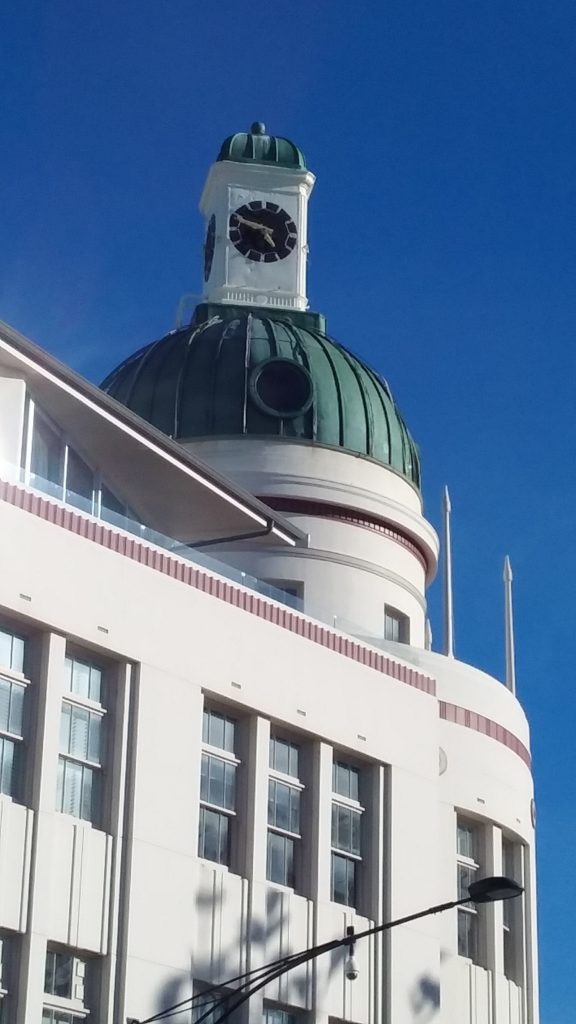 From clothing to furniture, and household objects to architecture, these early 30s years were governed by the era of ‘art deco’. This special design period is epitomised in Napier with its fabulous line-up of public and domestic buildings – and is the reason why so many come to just ‘look’. But what exactly is deco, and how do we recognise it in Napier?

Deco was hovering long before Napier’s rebuild. It originated in France in the first decade of the 20th century but didn’t hit New Zealand until the 1930s. It brought with it the influences of (among other art forms) art nouveau (curved lines inspired by natural objects such as plants and flowers), cubism (two-dimensional geometric shapes) and the classics (columns, colonnades, and capitals – those gorgeous curly-twirly scrolls on the top of columns).

The result is Napier! And you can see it for yourself when you wander along the city’s stunning promenade with its elegant linked columns (a colonnade), or meander down town and look up at the commercial buildings with their ornate cornices (the mouldings over the tops of doorways and where the walls meet the roof) and pilasters (pretend columns which are no more than impressions against a wall and do nothing toward holding up a building!). Notice the domes on top of important public buildings such as banks, and the arched windows of the sumptuous Municipal Theatre.

Don’t be afraid to enter the theatre itself to enquire if you can take a peek into its auditorium, and while you are there, be sure to admire the doors to the women’s and men’s bathrooms. They exhibit not only the clean lines and geometric shapes borrowed from cubism, but also depict the of-the-era male and female characters who simply embody deco! 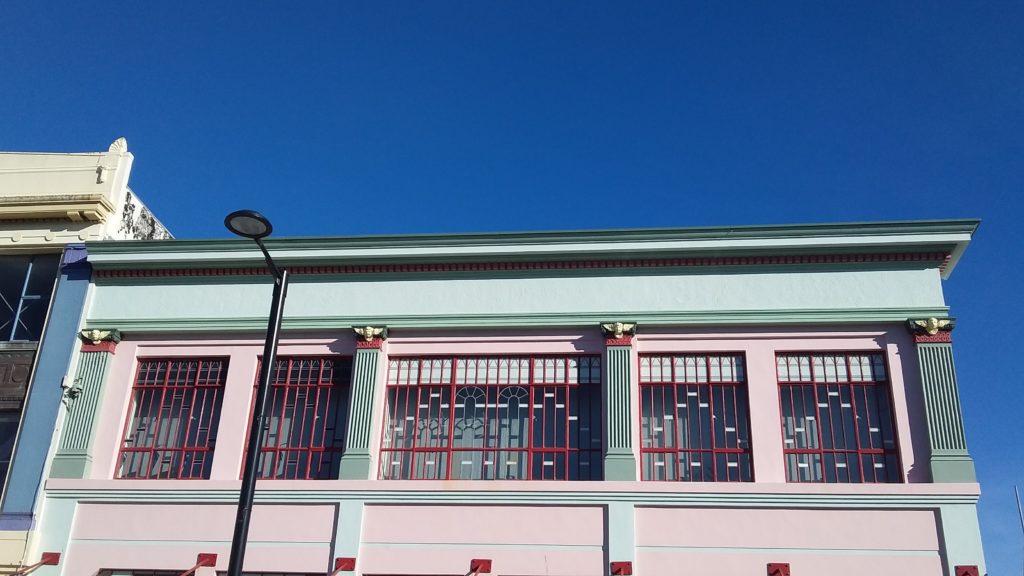 While you’re on your wander, don’t forget to admire the deco plantings that dominate the city’s street. Clean lines are the order of the day with long avenues of palm trees that dare not lean too far to either side, and whose fronds are as symmetrical as the era demands. Thanks to the excellent work of Napier’s grounds people, the spotlessly clean streets below these lofty trees add to the deco sense of orderliness. 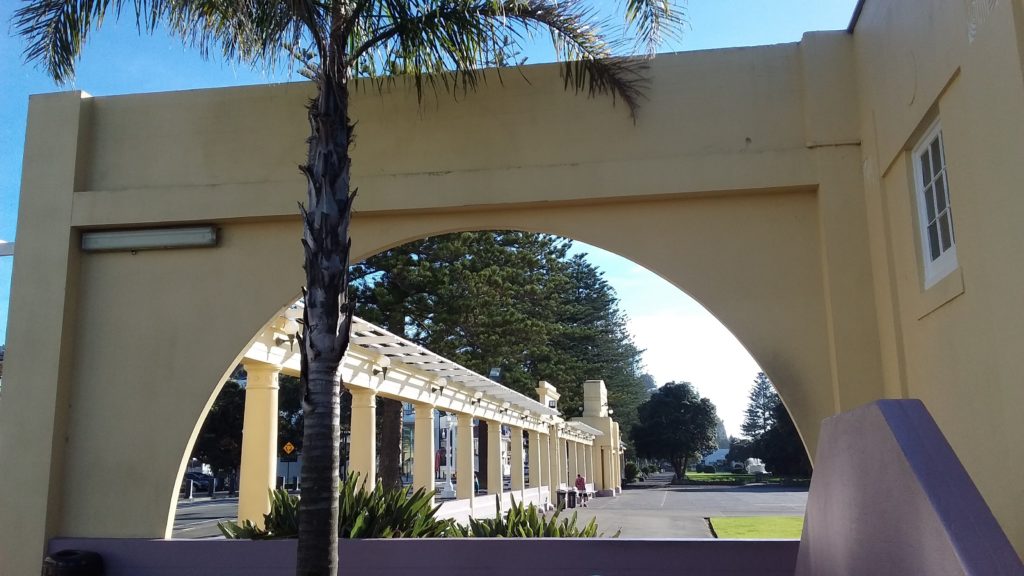 Now that you’re armed with a few words of deco-speak, why not head for this delightful city before inclement weather arrives, or before the heat of summer announces the hoards. Hawke’s Bay, last summer, predicted its largest influx of tourists ever, and the situation can only get worse. There’s no doubt about it; right now is the time to ‘go dabble in deco’!

PS If you want to gaze with the crowds, Napier hosts an art deco festival in February.