As dogs age their behaviour can change. Learn more about what to expect and what you should do.
Pets

Your dog has been your faithful companion for years, more than a decade now. And your loving friend has started to become more and more erratic; things that used to not upset them are now causing problems around the house; you may even have problems with them not waiting to go outside, or being more aggressive than you'd seen them in ages.

What's happening is that as your dog ages, a number of age related issues are giving them difficulties in following the rules. Common effects are things like separation anxiety – he'll become anxious when he knows you're about to leave, and when you're gone, he may act out – making noise, making a mess, destroying things. When you come back, he'll be overly excited to see you.

Dealing with separation anxiety starts with being casual about it. Pointing out that you're leaving or coming back only rewards the behaviour. Work on teaching your dog good obedience techniques, like having him do an extended 'stay' command and relax while he's in it. What's happening is that your dog associates you with his pack; and dogs are conditioned to be most comfortable in a pack. When you want to break this behaviour, take short separations, coming back before the dog has gotten anxious, and gives him a treat. For longer departures, give them a treat they have to work to get.

When you're with your dog, take the time to do things that both of you will enjoy – running outdoors is a good one. If you can't come home in the middle of the day to tend to your dog, consider having a minder come in to take them out for some exercise in the dog park.

Another common problem in older dogs is aggression; this, in older dogs, is often a symptom of putting new dogs in the house (and the old dog not wanting to give up their place at the top of the non-human hierarchy), or because of cognitive difficulties. Other things that can cause problems include moving, adding a new family member, and anything that upsets an older dog's routine. Sometimes, putting the dog in some beloved dog clothes can be all that it takes to soothe the savage beast.

A significant number of older dogs experience increased alarm at loud noises. This is often the result of an older dog being unable to manage stress, or cognitive difficulties. Remember that your dog can hear frequencies that you can't. It might be thunderstorms that scare them; it might be something that only they can here. Look for other environmental cues to see what's causing your dog to startle, like a train whistle or traffic noise.

A lot of older dogs will vocalize when they're in a more stressful environment; this is usually whining or howling, and is part and parcel with many of the problems described above. Other signs of doggy stress include a change in sleep patterns, causing them to pace the house, or vocalize. Sometimes, this is because of physical changes in your dog; inflamed bowel, colic, arthritis, and more may make it hard for them to sleep for an extended period of time.

How to Care for Your Pet’s Teeth

Yes – Cats Can Get Depressed!

Walkies (with your cat!)

Can Cats Learn Tricks? You Bet!

I enjoyed reading this article by Kelly Perry. i can recognise some of the issues she is writing about in my 10 yr old dog. He becomes quite anxious when we are getting ready to go out, barking and jumping around.
He is a big dog so this can be quite difficult leaving the house.
We have try to be more organised now and this makes a big difference. Also we leave him for short breaks and then come back and he seems to accept this better. 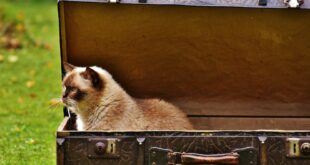 Pet Talk – how to cushion the ride for your feline friend

They’re our ‘babies’ and our besties –  welcome to the first in a new series of articles on pets, the buddies we wouldn’t be without! Whether it’s transporting your cat to the vet, a cattery or the bach, here are some tips to make their journey safer and much less daunting.