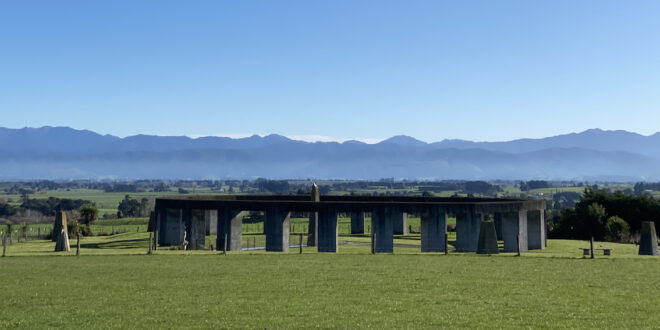 Interests, Our People, Our Country

Aotearoa Stonehenge – our ‘prehistoric monument’ down under

Stonehenge is a famous European prehistoric monument. It’s by far the most famous of its kind in the United Kingdom, if not the world. Situated on the Salisbury Plain, 96 kilometres from London, it was built around 5,000 years ago, in several stages.

Stonehenge UK began life as a circular ditch – a burial site surrounded by a bank on which the spoil (dirt) dug from the ditch, was piled. Over a period of time, huge stones, brought from over 240 kilometres away, were erected in a circle inside the space enclosed by the ditch. Eventually, more massive stones (4 metres high, and weighing around 25 tons) were set in place to form a second, huge circle. This second circle of standing stones was capped with gigantic stone lintels.

In the 1960’s, there was much speculation Stonehenge may have been an ancient astronomical observatory, a kind of ‘living calendar’. However, although Stonehenge in the United Kingdom does appear to hold significance in terms of sunrises and sunsets, it’s exact origins remain a mystery to many.

Meanwhile, 18,000 kilometres away, in a field half an hour’s drive south of Masterton, New Zealand boasts a Stonehenge of its own, and this ‘stone circle’ has definite connections with astronomy. In fact, Aotearoa Stonehenge, as it is called, was built over a period of 2 years (2003-2004) by members of the Phoenix Astronomical Society. The society’s members constructed the Southern Hemisphere Stonehenge to help teach anyone who is interested, about astronomy, ancient and modern, and about the astronomical world of the Māori.

Officially called ‘Stonehenge Aotearoa’, the structure is similar in size to its ancient cousin in the UK, but isn’t an exact replica. What appears to be it’s 24 standing stones, are actually hollow 3 metre tall pillars that have been covered in concrete. The lintel cap sitting on top of the ‘stones’ links the structure together, and the entire build takes into account the strength required to hold it steady in what is an earthquake-prone region.

The structure includes an entranceway to the ‘stone circle’ flanked on each side by two carved pillars. They form the ‘Sun Gate’, and between them, the sun can be seen rising at the dawn of the spring and autumn equinoxes. Stonehenge Aotearoa has been carefully planned so its pillars don’t prevent observers of the night sky from seeing the rising of important stars.

As well as its giant circle of standing ‘stones’, Aotearoa Stonehenge boasts several other features. These include a 5 metre high obelisk which marks the middle of the structure, and six ‘heel stones’ which are positioned outside the main circle. The heel stones mark the rising and setting of the sun a various times of the year.

Of course, it wouldn’t be an Aotearoa Stonehenge if there wasn’t a reference to Matariki, the constellation ‘Pleiades’ (also known as the Seven Sisters’) rises in the sky and marks the beginning of Māori new year. A sculpture of 7 female figures to the south of Aotearoa Stonehenge pays homage to this auspicious calendar highlight.

As well as being a remarkable sight in its own right, Aotearoa Stonehenge is also a learning tool, and it is visited, year round, by groups and individuals, including the public, keen to find out more about astronomy. For opening hours and entrance fees, check here.

Although visitors are able to wander around the down under Stonehenge on a self-guided tour, it is also possible to take a guided tour if you call ahead to book. The Phoenix Astronomical Society also offers stargazing experiences.

To find out more about Aotearoa Stonehenge, and the calendar of events it hosts (including musical performances), click here, and be sure to take a virtual tour around the site to whet your appetite for a visit.

The Meta-what? Stay relevant with our easy-as explanation of the metaverse! 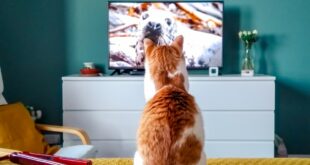 Of all the many genres of entertainment we have available to us, reality TV appears to be one of the most popular. And here’s the thing – we are seemingly unable to give them up, even if we want to.