Within the structure of the family are certain rules that are established that the members are to adhere to. These rules may not always be sensible, but nonetheless become a part of how the family operates. They are generally known, whether or not they always be followed. It is dependent on who is in control and what the consequences are for violation whether the family members adhere to the established rules of conducting themselves. 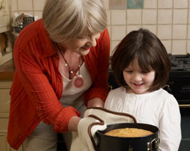 Children have moments of looking at themselves apart from the established structure. This becomes more pronounced in the teen years. This can become a major source of contention inwardly where the child sees himself in a way that may not meet to the approval of the family structure. The structure where authoritarianism reigns may shun the thought and creative expression of the child leading to repression of independent thought and action. The child is expected to do those things which protect and preserve the family structure. The structure may be faulty, but nonetheless it is maintained, at times violently so. Being a deviant from the structure can have dire consequences for the child, from within the family structure itself and as a result of the energies wasted in a struggle to change something where they have not been empowered to evoke change. They are left only to comply. Their unhappiness and discontent will be ignored to preserve the 'integrity of the family structure."

Often there exists the situation of self fulfilling prophecies within certain structures. What one hears they unfortunately become. If a child is told that he is a certain way, and this becomes a repetitive message, it is likely he will behave in like fashion. The child may repeat the very language he hears, not necessarily knowing its meaning, but knowing it conveys a feeling and can be used as a defence.

There exists at times in families, one who will do all possible to preserve the structure, no matter how dysfunctional it may be. This person often utilizes an authoritarian stance and expects their children to respect them solely for the sake of their presumed authority. Their objective is control, and the independent or creative nature of the child is looked upon as a deficit. The child's only voice is to be the parental voice, if it is not, punishment will certainly come. This person is many times a person who implies the idea of 'do as I say" but not necessarily as they do. This creates despair in the child, leading to states of hopelessness and depression. They may begin to question their sense of self, their own identity. They become anxious, fearful children who appear timid because they dare not speak something which could bring them punishment from the authority in charge of the structure. This learned behaviour begins to manifest outside the family structure as well, as these are the children who then become easily swayed by peer influence. These are the children who do not really know themselves so they adopt the traits of those around them, seeking to gain acceptance and a sense of belonging. They are thus always victims of control. Once they branch out from the control of the authoritarian parent, they are bound to be controlled by some other party who will influence their decisions and deprive them of critical thought. They may not realize they are being controlled, thinking they are somehow apart because they belong to a 'clan' who dresses this different way or that, but nonetheless they are under the control of something or someone. These children are usually the underachievers. They are not sure of what to strive for, thus they often do not strive at all. They allow life to merely 'happen' rather than taking charge themselves.

The over achiever is one bound by feelings of inadequacy and this often takes its roots in the familial structure. It is often in these situations where there exists a force within the family who has defined the rule of what it means to be 'successful'. There is the constant pressure and drive to have the child to conform to expectations. Those with this structure in place highly value competitiveness. The siblings are often competing for attention for one another. It is often the only child or the firstborn who is placed in the glorified role. If they meet the expectation, they are heaped with praise, if they do not, they are likely to be cast aside. Once cast aside, or in the worst case, cut off from the family, they often enter into depressed states. They may seek various avenues to mask their feelings of inadequacy. These feelings of inadequacy may impair their future relationships. They may become those always striving for an unreachable ideal, always slightly out of reach. They cannot fully accept themselves in the present moment, but always want to be gaining or achieving more. They become individuals whose level of dissatisfaction can become immense.