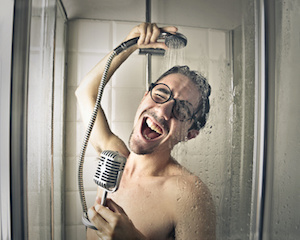 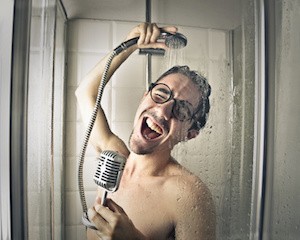 There I was at twelve years old being told by the music teacher at my school that I had to drop out of the school choir. “But why, says I?” “Because,” says she, “your voice has broken and you can no longer sing in tune!” She was right, but all I heard was that I couldn’t sing! Her view was, unfortunately, confirmed by others during that strange adolescence time. To avoid any more negative feedback about my singing than I absolutely had to endure, I confined my singing to the shower with the water turned up as high as possible.

Sound familiar? So many of us have been told numerous times that we just can’t sing. Sometimes the feedback is a little brutal too. It isn’t long before we internalise the message and come to believe that it is true. As time passes those who “can sing” get better at it, while the rest of us refrain from improving our vocal chords. The gap grows and we “know” we can’t sing.

The problem is that singing is a great way to express ourselves. It is like giving voice to our souls. Shutting off this avenue to a feeling of well-being is sad.

About five years ago I was looking through the local paper for adult education offerings in the area. One workshop heading caught my immediate attention: a one day workshop titled Singing for Non-Singers. That’s me! I felt it right in my gut. The feeling was mixed, partly excitement and partly fear. The excitement was about the possibility of recovering my singing voice and the fear was that I may not really be able to sing or at the very least that it would be very difficult to do so. One thing I knew, with such strong feeling responses I couldn’t just ignore them. I nervously signed up for the workshop.

When I arrived that Saturday morning I found about forty other people sitting there quietly. The instructor arrived and started the workshop by asking each of us to say why we didn’t think we could sing. The stories poured out, many similar to mine. Early in life negative feedback, peer group jesting, partners who did sing well which inhibited themselves from participating, and so forth. She put all the stories on a black board, turned it around so it was no longer part of our environment, and then said that everyone who has vocal chords can sing. All it requires is learning basic harmony, finding your vocal level, practicing to get on pitch, and enjoying.

That’s exactly what we did that day. In short order she had us harmonising on some simple but beautiful pieces. After lunch time she had us working one-on-one with her, singing in small groups, and trying out some more complex choir pieces. By the end of the day most everyone levitated out of the room, having such positive feelings about the experience and, more important, about the knowledge that they really could sing.

I went out and bought some sing along CDs so I wouldn’t stop singing. That was great, for a while, but I soon found myself missing the chance to sing with others. I checked around and found a local group that met one evening most every week to sing together, learn new songs and perform publicly together occasionally. Surprisingly, they accepted me! I later learned that finding males with bass voices was difficult, which probably explains why they took me in.

I stayed with the group for about three years, learning lots of great music, meeting interesting people and improving my singing voice. I left when it began to feel more like work than fun. Contributing to this feeling was the fact that my knees complained more and more because the group practiced standing up and the requests for performances increased which meant that I was putting in a lot more time than I wanted to learning new music for these performances.

It was the right thing to do for my body and for my stress level, but I dearly miss being part of the group. I found my singing voice during those years and I discovered that singing is indeed a powerful way of tapping into the soul. I now know that I can sing and I continue to do so publicly whenever the opportunity arises (as well as regularly singing in the shower!). In fact I have joined a community choir that is more relaxed about attendance and having to learn new music. It’s great.

I’ll never forget sitting in that room with forty other “non singers” who took the risk to reclaim their singing voices. I, for one, know that if I hadn’t done so, I would have missed the chance to rediscover that I can indeed sing and, with that knowledge, I have been able to express my singing voice and get more in touch with my soul.

Are you a “non singer?” If so, don’t believe it! Go for it and live more fully. Of course, the same is true of other “non’s” in our life,. Choose your “can’ts:” You can’t do math or you can’t run a good meeting or you can’t fix plumbing and electrical problems. The list is endless and it is self-defeating. If we listen to the feedback we cut ourselves off from many interesting and positive life experiences.

I’ve been told that I can’t dance. That’s my next big challenge. I’m going for it!

Mike is the author of Resilient Aging: Making the Most of Your Older Years.
Like this article? Share & Connect Now!
Advertisement

Did you know good car maintenance benefits both your pocket and your safety?

Does gardening count as exercise – you bet!

A good rule of thumb is that if you should sing gently.If asked,you can always lift your voice,if asked. Look after your throat by letting your voice do it’s proper job. That means looking after your throat-so no trying to hit the high notes unless they are in your range. We aren’t all of us Joan Sutherland! The same with songs needing a very deep voice-like “Old man River”
Be content not to be “The star” That may not be your role. Someone has to sell the tickets to the concert, be in the audience,be in the kitchen doing the refreshments(including doing dishes/loading the dishwasher),raising funds for choir trips etc. Without reliable helpers many a group would fail. Doing these things is not about accepting second-best but finding your role in the whole.

I love music especially the Opera, choral, and Irish folk songs and the Great composers. I am tone deaf as well as plain deaf so can’t hold a tune. Yet I do sing to myself and it is the old hymns from my church days that come most to mind. Sister Margaret Mary took our class for singing and I still remember some of the songs, but the Latin tunes still pop out sometimes. One day at singing, Sister said to me, “are you singing Joy”? “yes sister” I answered enthusiastically. “I need you to come and turn the pages of my music dear”. Never ever felt that I was being got at.

Mike,let us now how you get on with the dancing. I would like to try that one too,as I have two left feet!

Singing is good for you internally and who sings -spiritually as well as physically Action songs are fun.It helps if you can do some or all of your singing in private though.It is also a good idea not to sing loudly unless you are absolutely sure of being alone. Sing whatever is your favourite, release that song that you can’t get out of your head.
What fun it would be to go to a non-singers group.
My mother used to take me with her to choir practice when I was a child,as it was easier for her than getting a babysitter.For me personally, it couldn’t have been better.Participating, belonging and singing my little heart out!You learn things along the way,in my case things like”Hiawatha’s wedding Feast’and some really and truly ancient Christmas carols and the better known ones too.There was the bonus of learning some bits of Latin along the way too.
Where are these non-singers groups?If there is one in my area ,I would like to join. 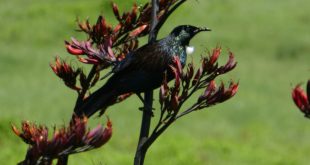 6 tips to boost your bird watching!

Backyard bird watching is one of the most popular hobbies in the world, but if ...