6569 ZZ AT THE BEEHIVE
Entertainment

I have just spent a week — or should that be weak? — on the road, keeping pretty exalted company. There was Mark Ellis, multi-sport champion Steve Gurney, television talking heads Sean Summerfield and Geoff Bryant, former Formula One driver Chris Amon, glamorous top-flight rally driver Emma Gilmour, Eoin Young who is probably the most widest read New Zealander in the history of the written word and 200 or so others.

It was the bi-annual AA Energywise Rally where the object of the exercise is to see how far you can make your car go on a tank-full of fuel.

In the days before labels were important, these events were simply called “economy runs”, but because the world was in its Big Car phase, nobody really cared how much fuel a car used and the events became unfashionable and irrelevant.

But the 21st century has seen them take on fresh importance as oil prices increase and we now all accept there will come a day when there is no more and so they have been reintroduced and given a sexy new name. But possibly a misleading name as “rally” suggests speed and excitement and when I checked into a hotel on the event, the receptionist asked “where is the race going to tomorrow?”

When the first of the new Energywise Rallies was staged it was generally accepted, as it always had been, that to get the best results you drove as slowly as you could. The result was that everywhere the competitors went, they were hugging the white line at the edge of the road at 60km/h with huge tailbacks of angry motorists.

Today, the organisers insist on “Real World” driving and they send out three official cars to drive over the route ahead of, in the middle of and at the end the competitors and they take the average time taken by these drivers to establish a time that the rally cars should take — plus or minus a few minutes. If a competitor falls too much behind the “official” time they earn themselves a penalty.

As I have from the beginning of these new generation events, I was behind the wheel of a Mercedes-Benz — an E 250 CDI which means it is a, large luxury car powered by a 2.5 litre turbo-diesel engine, with a price somewhere north of $110,00. 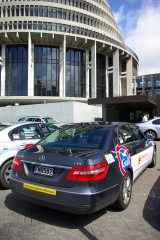 That might make you think “juice guzzler” but the official factory figures, that the government insists are promoted these days, is 6.2 litres per 100 kilometres.

These factory figures from European carmakers are amazingly accurate and it’s a real challenge to match these under Real World conditions — let alone better them.

Japanese and Korean car makers aren’t quite so accurate and it’s easy to improve on the factory figures by five or 10 percent. Well, comparitively easy.

The route covered over 1760km from Auckland to Wellington and back, via some very interesting roads and through some real backwoods towns that many on the event didn’t know existed.

For some this was just a four days drive through the country, listening to music, having a yarn and enjoying the provided meals. But for most, this is a fiercely contested sporting event as bitter and as tough as any Commonwealth Games netball final between New Zealand and Australia.

One regular competitor with a reputation for being “difficult and demanding” on  these events had a new navigator this year with an expectation there would be such tension in the car there’d inevitably be an argument. But the navigator said afterwards — before there can be an argument, first there has to be competition.

In many cars, there was no music, no conversation, just grim concentration.

Many cars these days have an electronic function that allows you constantly monitor the fuel consumption and that’s a great help.

In Mercedes-Benz E 250CDI number 64 there was a slightly more relaxed atmosphere. The Navigator and I listened to the radio — but only once we’d cleared town and got out onto the open road. And we did chat — a lot really.

Because of the insistence for Real World driving conditions and a recommendation to cruise at the legal limit, on Day One I used cruise control and set it to 99km/h. But that night, I had averaged 6.5L/100kms — slightly worse than the factory figure. I would have to try harder.

So, next day I used the fuel consumption read-out device and was chuffed with myself when we checked into final control having averaged 5.6L/100km.

But I had taken too much time and got penalised three percent. Bummer! But in fairness to my own stupidity, the organisers also told you each day, on the instructions, how long each section should take and the average speed!

The Navigator and I discussed this and we thought it had to be there for a reason and so we judged our travel to arrive within seconds of the published suggested time.

But that day, the traffic must have been lighter or something because the average of the three official cars was 10 minutes shorter!

I asked why they bothered giving those figures if they meant nothing and were to be ignored. Nobody had an answer and it was suggested I should lodge a protest. I didn’t.

Next day I over-compensated a bit, arrived early and only averaged 6.0L/100km.

The final day I managed to get both my timing and my fuel consumption right — I hit the finish line with an average that day of 5.2L/100km which made me happy, particularly as we had stopped to have a coffee and a pee on the way, which we thought was real Real World driving conditions.

That’s pretty darned impressive — in old Imperial parlance, that’s about 50 miles to the gallon. Not bad from a large, luxury car and impossible to imagine just a decade ago.

Previous Article Unshakable Oily Rag Resolve
Next Article Paul Henry: Did he self destruct? Or was it calculated?