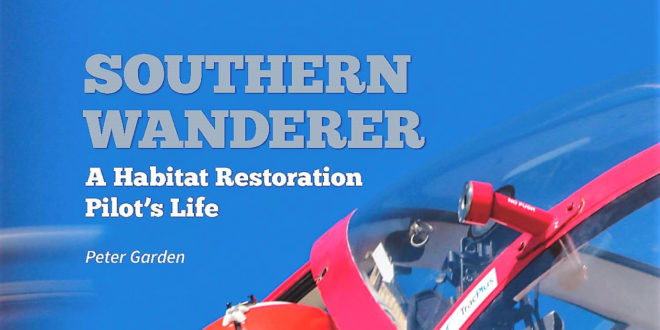 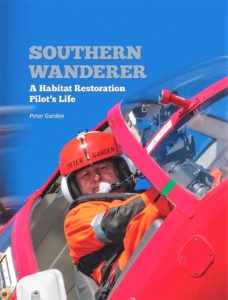 Peter Garden started his flying career as an agricultural pilot in Southland and went on to become one of the world’s pre-eminent pest eradication helicopter pilots and champions.

Southern Wanderer is an account of the many and varied aspects of Peter Garden’s life and the influences that lead to his becoming a world-renowned helicopter pilot and exponent of international and national predator eradication projects.

His early life in rural Southland and Otago provided an outdoor adventure playground on his doorstep. Peter’s enjoyment of roaming began at an early age and the urge to “see what’s over the next ridge” has never diminished. His extensive knowledge of his environment lead to Peter being asked to help with local search and rescue operations while still at high school and this became a lifetime interest.

Deer hunting became Peter’s passion when he was a teenager and was soon combined with four and two-wheeled vehicles. In 1975 a local businessman asked Peter to train as a helicopter pilot and this was his “golden opportunity”. He had taken his first flight at four during a Southland Aero Club post-war aviation promotion. That flight began a passion for aviation and when Peter eventually flew an aircraft himself, he knew for certain the sky was where he wanted to be, and set his heart on a career in aviation.

Peter began flying agricultural operations in New Zealand in 1977 and in Scotland and England in the 1980s. He formed his own helicopter company (Peter Garden Helicopters) in 1985 and began Endangered Species Recovery work 1990.

Peter describes some of the projects that were developed to utilise the unique capabilities of helicopters, all while taking calculated risks, flying in extreme weather conditions, to achieve successful outcomes and improve natural environments for native birds all over the world.

He documents international projects he’s taken part in to restore biodiversity in remote, challenging environments in Alaska, sub-Antarctic South Georgia Island, Puerto Rico and many Pacific locations and describes their associated foreign aviation jurisdictions and government regulations. Thanks to the work of Peter and his team, South Georgia is now free of rats and mice for the first time in 200 years and bird life there has a chance to flourish again.

Through all these exploits Peter weaves the stories of his family and business highs and challenges.

Peter has been Helicopter Safety Counsellor and Chair of the Helicopter Division for the Aviation Industry Association of New Zealand and Chairman of the Steering Committee of the New Zealand Helicopter Association. He has been Aviation Advisor to New Zealand Land Search and Rescue and a founding Trustee of Southern Region Air Ambulance Trust and the Forest Hill Foundation.

In May 2017 Peter was awarded the well-deserved Officer of the New Zealand Order of Merit (ONZM) for services to aviation, conservation and search and rescue.

Peter Garden grew up in Otago and Southland. He took his first flight at four on a Southland Aero Club post-war aviation promotion. He started flying helicopters in the 1970s for live deer recovery and then in agricultural operations in England and Scotland in the 1980s. He formed his own helicopter company in 1985 and began endangered species recovery work.

In 2000 Peter began international habitat restoration (removal of predators) and has been involved in projects in Alaska, South Georgia, Puerto Rico and the Pacific.

Helicoptering is his passion and Peter continues to be involved in conservation and aviation in support roles as an advisor and mentor. He lives in Central Otago. 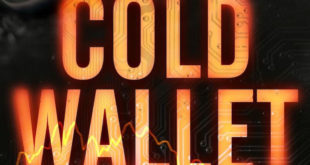 A cryptocurrency thriller set in Auckland, Fiji and Corfu. ‘You have kind eyes,’ the ...