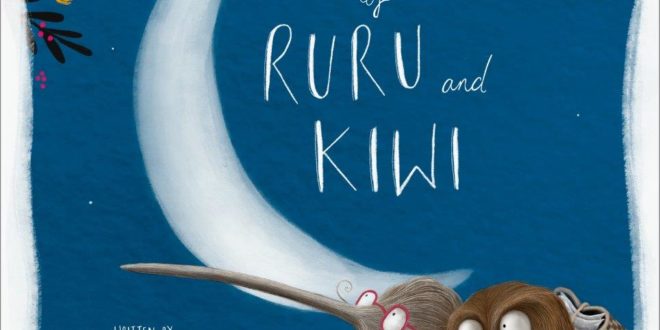 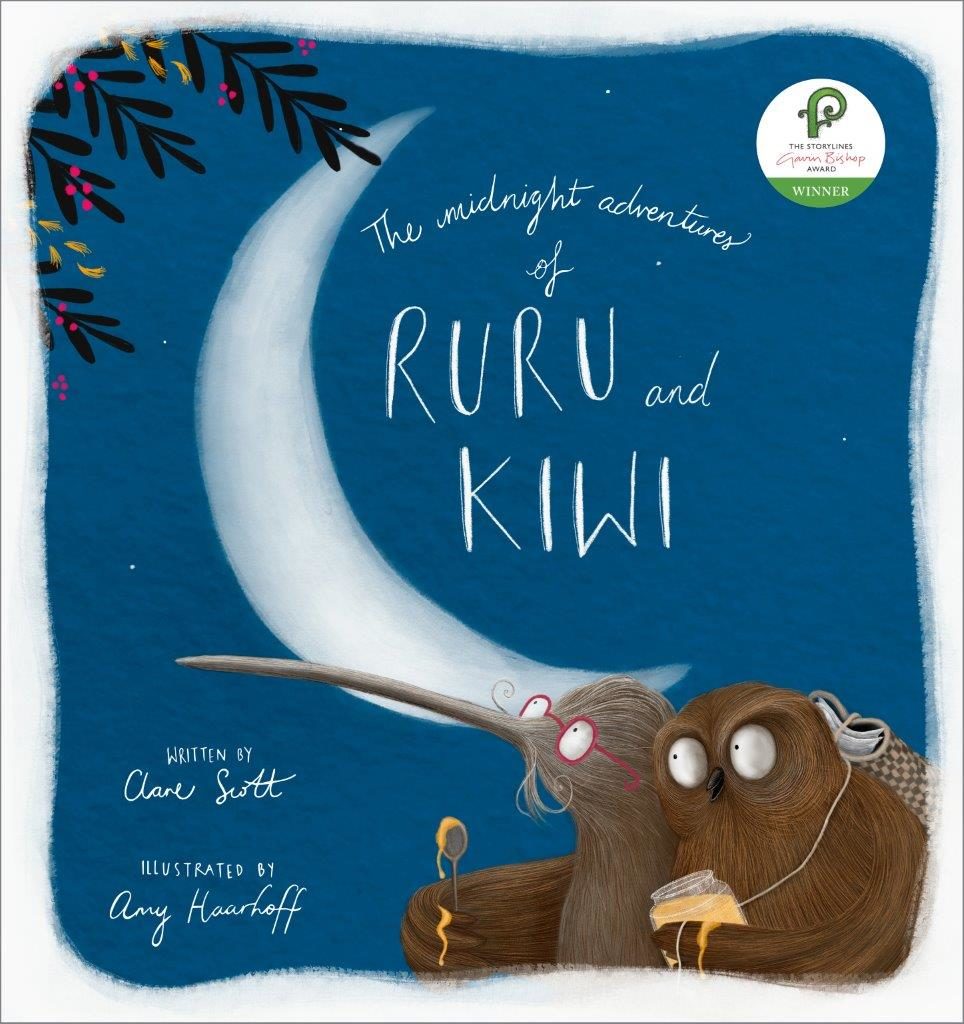 The Midnight Adventures of Ruru and Kiwi, a rhyming story by Clare Scott, is a delightful twist on Edward Lear’s well-known poem The Owl and the Pussycat.

Ruru and Kiwi, two of our native birds, who always sleep during the day and come out at night to hunt, have managed to get hold of a large jar of manuka honey tied up in a flax woven sack (where they got it from, we will never know. Maybe it was mistakenly left behind by a tramper)

The Kiwi looked up

To the sky above

And sang to the tune of the breeze.

We’ll picnic beneath these trees,

We’ll picnic beneath these trees!

The bush was shadowed and still but glow-worms shone bright and silver moonlight slashed down on the treetops and hill. It was the perfect setting for a romantic encounter. The Owl and the Pussycat would have made the most of it. But love was not in the air for these two. Kiwi and Ruru were just good mates.

There was so much honey they could not finish at all. So, they generously decided to share it with their friends and to throw a great party.

They did not have plenty of money plenty wrapped up  in a five-pound note, but everything they needed could be found in the bush.

Ruru, the arty one, created the party decorations by draping rata vines over ponga, flax, nikau and puriri.

And then they went foraging for party food and found a plentiful supply of worms and squirming larvae.

When their friends arrived, it turned into a wonderful party where they all laughed and feasted and danced by the light of the moon.

As well as the story what makes this book special are the beautiful illustrations of the nocturnal creatures as they arrive one by one for the midnight feast in the bush. They were created by Amy Haarhoff, the winner of the Storylines Gavin Bishop Award 2019.

There is a learning opportunity in this book as well. On a double spread at the end of the book are pictures of all the nocturnal creatures including Pepetekatua (native frog). Tuatara, Hara (giant centipede), Wetapunga, Titiwai (glow-worm), Kakapo and more. And under each, a few child-friendly facts have been added.

I think that children 3 years and up would really enjoy this book. They will soon want to join in the rhymes.

The Midnight Adventures of Ruru and Kiwi was written by Clare Scott and was illustrated by Amy Haarhoff. Publisher: Penguin Random House NZ, RRP 19.99.

Previous Article What to do with investments in the slump: Don’t let COVID-19 put you in a panic
Next Article National Lockdown Week 5: A Wartime Story

‘Leading from the Stop’ by Elias Kanaris 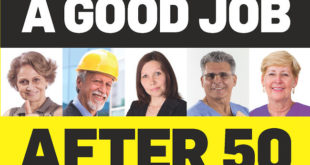