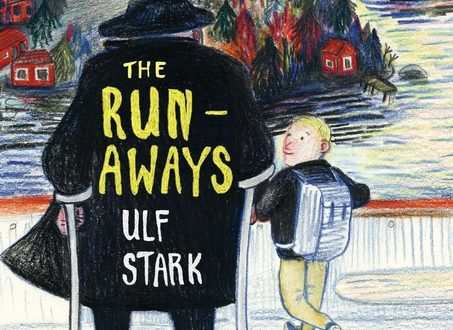 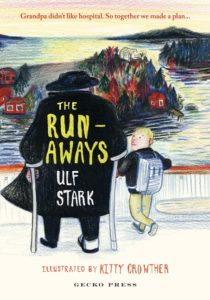 In The Runaways, a new children’s book by Ulf Stark, Grandpa is in hospital behaving very badly and making a thorough nuisance of himself. He incessantly rings his bedside bell, spits out his pills and yells and swears at the nurses.

His son avoids visiting. He feels awful seeing his once strong father lying in his hospital bed wasting away. But his grandson, Gottfried Junior, is not at all fazed by his grandpa’s outbursts. He still loves him very much and worries that he might be feeling lonely. So pretending that he is off to a football practice he sets off to the hospital laden with sandwiches and a bottle of beer, which he sneaked from the fridge at home, so they can have a shared lunch and avoid the awful hospital food.

Grandpa is very unhappy to be cooped up in hospital .What he wants most of all is to go back to his old home one more time. So together they hatch an escape plan. This involves careful planning, spinning a web of lies, and enlisting help from his friend Adam who owns a van.

Gottfried Junior is just a young boy and has no idea just how irresponsible and dangerous it is to remove a terminally sick old man from hospital and take him on such an arduous journey. It includes catching a ferry and climbing a steep path to reach the old home which his grandfather had built.

But they make it and have a wonderful meal together. Grandpa remembers the good times which he and Grandma, whom he misses terribly, shared there. He is delighted to find that the last jar of his favourite lingonberry jam which she had preserved is still in the pantry. After a sleepover he gets up early and sits outside for a while to breathe in the sea air and enjoys looking out over the fjord. He is almost back to his old self.

Gottfried Junior is ever so glad that he has made his grandfather so happy. But as they set off on the return journey he knows that the truth is bound to come out. Sooner or later he will have to face the music. Was it wrong to tell so many lies?

Then as his grandfather’s physical condition deteriorates further in the hospital there are more family dynamics and end of life issues to be faced.

This heart-wrenching story , told with a light touch and illustrated with appealing coloured pencil drawings, is easy enough for a seven year old to read but as it deals with some deep issues it would also make a great starting point for a discussion with older children. Especially those who have a grandparent who is becoming difficult due to chronic pain or grief and/or changes in their brain.

The Runaways was written by Ulf Stark and illustrated by Kitty Crowther. Publisher: Gecko Press. RRP $19.99.