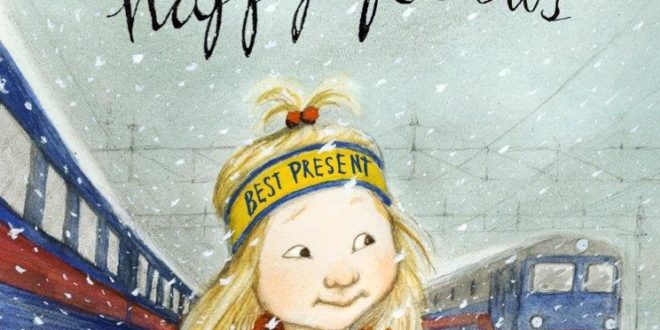 This heartfelt story by Swedish author Rose Lagercrantz is about Dani, a little Swedish girl who loves school, and about Cushion her classmate who is in love with her. But Dani won’t let him sit next to her. She is saving this place for her best friend Ella who has moved away to Northbrook hoping she will come back one day soon.

Dani’s mother died when she was three so when her solo dad goes off to Italy for a holiday by himself because he is feeling sad she has to stay with her grandparents. They do their best to make her stay enjoyable but what Dani really wants to do is to go to Ella’s birthday party.

As her grandparents are too busy to take her they reluctantly let her make the train journey from Stockholm to Northbrook by herself. This is a big adventure for Dani. She has never travelled solo before. But when she arrives in Northbrook there is no-one to meet her. What could possibly have gone wrong after everything had been so carefully arranged? Well actually there was one thing Grandma had not remembered, and neither had Dani.

As it is freezing cold the stationmaster takes her to the waiting room. She manages to ring her Dad’s girlfriend who lives in the same town just in time before a gang of nasty boys steal her cell phone.

When Sadie, her father’s girlfriend, comes to rescue she tells Dani her relationship with her Dad has broken down. Dani didn’t even know they were engaged to be married. Now she understands why he is feeling sad. She wishes they would get back together, but that’s now how life is.

It’s all too much for Dani. She develops a raging sore throat and has to go to bed when Sadie delivers her safely back to her grandparents’ house.

Then there is knock on the door and when Grandpa opens it Cushion is standing there to deliver a red rose to Dani in person. Will this be enough to persuade Dani to let him sit next to her at school?

Dani is the polar opposite to Pippy Longstocking, another famous little young Swedish girl in children’s literature. Pippi’s mother has also died and her father was lost at sea. She lives by herself, refuses to go to school and behaves in a daring outrageous way. Pippi is a very bad role model but kids love her.

Dani is much more true to life. She is not very brave or confident and she feels things deeply. Losing her best friend, coping with bullies and having to deal with her father’s broken relationship are situations which lots of children will be able to identify with.

Growing up can be hard. But on the positive side, Dani is surrounded by loving adults and a little admirer who is ever hopeful that he can win her heart.

It is a tender sensitively told story, a really enjoyable read for emergent readers from 5-7 years old.