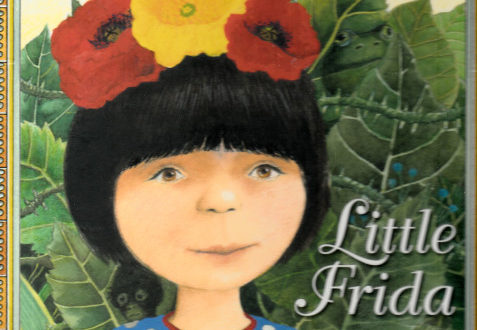 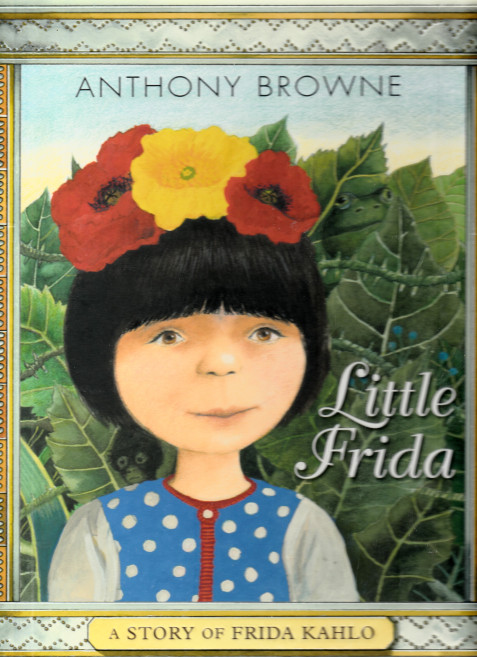 In Little Frida Anthony Browne tells a touching story from the childhood of Frida Kahlo, the world-famous Mexican painter

When she was six years old Frida caught polio and had to stay in bed for 9 months leaving her with a limp. The other children bullied her because she was different. But Frida had a great gift, which stayed with her all her life, a powerful imagination.

One day she breathed on a window until it was misty with condensation and drew a door on it with her finger. When she turned the handle and opened it she found herself in a vast and empty landscape. Her limp had magically disappeared and she could run as free as the wind.

She discovered another secret little door. Frida crawled through it and found herself slowly falling down into the depths of the earth where a new friend was waiting for her, a friend who looked very familiar. This friend listened to all of Frida’s problems, laughed with her and created a beautiful dance for her. Frida had never had a real friend before so this was a wonderful feeling.

Whenever Frida felt sad after that she would go back to see her and her friend would be waiting for her.

When she grew up Frida Kahlo made many self-portraits in which she mixed fantasy with reality, and in some of these, a grownup version of her imaginary friend (who was really her alter ego) appeared again. A reproduction of one these “The Two Fridas” can be found at the end of the book.

What makes this book special are the beautifully coloured surreal illustrations by Anthony Browne, former children’s laureate and twice winner of the Kate Greenaway Medal.

As you share this book with young children it can show them how through the power of your imagination you can escape into a happier world when, for whatever reason, you are feeling down.

Previous Article Balsamic roasted vegetables
Next Article Get out of danger