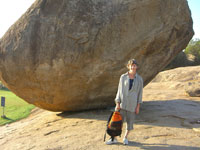 India. A country with a dizzying mix of cultures, languages and religions, all merging together to make a unique cocktail of sights, sounds and smells. India is home to over a billion people, making it the second most populated country in the world. It is also home to devastating levels of poverty, illiteracy and exploitation.

Volunteering had always a dream for Heather Campbell of New Zealand, but it was something she felt she had always been too busy for.

So, at the age of 53, when she realized she did have time, Heather volunteered with the Global Volunteer Network (GVN) for a month in India. A retired Physiotherapist, Heather was able to put her medical training to use by helping to develop programs for disabled children.

Volunteering in India provided Heather with the opportunity to get amongst a society completely different to her own.

'We did a lot of traveling around the countryside, looking at existing programs. We met families in quite isolated, very poor rural areas who had disabled children that lived in quite impoverished conditions, just seeing if we could, and how we could provide some help'.

She was shocked to see the conditions these people lived in, especially in some of the fishing villages she visited. Describing one house, Heather said 'the house had a dirt floor and the sides of the building were constructed with platted ferns and platted palm leaves, you could imagine what that's like in the monsoon.'

'They have very little furniture; they don't have a wheelchair for a child with cerebral palsy or anything like that. They don't even have beds; they just have a thin mat like we'd lie on the beach in the sand in.'

India is still under the grips of an ancient Hindu caste system which the people of India must live, marry and die under. This system results in extreme poverty for the 'dalit' people who are considered to live outside the four castes. People within this group are treated as if they don't exist, and the 'dalit' have living conditions which are considered some of the worst in the world.

'Some families exist on as little as two or three hundred rupees a month, which converts to six to nine New Zealand dollars', says Heather, reflecting on her trip. 'It is very difficult to imagine the circumstances, how these people live their lives on a daily basis, let alone without the added difficulty of having a child with a physical or mental impairment'.

'I came across a family who had a child with spina bifida, and the mother told me that the way they coped with this is that they dug a hole in the sand, they were in a fishing village, and then they buried the child in that hole up to his waist each day, so that the child could be upright'. 'Then it seems like he was more normal'.

'There was another village that we visited that had literally been built on a rubbish dump, and their job was to scavenge the rubbish, so if you could imagine your dwellings being just a few meters away from this stinking heap of refuge. It's very difficult to think of these people having to live in these sorts of conditions all their lives'.

Despite the intense poverty, Heather was able to see the positive aspects of the trip.

'I never saw so many smiley children in all my life' she says, laughing, 'and they had absolutely nothing, I never saw them with a toy, yet they all played, and ran around, and they were happy, and they laughed, but they just had nothing. Some of them didn't even have clothes, maybe one item of clothing, maybe one t-shirt or one pair of pants, but hardly ever both'.

India has some shocking statistics, surrounding the quality of life for its inhabitants. Every year in India, almost 2 million children will die before their first birthday, due to extreme poverty. Only 61.1% of the population is literate, and child labour is still a big problem throughout India.

Due to sex-selective abortion and infanticide, there are only 927 girls for every 1,000 boys under the age of 6. This is the most imbalanced ratio in the world, and it is declining each year. The Indian government is attempting to address its massive overpopulation, and poverty issues, but still has a long way to go.

One particular memory that sticks in Heather's mind was visiting a rare government funded centre for disabled preschoolers.

'The first time I went there I was pretty shocked, and pretty appalled at how it was all working and happening. There was just one small room, with all these people sitting on a concrete floor, there were really no toys about, no stimulus for the children. One child would be treated at a time by a therapist, who wasn't a physiotherapist; she just called herself a therapist. It was the same treatment for every child, which was very forceful, and my first impressions were that it was really quite cruel and barbaric. The child screamed its head off, as this woman forced spastic limbs through full range of movement' says Heather, recalling the trauma.

'But, you've got to put it into perspective and think 'this is rural India', you can't compare it to how we would do things'. 'There are lots of really positive aspects of bringing together these families'. 'It's offering support for these parents, and providing a place where they can meet and socialize with other parents who have children with similar problems. The clinic is open five days a week, and there is some sort of treatment going on there, so maybe we can build on this, and start introducing other treatments.' 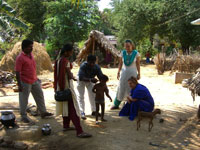 Those treatments included exercise programs to learn how to use their limbs to the best of their ability, by propping, rolling and balance. Also, Heather's team was able to assist by donating a box of toys and books.

Upon returning a while later to the same centre, Heather was surprised and proud of the progress that had been made.

'It was just such a different atmosphere, and when we opened the door and went in, every child had a toy in his hand, or the mother had a book in her hand showing it to the child. Unfortunately the child on the treatment table was still screaming, but it was like 'this is progress'. 'You're working within their system, and you're helping them to achieve better outcomes, and perhaps just introducing things that will help, but working along side of them. We weren't saying 'hey, you are doing this all wrong, and this is awful, and you shouldn't be doing this', we were just showing them that there are other ways as well'.

'I didn't think we were going to make any major changes or do anything like that, but little things happened, sometimes it is nice just to think that you make a difference, even if it is only a very small difference'. 'I enjoyed being a volunteer, I enjoyed the sense of purpose that we had.'

Heather is keen to recommend volunteering to the more mature traveler, and sees volunteering as a useful and satisfying experience.

'Although we might be older, I think sometimes years bring a certain amount of experience, practical experience. The more that older people volunteer, the better for the program! It's quite different from being a tourist, but it's really worthwhile, and I hope more people do volunteer'.

To find out more about volunteering see www.volunteer.org.nz