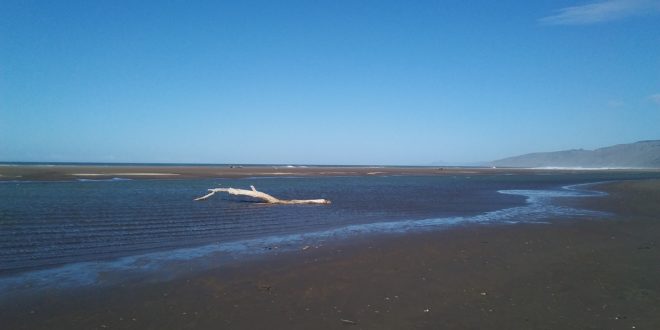 The beaches are wide and welcoming.
Explore New Zealand

Haven’t heard of Herbertville? Neither have most people – which is why this cute coastal hamlet makes the perfect summer hideaway. A little settlement of holiday homes and a few permanent residences, Herbertville can be found at the end of one of those roads you think is too remote to follow. Take it, however, and you’ll arrive at a beach just 4.5km south of Cape Turnagain. The cape was named by explorer James Cook and marks the location where he turned his ship back to retrace its previous route.

Herbertville is iconically vintage, and its size belies the fact that it was once a vibrant community sporting a grand hotel, shops, a police station and even a blacksmith. Without any harbour, schooners carrying cargo and passengers destined for larger settlements such as Dannevirke and Waipukurau would beach themselves on the adjacent long expanse of sand from where everything could be unloaded. Come high tide, the boats would be floated off again.

Today, all that remains of the busy past is the Beachhaven Inn, a 9 hole golf course, and a quaint camping ground festooned with DIY baches, and caravans with lean-tos.

The shareholder-operated camping ground, which occasionally advertises its tiny beach houses for sale, attracts plenty of regulars but also has accommodation for newbies in the form of cabins, caravan and tent sites. One of those delightfully dune-backed establishments, the camp is the sort of place where you’ll always find spare pot and pans in the kitchen,  a freezer for your Christmas dinner supplies, and a fridge specially designated to hold fishing bait!

Right across the road from the camp, at Beachhaven Inn, you can grab a morning coffee or a meal, and there’s no problem reaching the beach if you’ve had a couple of beers and don’t want to drive – the sand is barely a kilometre away.

Long casting is the way to haul in the fish in this part of the country –  lemonfish, kahawai, trevally, and even the occasional holidaymakers can be caught with a tall rod at your disposal, or a Kontiki if you know what you’re doing. Even if it does entail losing a bit of bait along the way (sharks also patrol the surf), there’s nothing like a fry-up on the barbie to keep you casting!

When fishing and beachcombing pall, the Cape Turnagain Golf Club offers casual users a recreational round on its greens. With its modern club buildings and views along the coast to its namesake, the club is officially open from midday on Sundays from March to November, but for a green fee of just $10 a round, holidaymakers make a beeline for the dune-backed fairways.

Herbertville is so laid back you may want to laze there forever, but there are other destinations to be enjoyed, all within easy reach. Just a few minutes up the road you’ll find an old-world establishment in the form of the Wimbledon Tavern. It’s everything a colonial-style pub should be, from the cold cider to the fish and chips – and a round pool table thrown in! Keeping with tradition, there are also tennis courts at Wimbledon, and a public pool (50 cents per person).

An hour’s drive from Herbertville on Route 52 will take you to the dramatic 25 metre high Waihi Falls set in scenic reserve (allow 20 minutes return walk from the car park to reach them) or if you’re up for a beach walk, head along the sand north of Herbertville to the fur seal colony at Cape Turnagain (before you set out, check safety and tide information, and follow Department of Conservation guidelines on how to behave around seals and other marine wildlife). On your way, look out for remnants of the old old-world on the rocks, where farmers would store their wool before it’s shipped off for sale.

Previous Article Going solo to the world: Top tips for solo travellers over 50
Next Article How to find solitude this Christmas