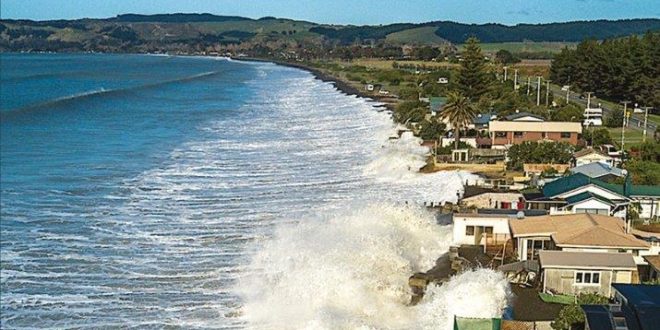 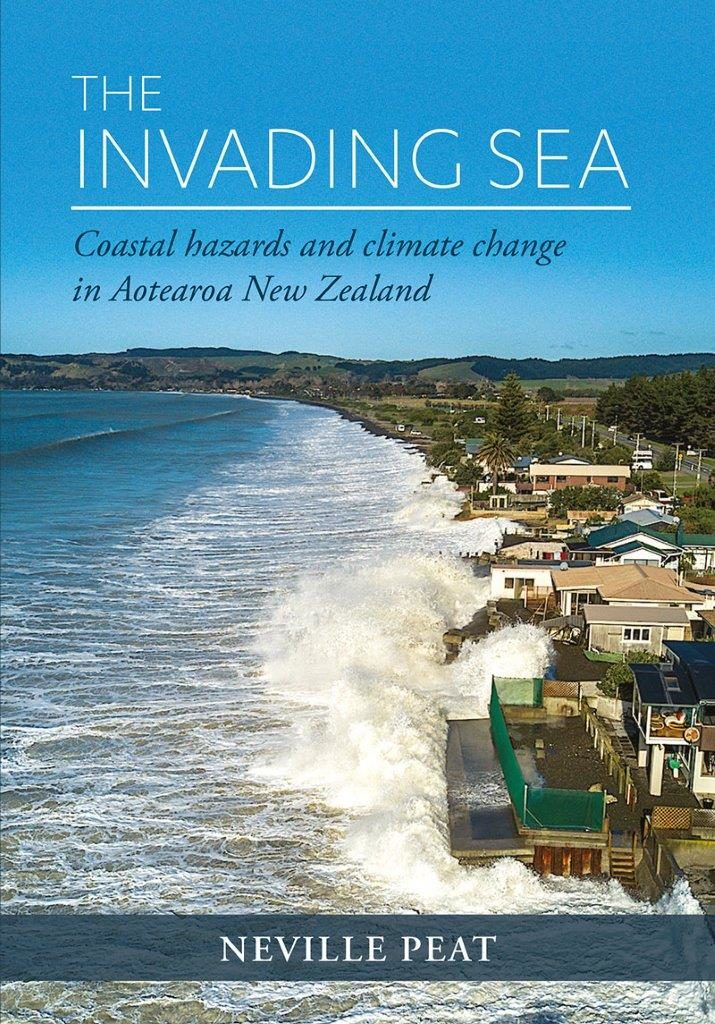 Neville Peat paints a very disturbing picture In The Invading Sea of how much of New Zealand’s coastline is already under attack due to the effects of rising sea levels, an eroding coastline and the facts of climate change. It is an excellent eye-opener for all New Zealanders, well written and quite easy for a lay-person to read.

In the first part of this book he covers the causes of a rising sea: an ocean expands as it gets warmer, melting ice from glaciers adds to the volume in the sea, and as storms become bigger so do their associated storm surges. The increased intensity and number of storms also contribute to coastal erosion and the amount of water dumped onto the land.

Next, the book takes us on a journey of the New Zealand coastline showing with words and photographs the numerous areas in this country where coastal erosion and/or flooding has already occurred or is more than likely do so in the foreseeable future. This part of the book is an essential read for anyone with an interest, or intended interest, in land near the coast, or even in city areas such as Christchurch or Dunedin.

In many cases, both residents and local councils have tried to stop the inundation, usually at considerable expense and also often unsuccessfully. A variety of remedies has been tried including the construction of rock walls and encouragement of sand dunes and vegetation.

Who should compensate the owners for the inundation of their often expensive beach-front private properties is a vexing question. Should it be the local council that issued the building permit, the property owner, or perhaps society, meaning central government, as a whole? Insurance companies and banks also have a part to play. The book explores all these possibilities.

Often councils have shown a lack of foresight and planning and have been reactionary and ad hoc in their response. It is suggested that there needs to be a National Policy framework to provide more guidance and direction to councils although one shoe won’t fit all as the problems are so diverse in different areas.

Another chapter looks at three of the most vulnerable low lying Polynesian atoll states, the Tokelaus, Tuvalu and Kiribati. Faced with very uncertain futures due to rising seas and climate change, they are battling for survival with help from the international community.

The last chapter in the book points out that climate change is not something to leave up to a future generation to deal with.

“The responsibility for reining in our greenhouse gas emissions and more particularly for adapting to coastal hazards requires decisions and actions right now.” he writes.

It is shameful that New Zealand has failed to achieve its greenhouse emission reduction targets.  But the commitment to doing this has greatly increased since the 2017 election of a new government.

“We will take climate change seriously. This is my generation’s nuclear-free moment, and I am determined that we will tackle it head-on.” Jacinda Ardern has promised.

But are we too late? Neville Peat is still hopeful that although the situation is extremely serious and will be for generations to come, if we (and the rest of the world) are prepared to take action from now on, there is still hope.

Neville Peat is a well-known writer on environmental issues and with a long period as a city councillor in Dunedin is ideally placed to write on these issues. I very much recommend this book.

The Invading Sea is by Neville Peat. RRP $38.00. Publisher: The Cuba Press.