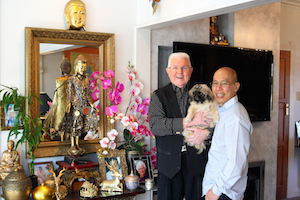 “To celebrate Auckland’s 175th year, Auckland Museum brings you a special home-grown exhibition about the city – Taku Tamaki – Auckland Stories. As part of the exhibition they are collecting stories from the public about their memories and experiences of Auckland. Our columnist David Hartnell,  shares his story below, share yours at http://woobox.com/y6tkgy for your chance to win an exclusive after hours experience at the museum.”

I was born at Nurse Coyle’s private nursing home in Sandringham Road, in Auckland on the 29th June 1944.

My mother had always pointed the house out to me as we went past. ‘You were born in the front room,’ she would say. ‘They had swastikas on the ceiling.’

I always thought it sounded odd, so I recently went back to have a look at the ceiling and see if it were true. Indeed the swastikas are still there – but they’re broken in the opposite direction to Nazi swastikas.

Supposedly they’re a symbol of good luck! ‘You’re lucky indeed,’ said Deborah Carter, who owned the house with her partner, Steve Price. ‘I wanted to have them filled in, at first. I didn’t like them. Then someone pointed out to me that they’re going the other way, so they’re considered lucky, and I decided to leave them.’

I love New Zealand and New Zealanders – we are such passionate people. I have lived in London, New York, California, Hong Kong and Thailand, but my all-time favourite place on earth is Auckland. We live right by the Auckland Zoo and every time I take our dog for a walk we see monkeys, and in ten minutes we can be at the waterfront, twenty minutes later walking in the bush — what other city in the world can you do that?

As Dorothy said in the Wizard of Oz said “There’s no place like home” and that’s how I feel about Auckland. 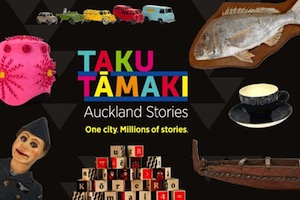 Share your story for the chance to win!
Share your own story, and picture if you have one, about Auckland and be in to WIN an exclusive after-hours guided tour with one of our curators, followed by a private dinner at the museum for you and 3 friends!

About the exhibition:
As Auckland marks its 175th year, this special home-grown exhibition invites you to become explorers of the city. Full of inspiring and curious things to see and do, you’ll discover what the city is about, what shaped it and where it might be headed.

Highlights include never-before-seen collection items and images, an interactive game that allows you to connect the dots as a museum curator, and a nostalgic journey back to a 1980s’ dairy.

Check out Peter Madden’s stunning art installation, watch a selection of fun films, and a display which honours heroes of our city.