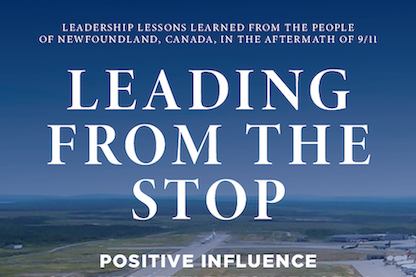 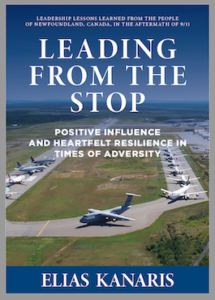 Twenty years after 9/11, Elias Kanaris shares an insider’s view of being on one of the diverted planes to Gander International Airport and lessons learnt during that fateful time.

Elias Kanaris offers an insider’s view of what happened on 9/11 when the plane he was flying on was diverted, alongside another 37 planes, to Gander International Airport due to the terrorist acts in NYC and DC. What the passengers expected was going to be a short layover, turned into five days as they were hosted by the Salvation Army in Newfoundland, Canada.

Kanaris details how the town transformed from 9,300 locals to 16,000 people needing to be housed and feed through three lenses. He reviews it from the locals’ viewpoint (fondly referred to as the ‘Newfies’), the United Airlines pilot and crew, and other passengers.

Whether you’re leading a multinational or leading yourself, Kanaris offers leadership lessons learned from the people of Newfoundland, Canada, in the aftermath of 9/11. In this book, Elias Kanaris takes us through the transition that he and other passengers had to make during this extraordinary time.

What transition do you need to make right now? And do you have enough resilience to say, ‘I can make it!’

ELIAS KANARIS is an author, professional keynote speaker, executive coach, leadership trainer, and entrepreneur. He has been a regular keynote presenter. He has frequently spoken to audiences in the I.T., telecommunications, insurance, financial services, real estate, and education sectors across thirteen countries on four continents.

Born in North Africa, he had to learn to adapt when, at the age of 8, his family emigrated to establish a new life in London, England. He had to learn about a new culture, adjust to a different cuisine and integrate with others who had distinct accents. Elias left the UK to travel to the other side of the world, re-establishing himself in New Zealand in his early 30’s.

Elias has been a senior consultant in the I.T. and Telecommunications sector. He was part of a team responsible for his company’s top twenty-four clients, which billed $450 million per annum. Elias is also a founding partner of the John Maxwell Team (JMT) – the largest and fastest-growing leadership training organisation in the world, serving on the President’s Advisory Council (PAC). Elias served as the National President for the Professional Speakers Association of New Zealand (2015-2017). He also served as President of the Global Speakers Federation (2018-2019), a US$4 Billion industry that represents Professional Speakers globally.

Elias was a passenger on flight UA929, bound to Chicago O’Hare from London Heathrow, when his plane became one of 38 that was diverted to Gander airport in Newfoundland, Canada. When his world seemed to stop in a heartbeat, Elias had to dig deep into his store of resilience to navigate through this new normal.

Elias now lives in Murrays Bay in Auckland with his family. Leading from the Stop is his third book.

Previous Article Joke of the Day
Next Article COMP CLOSED: Book Giveaway: Leading from the Stop