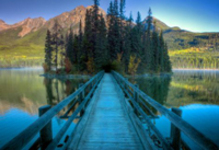 Although trains are not nearly as ubiquitous and convenient a mode of travel in North America as in Europe, they remain popular with some travelers because of the spacious design of the cars, the scenic routes, and the overall comfort of the train ride. Some people prefer to take trains because they do not require long waits at security like at airports, or because they are uncomfortable with flying. Unfortunately, unlike their European counterparts, passenger trains in Canada outside the urban cores can often be off-schedule, sometimes up to several hours late. Train rides in Canada often take much longer than car rides and plane rides, but, when the service is running well, the unique experience can trump the long ride.

All trains will have coach seats. For longer rides many trains have sleeper rooms. The price of these rooms depends on the quality – whether or not there is a sink, or a private shower/toilet. You will pay a considerable supplement for sleeper car service in addition to the regular fare.

Canada's railway system primarily transports freight, and freight has priority over rail-line use. Therefore, passenger trains are often delayed. The country's two major railway companies, Canadian National Railway and Canadian Pacific Railway, turned over operation of their passenger services in 1978 to VIA Rail Canada. In addition to VIA Rail, a few smaller railways in remote areas of Canada also offer passenger service. As well, Montreal, Toronto, and Vancouver have commuter rail systems. There are also a large number of companies that offer excursion services primarily geared towards tourists.

The Canadian. Runs from Toronto to Vancouver via Winnipeg, Edmonton, and Jasper. VIA Rail's flagship service and now the only remaining service to cross Canada's prairies. The complete journey takes three days. A seat in Comfort (economy or coach) is around $550 before discounts; comfortable sleeper accommodations are also available.

The Hudson Bay. Connecting with the Canadian in Winnipeg, the Hudson Bay takes travelers from the south to the far north of the province of Manitoba, with three departures a week to Churchill via The Pas and Thompson. A connecting state-subsidised service is available from The Pas to Pukatawagan, principally for the native communities in that region of Manitoba. The train is popular with winter tourists who travel north to see Churchill's population of polar bears and tends to sell out early.

The Skeena. The Skeena connects with the Canadian in Jasper National Park and operates to Prince Rupert. From Prince Rupert one can take ferries to Alaska or Queen Charlotte islands.

Quebec – Ontario Corridor. VIA Rail's offers its most comprehensive intercity passenger service between the cities of Quebec City , Montreal, Ottawa, Kingston, Toronto, Sarnia, and Windsor. This route operates more than 30 departures in either direction on weekdays, and is as popular with business travellers as tourists due to fast services that are, in most cases, as fast downtown-to-downtown as commercial airlines.

The Ocean. Six departures a week make the journey from Montreal to Halifax via Moncton and Truro. The train operates with modern European Renaissance cars, famously purchased by VIA Rail when planned sleeper services through the Channel Tunnel from Great Britain to mainland Europe were cut.

VIA Rail offers hikers, kayakers and residents of remote regions the option of special stops at almost any point on several rural routes, as long as passengers purchase their tickets and specify their exact destination 48 hours in advance. This is not available on all routes: most importantly, the Quebec-Ontario corridor is excluded, as are the prairies west of Winnipeg. Please consult the link for more information on stops that are permitted.

Has anyone done the Toronto -Vancouver trip with Via Rail. If so how correct is this article as regards the three day journey as my research shows it takes at least five days. We are intending to do the trip late August 2011 so any information on ticketing and experiences would be most welcome
BigK

When deciding that you are going to travel to see the many different beautiful landscapes ...