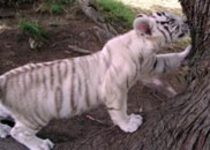 For the past decade I have worked in deep tissue massage treating thousands of people for injury and assisting in resolving emotional issues and trauma.  As well as that over the years I’ve performed deep tissue massage on all sorts of animals. From dogs in refuges with displaysure and depression to dogs and cats with bad attitudes (two come to mind nicknamed respectively Devil and Satan) plus horses Llamas even Tiger cubs.

Friends will often gently suggest (ask) that I do a bit of deep tissue massage on an injured pet, such as older dogs that still think they’re puppies and overdo a morning in the park, or hyper dogs that won’t stop barking and jumping up on people, and I love doing it.

Occasionally however, I get the chance to really a change an animal’s life. It’s such a pleasure to do when you know how that I figured it’s about time I passed on what I’ve learned.

First up, I’ll start with an example. A few weeks ago we were at an outdoor café and I noticed a couple with a beautiful big gentle dog. It was a Swiss breed similar to a St Bernard in size, I believe it was a Bernese Mountain Dog. He was a really lovely dog but he was nervous, very unhappy and trying to hide his head under the table and his owners legs the whole time.

It was very sad to watch as he was clearly distressed and his owners were really trying so hard to comfort him and cheer him up. My companion knew I couldn’t sit and watch this for long so she gave me a smile, nodded a silent agreement, and I offered to give them some help.

Turns out he’d lost his brother two weeks before and he had been at a loss ever since, not his normal upbeat self, skittish and nervous and clearly very sad.

Imagine grieving a family member, being stressed, chased or bullied, or in a new environment that makes you nervous. Now imagine you had no one to listen to you or understand where you hurt and how bad you felt. There‘s a lot massage can do to help and animal like this. We humans aren’t the only ones that can get substantial benefit from massage therapy.

Massage can be calming and healing for animals in physical or emotional pain too, and human and animal massage for the relief of stress, is done in very similar ways, in almost all the same places.

I’ve made up a quick chart as a guide to get you started and listed a few pointers to give you a bit more understanding. Start out gently but expect that you really will need to get quite firm as you move on. 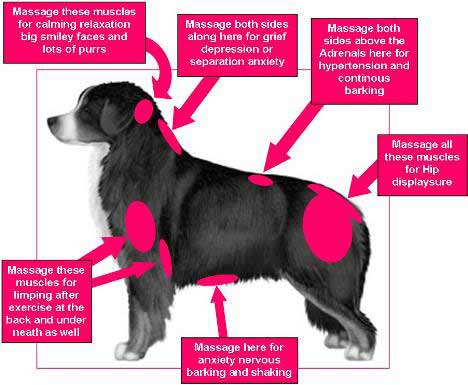 If your pet has been rescued from abuse even years later the same old muscles can be rock hard and ready to react, someone only has to lift up their foot or hand and it can appear threatening to an animal that’s had a hard life. Regular massage can help reduce this tension, help them to forget the bad old days, and keep their muscles relaxed and ready for the challenges of their day. All you have to do is find out where the tension spots are.

We all know that stress can make us ache all over and the muscle tension involved can cause you to end up with a sore jaw, neck, back or stomach. Ongoing tension in your muscles triggers the bodies fight and flight responses into action and this means you end up being flooded with all sorts of stimulating chemicals that won’t ever let you relax, calm down, and feel normal again until they are released.

Like us, cats and dogs Adrenal glands produce Noradrenaline and adrenaline these act as stimulants to the nervous system. If there is hyper-function from being overstressed your pet, just like a human, simply can’t calm down, creating anxiety states leading to barking, jumping or claw strikes without warning, plus shaking, diarrhoea, abdominal pain vomiting and depression

The adrenals we mentioned earlier are situated on the back of the animal they fire up when animals are angry, upset, being chased, or feeling stressed. The belly region is where animals feel fear guilt and anxiety. (watch them slink along if they’ve done something naughty) The grief and emotional loss zones are between the shoulders both sides of the spine on the upper back.

Forelegs on the outside of the shoulders plus up high under the ‘arm pit’ can get sore from running around and other areas that can get tense include the inside of the back legs and tension on top of the hips both side of the spine, and outside of the rear flanks, which can contribute to hip dysplasia. Cats worst points are deep in the neck muscles and in behind the ears.

A good start point in to begin on the neck both for cats and dogs. Use a gentle fingertip action to get them used to the massage and relaxed, then start working deeper and you move around their body. If you’re doing it right they will assume a submissive sitting position or roll onto their backs, cats start purring and dogs wag their tails non-stop.

Good luck. I hope you enjoy a bit of interaction that can really make a difference in your animals life. Oh and the big sad dog, well after a few minutes of deep tissue between his shoulders and getting his adrenals released plus a little tummy rub he was last seen wagging his tail furiously making friends with all and sundry and no longer hiding his head under the table.

Walkies (with your cat!)

Can Cats Learn Tricks? You Bet!

Pet Talk – how to cushion the ride for your feline friend 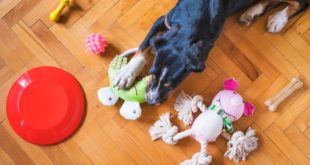 Dog Entertainment When You’re Out of the House

The home can be a lonely place for your dog especially if he or she is the only one there for hours on end. Here are some tips to keep your puppy happy!